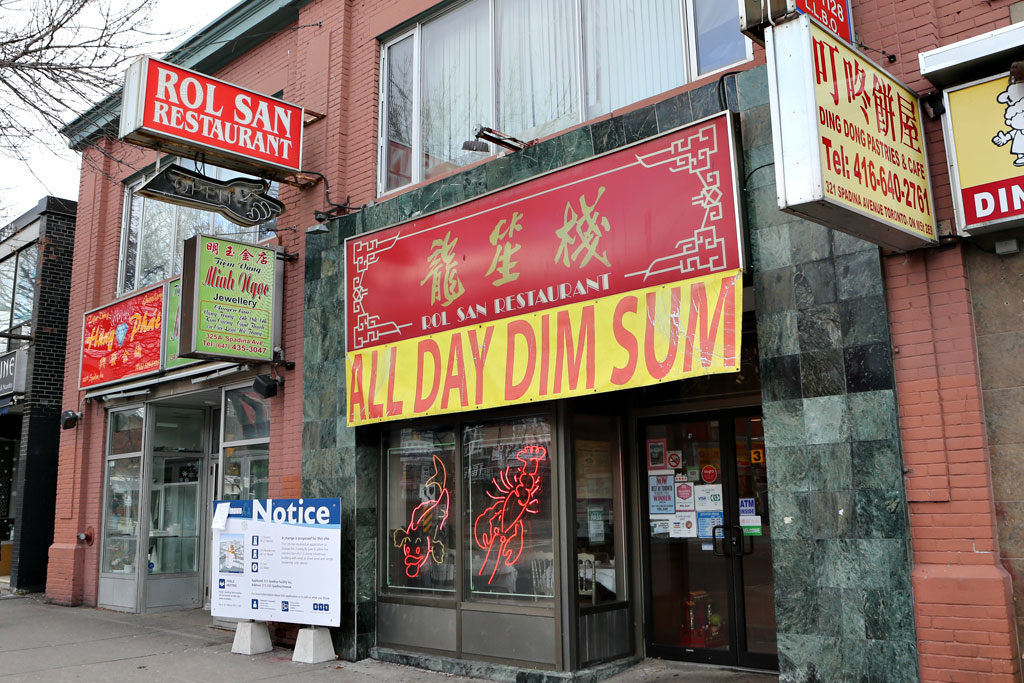 It’s hard to imagine what Toronto will look like in five years, let alone a neighbourhood such as Chinatown. The most pessimistic of Torontonians might joke that the city will be nothing but dispensary chains and condominiums in the future. Still, there are others here fighting to preserve the unique cultural heritage of Toronto’s neighbourhoods in the face of gentrification and skyrocketing real estate costs.

Beloved Chinatown staples Rol San Restaurant and Ding Dong Pastries & Cafe are located at the site of the development, and their futures remain uncertain.

Community groups like Friends of Chinatown TO (FOCT) organized to try and stop the development since its proposal in July 2019, arguing that the condominium would displace working-class residents and small businesses and demanding that the building consists of 100 per cent affordable housing units.

Ultimately, the development was approved, with 22 of the 219 units being set aside as affordable housing for 40 years as subsidized by Toronto’s Open Door program and with restrictions placed on the leasing of commercial units. Notably, no chain stores will be allowed on site.

Mike Layton spoke with TRNTO about the planning study, who explained “it’s important to recognize that the heritage goes beyond the buildings themselves. It involves the people at the building, and I think that that’s an important aspect that often gets left out of planning studies.”

The planning study responded to community groups pushing for further protections in Toronto’s Chinatown, especially in response to the 315-325 Spadina development. Although it is preliminary, Mike Layton stressed that affordable housing and the protection of small businesses would be an essential element.

“The city takes seriously our obligation to build better neighbourhoods and not just build the same neighbourhood over and over again, which a lot of new development does. […] And so I hope that this study does that; tries to find new ways of protecting what makes our neighbourhoods great.”

Still, the 315-325 Spadina development is one chapter in a long history of the displacement and gentrification of Toronto’s Chinatown.

The heritage of Toronto’s Chinatown dates back to the late 1870s when Sam Ching opened the first Chinese business in the city. An enclave of Chinese immigrants formed on Elizabeth Street, and by the 1940s, the community was the third-largest in Canada, boasting a mix of political groups, community organizations, shops, theatres, and miscellaneous businesses.

TRNTO reached out to Arlene Chan, a local historian, author of seven books (including a biography of her mother Jean Lumb titled Spirit of the Dragon: The Story of Jean Lumb, a Proud Chinese-Canadian), and retired Toronto librarian, to talk about her extensive research into the history and heritage of Toronto’s Chinatown.

She also just released a four-part series about Chinese food and history for Toronto History Museums, available on YouTube.

Chan grew up in the neighbourhood.

However, the construction of a new Toronto city hall and Nathan Phillips Square in the area displaced many residents and business owners in Toronto’s original Chinatown. Although a community group led by Jean Lumb fought to preserve businesses and residences, ultimately many were demolished to make way for the new development.

“That was not a part of the city planning process — community consultation,” she said. “It was a very unhappy time and it really displaced Chinese people from places that they moved into because it was a community, they felt safe. It was affordable.”

Still, real estate prices in the area skyrocketed, and many long-term residents who could no longer afford to live in the neighbourhood moved onto Dundas Street West, forming today’s downtown Chinatown.

Today’s Chinatown faces many of the same issues. As Chan says, “They’re all facing the same challenges of developers wanting to come in and tear down the old and build anew.”

“I’m not against new things happening, but I just think there has to be a planned approach. In terms of city planning, there has to be a lot of community consultation, which even to this day is not happening. Effectively, more consideration has to be given to the people who are living there,” she said.

“I think it’s so important for us to have our Chinatown because it’s a community of people that are not only visiting, but also living there, going to school there, eating there, making a living there. That’s what makes a community vibrant and what will sustain the community, too.”

Chinatown isn’t alone; Toronto has a long history of displacing community enclaves, either through gentrification or displacement.

The Village, Toronto’s historic gay neighbourhood, is another area facing the crossroads between commercial development and community.

Homosexuality was only decriminalized federally in 1969. Although the LGBTQ2S community in Toronto still existed in places such as the lesbian-friendly space The Continential Hotel Bar, the Church and Wellesley area really began to boom as the city’s “gaybourhood” in the 1980s.

Today, the area faces rising real estate costs that are pushing beloved businesses and long-time residents out of the area. The 519 community centre, a cornerstone of The Village community, penned a public letter to Minister Morneau, Premier Ford, Ms. Suze Morrison MPP, and Mayor John Tory on May 8th, 2020.

The letter addresses the impact of both the COVID-19 pandemic and gentrification on the LGBTQ2S community, imploring the politicians to address the high real estate costs and neighbourhood gentrification, including calls for commercial rent relief, interest relief on debt, and financial aid. It also addresses a rise in homophobic and transphobic attacks and increasing community mental health issues.

Kensington Market is another historic neighbourhood facing the same dilemma, as gentrification and real estate prices push out the residents and businesses that make the area as eclectically appealing as it is.

Residents of the area say that landlords are evicting current tenants, renovating and increasing the rent, decreasing housing security for area residents and contributing to gentrification in Kensington Market.

Recently, the Kensington Market Community Land Trust (KMCLT) purchased 54-56 Kensington Ave. with a 99-year, $3 million loan from the city in order to ensure that there is still affordable housing in the area.

In Toronto’s Little Jamaica, solutions are being explored for the same issues; gentrification, affordable housing, and the preservation of community. This is especially important in the face of systemic anti-Black racism, as Little Jamaica has the highest concentration of Black-owned businesses in Toronto.

The city, in collaboration with local grassroots community groups such as Black Urbanism TO, is exploring a holistic array of options to preserve the unique community of the area, including land trusts, farmer’s markets, food festivals, and a possible designation as a Heritage Conservation District.

Meanwhile, Toronto real estate prices continue to skyrocket, with the city clocking in second on the list of most unaffordable metro areas in North America, according to a new study from Oxford Economics.

Still, it has nothing on Vancouver, which officially edged out other North American competitors like New York City and San Francisco for the dubious honour of being the number one least affordable city.

Vancouver’s Chinatown faces many of the same problems as Toronto’s Chinatown, as rising housing costs and condominium developments displace the area’s working-class residents.

In 2017, similar to the battle over 315-325 Spadina in Toronto, the community fought to prevent the development of a condominium at 105 Keefer St., demanding that the site be used for 100 per cent affordable low-income housing instead of luxury condos — and they won.

As one of Vancouver’s low-income neighbourhoods, Chinatown is still threatened by gentrification despite this victory; rezoning, developments, and evictions are pushing out residents who are asking for the area to be seen as a community instead of a redevelopment opportunity by policymakers.

In the United States, San Francisco’s Chinatown might be one of the city’s most popular tourist destinations, but the neighbourhood is also a haven and a community enclave for tens of thousands of predominantly Chinese residents.

When the 1906 earthquake killed many residents and destroyed their homes and businesses, the city threatened to displace the Chinese community in the area. In response, community leaders turned the neighbourhood into a tourist attraction in order to survive and preserve the community hub.

Although nearly 30 per cent of area residents live under the poverty line, they are able to stay in an otherwise incredibly expensive city due to the neighbourhood’s affordable Single Room Occupancy (SRO) housing. This affordable housing is not perfect — for example, many buildings do not have accessible elevators but do have reported health and safety violations — but has nonetheless allowed low-income and older adults to stay in the neighbourhood.

Still, the area is at crosshairs between tourist development and community preservation, as are many neighbourhoods in San Francisco. The tech boom brought in high-paid tech workers, many of whom live in the luxury condominiums pushing out working-class residents.

On the east coast, New York City’s Harlem neighbourhood, a historically predominantly Black area and the home of the Harlem Renaissance, is facing a gentrification crisis. Black residents are being priced out of housing, and white residents are moving in at significantly higher rates.

As housing costs soar, a lack of political action to provide affordable housing options to area residents left many with no choice but to organize. Groups like Save Harlem Now! are dedicated to preserving Harlem’s heritage through the submission of historic districts to the Landmarks Preservation Commission (LPC).

Ultimately, the solutions are complex, but they exist. These neighbourhoods are not historical artifacts but living, breathing heritage and community — and the communities know exactly what they need to survive. It’s just a matter of listening.