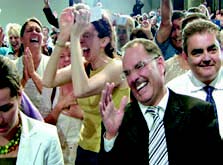 THE ROOTS OF laughter is a topic that is hard to resist. The subject was turned inside out at a recent Hot Docs festival screening of Albert Nerenberg’s movie Laughology.

Nerenberg is the Montrealbased filmmaker behind Let’s All Hate Toronto and Stupidity. As you can tell, Nerenberg is no dry documentarian, but a fun pop culturist whose work suggests a lighter, gentler Michael Moore.

As the film begins, Nerenberg tells us he was in a personal funk. His wife was pregnant, but her father died late into her pregnancy. He had lost the power to laugh but then noticed his newborn laughing hysterically, seemingly for no reason at all.

And so began Nerenberg’s quest to find out the secret of laughter. Note, though, that it’s laughter that interests him, not humour. It’s the actual physical and somatic reaction of the body that he decides is the interesting part of the equation.

He knows one thing for sure: it feels good to laugh. From this obvious but overlooked beginning, Nerenberg travels the world to get to the bottom of it all. He meets with academics, mystics, everybody, it seems, but actual comedians.

He decides that “laughter without cause” or “reason” is the most worthwhile and trustworthy form. It is laughter free of agenda, a laughter that does not need jokes, a laughter that is pure of heart that can unite the world.

I investigated “laughter without reason” a few years ago in this column, meeting with the principals in the Toronto Laughter Society who espoused the values Nerenberg found in India and around the world. I thought it was a valuable contribution to psychic release and a benign form of therapy. I still do, but with the passing of time, I’ve begun to see its limitations.

The release feels great but is short-lived and involves the body, but not the mind. “Laughter with cause,” namely comedy, involves the body and the mind, perhaps even the emotions, too. Watching a brilliant comedian makes me react in all these ways; better yet, I might still laugh tomorrow or next week. The experience, I feel, is so much deeper.

The best part of Nerenberg’s film is an interview with Doug Collins from Memphis, “the world’s most contagious laugher,” and darned if it isn’t so. You cannot watch this man laugh without laughing yourself. It defies description.

Scenes of Nerenberg laughing with Ugandan children are moving and make the point of laughter being a universal language.

Underscoring that point was the short film by Barry Avrich that opened the evening. Amerika Idol which is about a small town in Serbia that believes that erecting a statue of Rocky Balboa will change the 4,000 years of bad luck endured by the village.

A masterpiece of deadpan humour, this real-life Borat had me howling throughout its 30- minute running time. The statue is finally cast in concrete instead of costly iron or marble. The finished product is a homely version, but it gets done, everyone is happy, and there are lots of laughs along the way.

As I write this, I’m still laughing. But I guess that’s what happens when you laugh for a reason.