Chef Stuart Cameron, the man behind a growing culinary empire - Streets Of Toronto
Skip to content 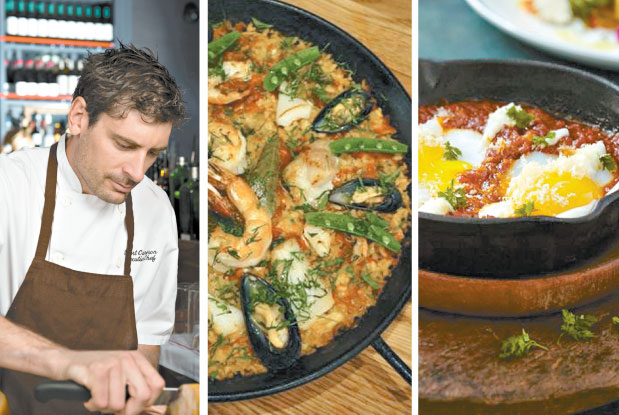 Stuart Cameron, the chef behind a number of Hanif Harji and Charles Khabouth’s Toronto restaurants

The setting is Byblos restaurant, Thursday morning. Chef Stuart Cameron is starting his workday, and he needs to eat. He’s so busy these days that sometimes he forgets to feed himself, so the first order of business is breakfast. Today, it’s sunny-side-up eggs with toast and shakshuka sauce. He will not get far into his meal before people start asking him questions.

He sits down to eat. He is wearing jeans, a plaid shirt, a black New York Yankees snapback and Birkenstock chef shoes. On the table is his to-do list, which is tucked into a clipboard and scrawled out in red marker. The list is long, like it is most days. Meetings. Plumbing. Staff issues. Equipment repairs. Computers. And catering. Catering is a constant worry.

Kanida Chey, Cameron’s right-hand man, enters the scene. He has just wrapped up a tactical rundown with some cooks, and now he needs to discuss minutiae about the catering for an upcoming wedding.

“Do we still have those quail eggs?” Chey asks. Cameron thinks for a minute.

One could easily wonder how Cameron keeps track of the quail eggs, or the bazillions of other ingredients at the many restaurants he’s responsible for across Toronto. He is the executive chef for restaurateur Hanif Harji’s rapidly growing hospitality group, Icon Legacy. In 2012, Icon Legacy teamed up with Ink Entertainment, nightclub king Charles Khabouth’s umbrella group, to open a series of new restaurants, with Cameron in charge of the food. The three restaurants that Cameron has helped open since then — Weslodge, Patria and Byblos — have been among the most critically acclaimed venues that Harji or Khabouth have ever opened.

This, of course, means more work for Cameron. His bosses are happy with him. He seems to have an uncanny ability to take on the cuisine of any culture; he was trained in Italian food, but has since taught himself Spanish cuisine (for Patria) and Mediterranean (for Byblos) through solo research alone. Thus, he will be opening more restaurants in the future. He also oversees catering at the Storys building  — during TIFF, it can host up to five events per day — as well as the catering at nightclubs F-Stop and Switch.

Eons ago, Cameron was just a regular chef. Which is to say, he wasn’t in charge of a staff of over 90 or an event planner or a furious multitasker. He was born in a small town near Melbourne, Australia, and he was inspired to get into cooking from a home economics class. When he was 14, he took on a workplace internship at a local restaurant. It wasn’t long before he dropped out of high school to focus on cooking full-time.

Later, he would attend culinary school at the Box Hill Institute and work his way up the ranks in his home country before moving to Canada (for love, of course). After a year at Lagoshore in Port Credit, Cameron applied for a job at Nyood, a Queen West hot spot from Harji that was in the process of opening at the time. He got the job and worked under chef Roger Mooking (who is now a television personality on the Food Network).

When Harji and Khabouth partnered up to solidify their grip on Toronto’s dining scene, recruiting Cameron to help them do it was an easy choice.

“He’s a brilliant chef,” Harji says. “He’s very cerebral. He’s probably the only chef I know who can do multiple genres of food. He just figures it out on his own, and there’s not many people who can do that.”

These days, Cameron doesn’t get out much.

Following breakfast, he grabs some pans, a box of tomatoes and other cooking supplies and stuffs them into his BMW 335i. The miscellany needs to go to Patria. Cameron jumps into his car and heads into downtown traffic. In the vehicle, he fields a hands-free phone call. Harji and Khabouth want to open a new steak house in Yorkville, and Cameron needs to find suppliers. He arranges an appointment with a potential candidate, then  rolls up to Patria to drop of the gear.

“I have to open a bakery,” Cameron says, as if it’s just another tick on his checklist.

Next stop is the Icon Legacy headquarters, located in a sizable industrial building on Niagara Street. There are logistical issues to be dealt with. Cameron steps into his office, where his personal assistant and “left hand,” Teresa Doell, greets him. There are cookbooks everywhere (Noma, The Book of Tapas, Happy in the Kitchen), and the walls are coated in six dry-erase boards packed with lists and reminders. The quantity of upcoming off-site events is staggering: there’s the Taste of Toronto festival; PintxosTO; a Pan Am event; two collaborative dinners at Momofuku Shōtō; an appearance on Cityline and more.

The chef needs to know if he has any immediate obligations he’s forgetting about.

“What’s tomorrow?” he asks his assistant.

He starts dealing with emails and making phone calls. Slowly, items are crossed off his list. Storys has just hired a new chef, and he needs to get files transferred onto the new employee’s computer, so he passes that duty to the assistant. Delegation, he says, is not a choice. He picks up the phone.

“Has anyone ordered filters for the combi-oven at Weslodge?” he says into the receiver. “Can you get me a water filter as well?”

Behind him, on one of the dry-erase boards, there is a heading labelled “bakery.”

“I have to open a bakery,” Cameron says, as if it’s just another tick on his checklist. Currently, fresh-baked bread for all the restaurants is made in the wood-fired oven at Patria, but due to Icon Legacy’s rapid growth, this is no longer sufficient. “It’s been an issue finding the space,” he says. “Otherwise, it’s a pretty easy setup.”

Normally, Cameron would spend the rest of the day bouncing between his restaurants, expediting and ensuring consistency. Sometimes, if he has the time, he’ll even step into a kitchen to cook. This is what he does to relax. But tonight, he’s wrapping up the Streets of Spain festival, which means giving away free paella and churros in a King West alleyway.

Yes, he is feeling a bit stretched out these days — his free time, he says, is reserved for laundry —  but for now, he doesn’t mind it.

“You should probably eat before you go to the event,” his assistant suggests.