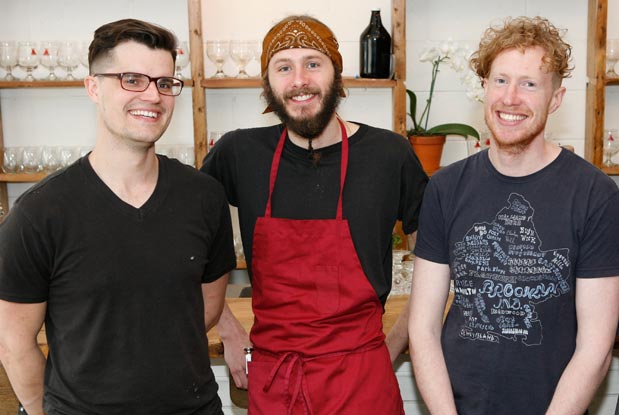 Guy Rawlings, formerly of the buzzy Brockton General on Dundas West and now the menu consultant for the newly opened brew-pub Bellwoods Brewery on Ossington, is one of the city’s most celebrated young chefs. And now he says he has found a new interest: beer. Or, at least, good beer.

“I’m big time enjoying learning about beer,” he says, “I drank s*** beer all my life, and people made fun of me. I hadn’t known much about the process, the ingredients or different flavours, and this is opening my eyes hugely.”

Opened last month by former Amsterdam Brewery brewers Mike Clark and Luke Pestl, Bellwoods is a space for lovers of craft beer to enjoy a drink that, for the most part, is brewed in-house.

To accompany the beer, Rawlings has crafted a menu that includes a sampling of the kind of simple-yet-standout dishes he’s become known for: lamb tongue on a skewer; whipped trout with cauliflower, celery and hop shoots; and crispy beef and pork with pea shoots, rehydrated peanuts and mustard sauce.

By bringing on board a chef of Rawlings’ creativity and stature, Pestl says he knew the food would equal the beer and complement the flavourings.

Friends since childhood, Pestl says that, aside from having an easy rapport with Rawlings, he also knew that the chef felt about food the way he and Clark felt about beer. As for Rawlings, he says that when Pestl and Clark gave him the book The Brewmaster’s Table as a gift at the beginning of this venture, he was hooked. He says he might eventually try to brew a batch of his own to pair with food.

Rawlings is also fond of the space Bellwoods Brewery inhabits. The micropub was designed to be minimalistic, but it has a cozy appeal with a long wooden bar and rustic tables. The brewery is the focal point of the space, with big, silver tanks reaching up to high ceilings.

“I like the feel — the physicality of it,” says Rawlings. “For me, few restaurants in Toronto have the physical dimensions of it — that kind of industrial feel — a working space where you can see work is being done and it’s not hidden.”

The kitchen is crammed into a tiny space, but that doesn’t phase the chef who says he’s used to making the most of limited resources. At Brockton General, Rawlings was by himself in the kitchen with just a dishwasher for company, so he learned how to keep his food creations simple. “It was a good challenge in terms of cooking,” he says. “The kitchen there was insanely minimal, and I would cook by myself for 45 people — so it taught me how to simplify and make things tasty. We had only three frying pans in the kitchen.” Rawlings says he has always been attracted to working at places like Bellwoods Brewery and Brockton General because he is able to have more creative control over his menu rather than follow someone else’s vision.

“For me, the best part is being creative, and I have always been able to do that — in every kitchen I’ve had the opportunity to create,” Rawlings says. “It’s nice when you’re able to explore your mind and work that muscle and, overall, I’ve always strived to work at places that have allowed me to do that.”

Born in Buckinghamshire, England, Rawlings moved to Toronto with his parents and older brother when he was three years old. Growing up in North York, he started working in restaurants as a dishwasher at the age of 17 and never left the industry.

A friend of his hooked him up with a cooking job after high school, and from there he was accepted into a two-year culinary program at George Brown College, which he left after one year.

“I demoted myself to graduate after a year,” he says about the experience. I found working a better way to learn than school.”

After about a year, Rawlings returned to Toronto where he helped open Cowbell on Queen Street West as its sous chef and, later, as chef de cuisine. But, feeling restless and wanting to continue moving forward, he relocated to New York City.

He worked for free at the molecular gastronomy hot spot wd~50, under the pastry chef for a short stint. Shortly afterwards, he moved on to Beijing. He says he was lucky to find work there and to make connections even though he didn’t speak the language, and the experience made him realize how underrepresented Chinese food is in Toronto.

Rawlings plans to continue exploring the different food cultures of the world in June when he plans to head back to England, then Copenhagen and Berlin.

As for opening a restaurant of his own, Rawlings is not so sure.

“I don’t know, in the end, that it will give me what I want,” he says. “I want to have a kitchen properly set up with the right resources… I used to think I could only do that in a restaurant format, but I would like to explore different avenues.”

Rawlings has experimented with opening an invite-only restaurant, Apt. 303, from his home, in an attempt to get away from a traditional venue.

“While I don’t necessarily want to work in a restaurant, I want to create food,” he says.

And that should make Toronto foodies look forward to Rawlings’ return.