Chef Profile: Anthony Rose, the man behind Rose and Sons and the newly opened Big Crow - Streets Of Toronto
Skip to content 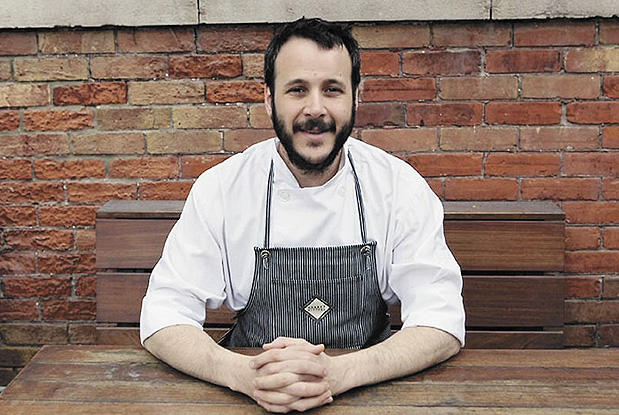 Although he’s become known for upscale versions of the sort of simple fare that’s currently enjoying a moment, Anthony Rose, of Rose and Sons, is hesitant to slap any labels on his dishes. The 40-year-old chef-cum-restaurateur confesses that he has simply always preferred serving the food that he most enjoys making. If people find his food comforting, so be it — just don’t call it comfort food.

“It’s such a bullshit term,” he says. “For me, it’s just the only way I know how to cook. I’ll go out to eat molecular food, but I just don’t know how to do it, and I don’t really want to learn.”

Instead, Rose has taken the upscale approach to classic food that helped him make a name for himself for six years as the executive chef at The Drake Hotel. His first restaurant, Rose and Sons, which opened last year, has already made waves — both good and bad.

“People either love us or hate us,” he admits of his often-heavy, greasy spoon–inspired fare. Indeed, reviews either skew toward fawning praise of Rose’s cardiovascular-health-be-damned menu or toward lamenting his laid-back approach as the death of sophisticated dining culture as we know it.

For his part, Rose doesn’t seem to care too much what the critics have to say (the lineups of customers hungry for items like his $16 fried chicken club sandwich probably help), and instead he’s characteristically nonchalant about what makes his approach to dining a success.

“We’re cooking stuff that any of these people can cook at home,” he says. “But we put a little more love into it, cook it a little slower, make it just a little bit juicier, a little fatter.” Rose’s fried rice comes with a generous portion of pork belly, and other dishes are made fatter with Rose and Sons’ own Dr. Pepper–marinated bacon.

“Dr. Pepper and love are two of the best ingredients,” he quips.

Despite his modesty, however, Rose’s (and chef Chris Sanderson’s) approach to the fare wasn’t something they came up with overnight. Prior to his six years at The Drake, Rose attended San Francisco’s California Culinary Academy before stints cooking in Boston and New York — the latter under renowned chef Jean-Georges Vongerichten. Still, he’s just getting started.

Earlier this week he debuted his second restaurant, Big Crow, which opened up just behind his first venue in a space initially planned as a Rose and Sons’ patio.

The focus is on “backyard barbecue,” a.k.a. quick-grilled meats — although there is some slow-cooked and smoked barbecue, too.

After that? Well, Rose hopes to open a third restaurant, a promise he made when leaving his Drake gig.

“I think when I said I was doing three, it was both the smartest and stupidest thing I’ve ever said,” he says, laughing. “People hold you to that!”

Stress aside, Rose seems to be enjoying the ride.

“This is a new chapter of my life,” he says. “The hardest day in a kitchen, when shit is hitting the fan, doesn’t even come close to being an owner.”

And whereas he’s quick to dismiss labels, Rose would be happy if the future held a permanent place for him and the familiar food for which he’s come to be known.

“I think that it makes people happy to know what they’re getting themselves into,” he notes. “Places like Allen’s — I could only ever wish to have a restaurant like that.”

Meanwhile, Rose seems to have found a loyal following by virtue of his restaurant’s old-school, rustic charms and food made with love — regardless of whether or not he’s willing to let you call it comfort food.