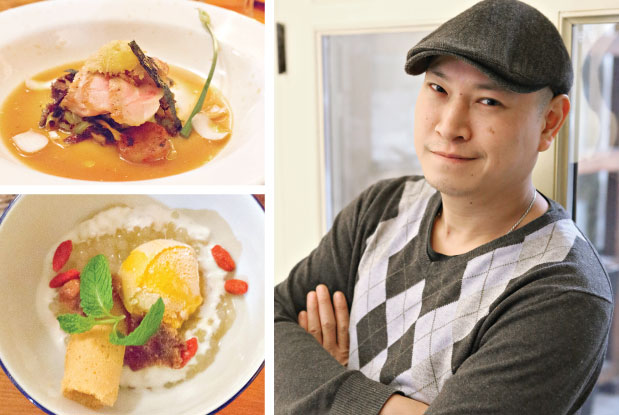 When chef Nick Liu left Niagara Street Café shortly before it closed in 2012, the departure was bittersweet. Over the course of four years, Liu and the restaurant’s owner, front-of-house maestro Anton Potvin, had made magic together. They had become close friends and developed an unusually strong workplace synergy.

But Liu was on course to open an exciting new restaurant. He envisioned it as an outlet for the style of cooking he had been developing for years: Eastern flavours cooked with local ingredients and classic French techniques. It was to be an Asian-inspired brasserie called GwaiLo.

Liu did everything right, promoting the brand through social media and a series of pop-up dinners. Still, despite his drive and despite his enviable pedigree — nine years at the legendary Scaramouche; one-and-a-half years at Splendido; stagiaires at some of the best restaurants in the world, including the Fat Duck and St. John — the restaurant almost never came to be.

For two difficult years, Liu scoured the city for potential locations. During that time, he was mostly unemployed. He got caught up in fierce bidding wars, and he lost them. As one location after another fell through, his business partner at the time jumped ship. Liu’s marriage fell apart, and he moved back home with his parents. He thought about giving up and working for someone else, but he didn’t think about it for long. “I’m stubborn,” the 38-year-old chef says. “I’m not going to let anyone tell me I can’t do something.”

With the increased buying power, they scored a prime location in Little Italy where Grace once stood. GwaiLo is one of the most anticipated restaurant openings of the year, not only because of Liu’s resumé and not only because it represents the reunion of the Niagara Street Café dream team, but also because Liu’s palate is so unusual. He’s spent his entire life honing it.

Liu was born in Scarborough and raised in Markham. His father, ethnically Chinese and Indian, was born in Kolkata; his mother, of Hakka descent, was born in South Africa. This made for interesting meals growing up. Family dinners were of the non-meat-and-potato variety: crab with ginger and egg sauce; congee with fried bread; homemade wontons; lamb and lentil curry.

He recalls hanging out with his grandparents as a child, making dumplings by hand with them. His grandfather, clearly ingenious, had constructed his own noodle-making machine that was powered by an old lawnmower engine. These were Liu’s surroundings as a child.

“Growing up I kind of took it for granted because you don’t realize that not everyone eats that way,” he says.

Some chefs say they always knew they wanted to cook, but Liu is not one of those chefs. A self-professed “f**k-up” in high school, his interest in the world of chefdom was sparked one day when he saw Brad Long — then chef at the CN Tower’s 360 — on television. Liu got in touch with the chef to see if he could work at the restaurant for a day as part of a school project. Long took him on, and that led to a summer job prepping pastries and appetizers.

Next came culinary school at George Brown, followed by a stint at Scaramouche that ended up becoming nearly a decade long. There, he worked every station, developing the classic French foundation upon which his cooking is based (this European training is partially what GwaiLo — which is Cantonese slang for “foreigner” — refers to).

“I always knew he was going to be good,” says Keith Froggett, chef at Scaramouche. “His dedication, his motivation, all of those clichés. He’s special. He’s a good all-round cook, and that takes time. He’s paid his dues.”

The respect is mutual. Liu cites Froggett as his primary mentor,  having been influenced by the storied chef both professionally and personally.

“Scaramouche is still one of the best restaurants I’ve ever worked in,” Liu says. “Keith taught me how to be a better human and how to deal with death, disappointment and success.”

Liu took some time to travel the world, and he worked at top-tier restaurants in every country he visited, including Italy, England and Australia. Sydney, he says, was life changing for him. That’s where he spent five months working at Longrain, a Southeast Asian restaurant. Liu  had hever seen anything like it. Fresh coconut milk was brought in every day, curry paste was pounded by hand and chefs used fish sauce instead of salt.

“It got me to rethink Asian food,” he says. “I started concentrating on developing a new style.”

He returned to Toronto with a new bag of tricks, and eventually word of his cooking reached Anton Potvin, who needed a new chef for Niagara Street Café. As an audition, he invited Liu to prepare two carte blanche dinners. The first was Liu’s interpretation of what he felt Niagara Street Café currently represented, and the second was restriction-free. Liu got the job.

“He had a skill set and a depth of knowledge that was really impressive,” Potvin says, “and he had a natural ability for flavours that is impossible to teach.”

It was his first gig as a proper chef, and at first he stuck with the French status quo. But slowly his personal style came out, and by the end of his tenure, nearly the entire menu had a distinct Asian influence.

During this time, Liu developed menu items that are now the bedrock of the GwaiLo ideal: General Tso’s sweetbreads tossed in a traditional Cantonese sweet-and-sour sauce; Japanese-inspired Bolognese made with soba noodles and beef tataki; whole-fried trout glazed with caramel and soy.

GwaiLo is set to open this summer. The 70-seat space is getting a complete makeover by designer-du-jour Ian Rydberg, who has applied his deft touch to some of Toronto’s hottest new restaurants, including Home of the Brave, La Carnita and Valdez. As an added bonus, GwaiLo will also offer dim sum for Sunday brunch.

For Liu, reuniting with Potvin to open the place of his dreams is a better circumstance than he’d ever hoped for.

“There’s nobody else I’d rather open a restaurant with,” Liu says.