Catering to the inn crowd: The Drake Hotel’s Jeff Stober - Streets Of Toronto
Skip to content 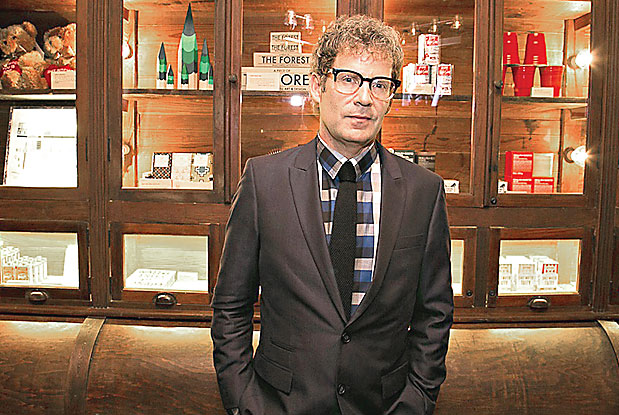 Jeff Stober is a fast talker. One of those guys with “vision.” And you’d be hard-pressed to find many folks in this town who have had more of an impact on the cultural fabric of Toronto than this Forest Hill resident, who just celebrated the 10th anniversary of his landmark undertaking, the Drake Hotel.

Not one to sit on his hands and watch the world go by, Stober is firmly in expansion mode.

The energetic hotelier has expanded the Drake Hotel brand to include Drake General Store, a successful retail operation, as well as Drake 150, a bit of Queen West style and culture plunked down in the middle of Toronto’s financial district. In the next month or two, Stober will launch his next project, Drake Devonshire Inn, located in Prince Edward County. But he’s just getting started.

“For me, we are an experiential brand. We’re all about what people see, what people feel, taste, hear, you know,” says Stober.

“We lump all that together. I’m kind of the conductor, but we’re all curators in our company. We’re a Queen West brand, right. And it’s really important that we export the sensibility that we’ve grown up with on Queen West.”

To that end, Drake Devonshire, cantilevered right out over Lake Ontario, will feature very “Drake” accoutrements in the dining room, the music venue, the art collection and the general store. The Drake by the lake will include 11 rooms done up in a “rough-lux design palette,” with decks, outdoor bar, restaurant and private dining, and will feature “P.E.C. farm and lake-to-table dining.”

“We are going to reinterpret the classic Canadian weekend experience,” he explains.

“We all love a road trip, so we’re going to reinvent the road trip. People are going to get in their cars and drive to Prince Edward County: there will be dinner, art trails — it’s right on the lake — and they are going to see a collection of artists, designers, architects.”

With the increased concentration on technology in our personal lives, Stober theorizes about how people carefully curate their own personal brands through social media. As a result, people put an increased value on their free time and need to let their proverbial hair down.

“For the few hours that we actually go out to socialize, it’s a throwback to nostalgia, to anything that reminds us we’re human,” he says. “That’s the movement the last couple years: reclaimed, recycled, refurbished, learning how to cook, how to sew, people into environmental issues, which they should be. It’s a movement toward reminding us that we’re human. Everything we do at Drake is really about being human and creating very social environments.

In addition to Devonshire, Stober also let slip that he is close to finalizing a deal with the Bay to open Drake General Store outlets in the department stores nationwide. Oh, and there could be an announcement concerning a second Drake Hotel in the coming weeks. It’s close.

“Nothing stands still. I’m not a scientist, but you’re either moving forward or backwards,” he says.

“I only know how to move things forward. For me, it’s really fun to create opportunities for our employees and for the artists we collaborate with and for the many collaborators we work with — artisans, purveyors, suppliers — the people we touch. It wasn’t going to stand still. If it’s not going to grow, it’s not for me, fundamentally.”

Before the Drake Hotel, the Montreal native was a student at the University of Western Ontario in the administrative and commercial studies program. He couldn’t wait to leave. He had work to do.

He set up shop in Toronto 35 years ago and founded a successful high-tech company that he sold before opening the Drake Hotel. In the years between the two projects, he travelled for more than a year in India and Nepal among other far-flung places. But, being the classic vagabond wasn’t in the cards for the far-too-eager Stober.

“The difference between travelling indefinitely, which is what that trip was, is there is no platform and no agenda, versus carving out a few weeks here or there where you can reference that platform,” he says. “I didn’t see myself travelling forever from outpost to outpost without a platform to speak of, so I came back.”

Stober parlayed his love of art and the world’s great hotels into something new and completely different for Toronto: a smattering of New York City’s Chelsea Hotel with a dash of the fine small hotels he’d visited and grown to love in the south of France. Stober speaks with relish of the opportunity to create a boutique hotel with a direct relationship to the artistic community.

“There are so many examples of great artists who had relationships with hotels,” he says. “Sid Vicious, Leonard Cohen, Dylan, they all co-operated with hotels in one fashion or another. It’s this amazing history.”

If Stober were going to do a hotel, he’d do it his way. “I wanted to combine my love of interior design, food cocktails, artists and hotels,” he says. “I tried to create a model that brought all my interests together.”

When plans for the Drake Hotel were revealed, the city was in transition. New city policies for increased density in the city’s core were moving forward, and the condo building boom that continues to this day began in earnest, and Queen West was far from immune.

The Drake was perceived, by some, as the thin edge of the gentrification wedge that would drive artists to the hills and destroy all that was good and holy along Toronto’s most sacred strip. And, sure there was some of that. But, over the past decade, Stober and his Drake earned their place in cultural touchstones of note in the city.

“It was both celebrated and misunderstood at the beginning,” Stober explains. “But 10 years later, it has come of age and spoken about as an institution. You have to have patience, vision and stand by your core beliefs. Eventually people will see the authenticity of what you do.

“You know, Toronto has been so good to me. And, it’s been a great period, 1980 to 2015, the reimagination of Toronto. Like, really, what an opportunity to be part of a city that is big enough and yet small enough to have an impact, make a difference and really carve out something.”