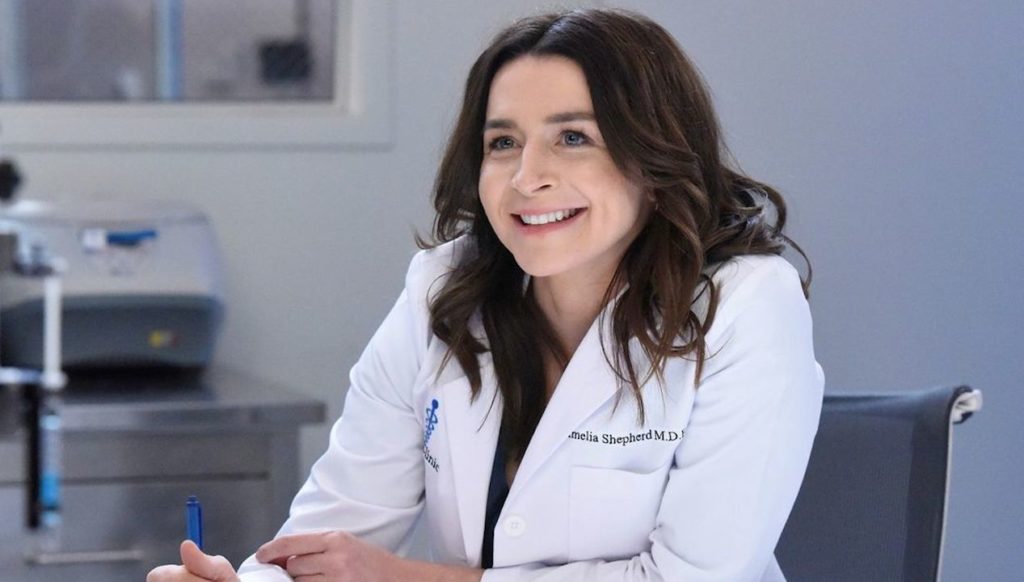 When Grey’s Anatomy star Caterina Scorsone picks up the phone, the first thing she says is: “You’re calling from Toronto? That’s nice even to know!”

It’s clear from the start that Scorsone is missing her home — even though she’s likely stopped calling Toronto that years ago and has been living in Los Angeles for even longer. “I have very fond feelings about Toronto,” she says.

Most of her family still lives here, though she says she hasn’t been back to visit them since the pandemic hit. Scorsone grew up all over Toronto, in the Annex and then Queen West, balancing a work schedule, which started at the age of eight on CBC’s Mr. Dressup, with school. When reflecting on her time in Toronto, she says she remembers many things — Trinity Bellwoods Park, strolling Trinity College, hanging on Queen and College streets — but she says what she misses most about the city are the “social conversations.”

“While you’re living there, you kind of take it for granted, but when you leave, you realize what a beautiful job Canadians, and specifically Torontonians, have done to foster diversity in their community,” she shares.

Scorsone says this has been especially apparent as someone with a child who has a disability. “I think Toronto is doing a good job of trying to hold itself accountable when it comes to awareness of disability and conversations around disability,” she says, “though obviously there’s still work to be done in Toronto as well.”

These social conversations are something she’s proud of being able to channel through her role as Amelia Shepherd. When viewers of Grey’s Anatomy first met Toronto’s own Caterina Scorsone, she played opposite Patrick Dempsey as his character Derek Shepherd’s unpredictable and unmistakably brilliant little sister. But upon Amelia’s return as a series regular in season 11, she had already grown immeasurably from her first appearance. That growth is something Scorsone admires about her character, especially this season.

In season 18, Amelia strikes up a relationship with Kai, a neuroscientist at a partnering hospital who is the show’s first non-binary character. Scorsone describes this as marking Amelia’s first queer relationship.


“It’s an amazing unfolding for Amelia on the screen,” Scorsone says. “I think one of the things people don’t realize about Amelia is that she was originally conceived as a queer character.” When Amelia’s character first appeared on Grey’s spinoff Private Practice, Scorsone says a storyline where Amelia was dating a woman with whom she was doing a fellowship was cut for time.

Scorsone says that, for Amelia, whose love life has been “fraught” in the past, this love story with Kai has been especially beautiful.

“The writers allow it to unfold so organically. It’s a complex story and also super romantic and hot. This connection with Kai has offered her a perspective on herself and a mirror of herself that no one else has offered her,” she says.

Amelia has previously been in relationships on the show with characters Owen Hunt (Kevin McKidd) and Atticus “Link” Lincoln (Chris Carmack) which have been loved and reviled in turn by fans. Scorsone suggests that Amelia’s new relationship with Kai reflects her character growth as a whole.

The Grey’s Anatomy finale is set to air on May 26 from 8 to 10 p.m., and Scorsone isn’t sharing any spoilers. But, she says, “One of the things I would hope for the next year is that this all coincides with her coming into her authority as a woman, as a surgeon and as an expert in her field. I hope we’ll see the full development of her maturation as a human being, stepping into fully realized motherhood and the role as a surgeon, mentor and teacher.”

Motherhood is a new journey for Amelia, who gives birth to her son in the season 16 finale. But for Scorsone, who is a mother to three daughters, Eliza, Pippa and Lucky, stepping into the role onscreen was old hat.


“One of the nice things was that, when we were doing scenes and Amelia was out of the hospital and with her son, it felt very natural to sink into that blissful fatigue,” she says.

Being part of a big family is something Scorsone shares with her character. Although Amelia is the youngest of five, Scorsone is the middle of five with three sisters and a brother.

But she says that her relationships with her real-life siblings more closely resemble that of her character’s chosen family, sister-in-law Meredith Shepherd (Ellen Pompeo) and Meredith’s half-sister Maggie Pierce (Kelly McCreary).

“I’m very tight with all of my sisters, and we have a super supportive network of womanhood in my family. Everybody shows up for each other in really beautiful ways, whereas I think the Shepherd family has a little bit more toxicity going on,” Scorsone says.

Amelia, Meredith and Maggie have created a chosen family unit on Grey’s Anatomy, taking care of each other’s children and living in the same house together. As a character who has dealt with addiction, Scorsone says this chosen family is an important part of Amelia’s sobriety journey, a journey that she has found especially “fulfilling” to portray.

“My father worked in social services his whole life and he ran a homeless shelter in Toronto called the Good Neighbours’ Club [now called Haven] for 10 years,” Scorsone says. “My whole life, I’ve been exposed to the complexity of homelessness and mental health and addiction and how structural problems in municipalities and countries contribute to them. I’ve tried to approach Amelia with support and curiosity rather than stigmatization and shame.”

Scorsone says Amelia’s overlapping family unit has “very much been her experience” as a parent. “That dynamic of being in this bustling household with a bunch of kids and supporting each other and showing up to do child care, weaving community with the women in your life so you can pull off the magic of pursuing career goals, that is something that’s a priority for me,” she says.

She makes a point of talking about this dynamic, especially with other women.

“I want to encourage other women to reach out and find the supportive people in their lives that can break them out of the isolation of the nuclear family idea and product of capitalism that is the modern family in North America,” she shares.

“All of the characters on Grey’s who have children, the time management that we magically are able to pull off in this hospital is unreal,” she quips. “Being able to fly back and forth to Minnesota and take part in groundbreaking research in surgeries on Parkinson’s disease would probably be slightly more difficult in the real world. But this is movie magic!”