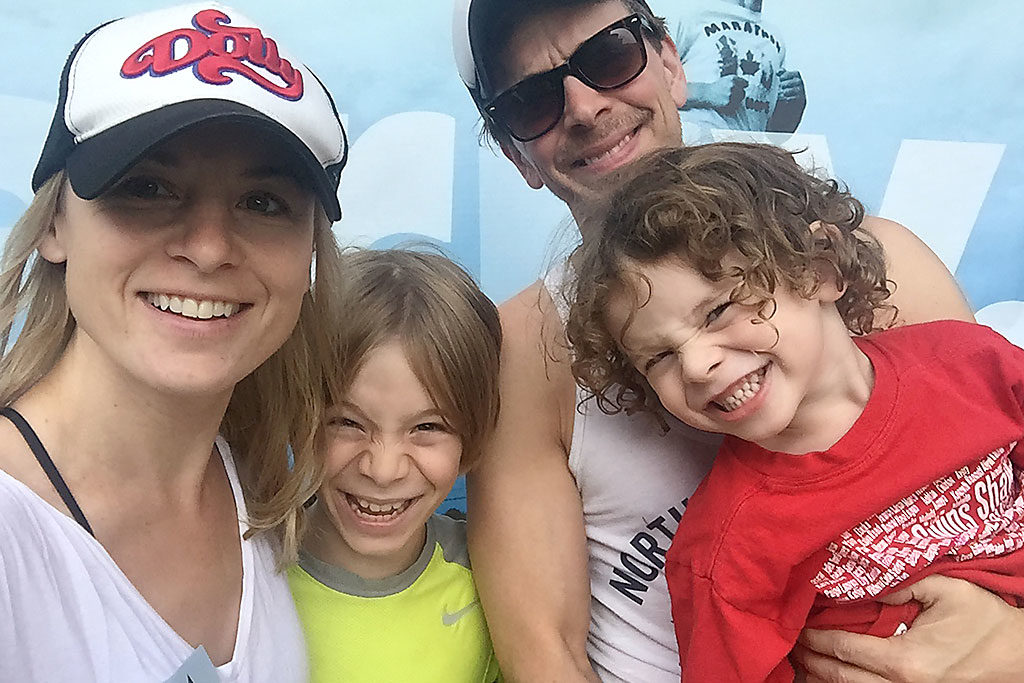 Actors Joanne Boland, of CTV’s Carter, and Dylan Trowbridge of YouTube Premium’s Impulse, met in a church 18 years ago. This is how the pair’s whirlwind romance kicked off.

How they met
Dylan: On Jan. 19, 2000, I got a phone call. Some friends of mine were doing a musical at the Berkeley Church, and they needed someone to tend bar. The venue was packed, and I was a novice bartender, but I was slinging drinks and cracking jokes, and things seemed to be going all right. Then a beautiful stranger approached the bar. I can’t remember what she ordered, but I was gobsmacked and I screwed up her change — very badly. There was no justifiable mathematical logic to my error. She politely walked away. I collected myself, did some quick math and realized my mistake. I was embarrassed but excited to have a reason to go talk to her. I was self-deprecating and apologetic. She was gracious and amused. Same night, hours later we ran into each other at the Green Room in the Annex. And then, very late on Valentine’s Day, last call at the Green Room (again), we saw each other. Then either I asked her out, or she asked me out. The debate continues.…

The first date
Dylan: March 9, 2000. Gorgeous night. Drinks at the Green Room. Saw a play. Late dinner at Insomnia. As we were walking east on Bloor Street, an eccentric, older gentleman zeroed in on us and slowly approached. He seemed to be assessing us. Then a huge smile overcame him, and he declared “You two are going to get married!” At the end of the night we kissed at Bathurst station.

The courtship
Joanne: Our courtship was filled with awesome road trips. We used to put destinations in a hat and pick one, and that would determine where we ended up, though it didn’t always work out that way. Our first car we got together was an old VW, and our goal was to drive to Boston but we hit a hideous snowstorm. We detoured to Barneveld, N.Y., and ended up in a motel and got a pizza from the restaurant next door. We couldn’t figure out how the heat worked in the room and so we bundled up and watched silly movies on TV. It was heaven.

The proposal
Joanne: I asked him to marry me three months after our first date. That was 18 years ago.

The wedding
Dylan: We were married on Sept. 1, 2003, at Navy Hall in Niagara-on-the-Lake. Joanne was shooting a series that summer, and I was working at the Shaw Festival, so I offered to plan the whole thing. I had never been to a wedding before ours, so I really had no idea what I was doing. The ceremony was short, sweet and irreverent. The reverend had hip-hop “walk up” music, and Joanne walked down the aisle to the theme from Amelie. We had a rockabilly band, a massive barbecue, and there was a Labour Day fireworks display across the river. The Shaw Festival company and Joanne’s show pooled together a honeymoon fund for us. We went to Negril, Jamaica, where we went scuba diving, cliff jumping and water-skiing.

Secret to success
Joanne: Sunday date night at home. We have roti and a bottle of wine and watch a show. We started it in 2009, and even when we lived in Stratford, we would buy a couple of rotis when we were in Toronto and then freeze them — game changer.

Carter premieres on CTV on July 24, and Impulse is currently streaming on YouTube Premium.