Is now the time for an overdue park behind Capitol Theatre? - Streets Of Toronto
Skip to content 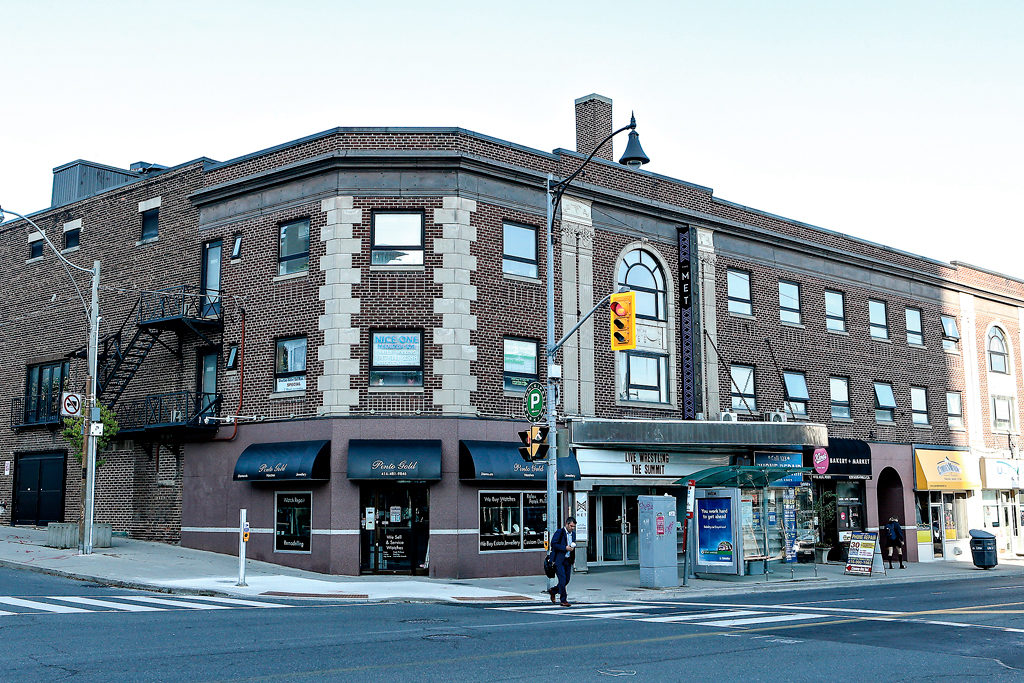 After years of controversy, including a failed attempt to purchase adjacent city-owned properties, a scaled-down development of the site that includes the Capitol Theatre at Yonge Street and Castlefield Avenue is about to be put before the public.

However, a local residents’ group is concerned about the development’s impact on a park that has been proposed for the midtown neighbourhood, as well as the demolition of part of Toronto’s history.

The Capitol Theatre, located at 2492 Yonge St., opened in 1918 and featured vaudeville shows and silent films. It closed as a movie theatre in 1998.

After a $2 million renovation, it reopened as a special event venue called the Capitol Event Theatre.

In 2015, the theatre and adjacent properties were purchased by Madison Homes, a Toronto-based developer, for $19,938,163.

On June 29, 2018, an application was submitted to the City of Toronto for a 21-storey mixed-use building on the site as well as on adjacent city-owned properties.

The city-owned properties, located at 20 Castlefield Ave. and 565 Duplex Ave., are above ground parking lots operated by the Toronto Parking Authority (TPA).

The TPA had executed an agreement to sell the property to the developer in December 2016 but needed Toronto City Council approval, as the proposed transaction was outside the approval authority delegated to city staff, which is capped at $10 million.

In June 2018, city council gave notice to the developer that the city did not give its approval of the sale.

According to councillor Mike Colle, the city went to court to ensure the land remained in public hands.

The applicant has since revised the proposal, altering the height of the building to 14 storeys and decreasing the size of the lot area. The latest proposal includes 172 residential units ranging from one to three bedrooms.

“The development is no longer going to be on a Green P parking lot because [in] the previous application they were going to go from Yonge all the way to Duplex, so that’s no longer the case,” said Colle.

“So the parking lot is now in public hands again, and my goal is that, beyond this application, I want to turn the Green P into a public park.”

The new proposal includes a proposed land exchange with the city with some current TPA land on Castlefield Avenue acquired by the applicant to be incorporated into the development in exchange for an identical area of land on Duplex Avenue.

A move Colle said will have minimal impact to a possible future park at the site.

“It’s very miniscule, it’s just a technical sort of exchange,” said Colle. “It’s a very small strip of a couple metres. The main thing is the parking lot is hands-off for this proposal.”

Maureen Kapral, of the Lytton Park Residents’ Organization, said that the area has been identified as parkland deficient.

She added that the Midtown in Focus Parks and Public Realm Plan had identified the TPA lot at 20 Castlefield Ave. as having the potential to contribute to the parks and open space in midtown.

She said that, although the proposed land swap wouldn’t diminish the size of any future park at the site, a 14-storey building is much too high for the area, as the height of the building would negatively impact any future park.

“That is land that the city has that could be used as a park, and if there is a 14-storey building next to it, the shadow effects from that — it will be significantly impacted by the shadowing for a good part of the day,” said Kapral, who added that a future park would be shadowed by the building until the afternoon in the spring, summer and fall.

Kapral also said the Lytton Park Residents’ Organization initiated getting a heritage designation for the theatre in 2015, and since it has now been identified as a cultural heritage resource, it can’t be torn down without discussion.

“There aren’t a lot of buildings like that left in the city,” said Kapral.

Kapral said the current plan to keep the theatre’s facade conflicts with the city’s heritage policy where retention of facades alone is discouraged.

“And those are proposed to be demolished under the current plans, which haven’t been finalized but are still proposed.”

On Sept. 16, the North York Community Council voted to schedule a public consultation meeting for the proposed development. Colle said it was scheduled for Sept 25.

Colle said the new proposal is much better than the previous one, which he called preposterous due to being built on publicly owned parkland.

“It’s a much better starting point that’s worth looking at, so that’s why we’ll wait to see what the public says and what they think of it,” said Colle.

“This is a significantly different proposal and application, thankfully, than what was there before.”