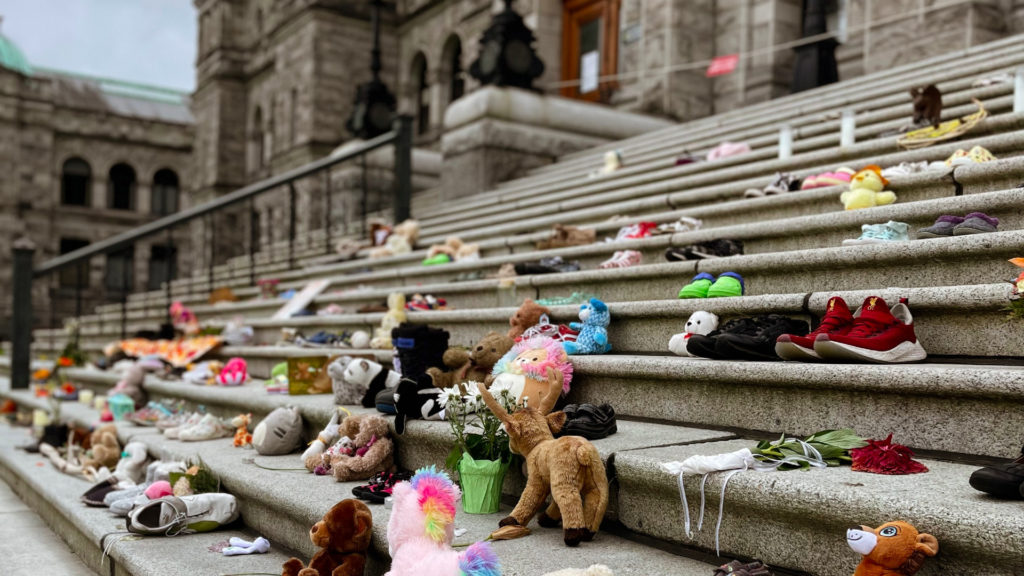 For many, Canada Day is a day of fireworks, cottage visits, drinks with friends and celebration. But over the past month, discoveries of multiple mass burial sites near the locations of former residential schools have been uncovered, marking a growing tally of previously undocumented deaths of Indigenous children in Canada. The discoveries have prompted heartbreak and outrage among Indigenous communities, and have encouraged non-Indigenous Canadians to consider the question, perhaps for the first time – why are we celebrating Canada Day?

The remains of 215 children were discovered at the end of May at the site of the former Kamloops Indian Residential School in B.C. In late June, 751 unmarked graves were discovered at a cemetery near the former Marieval Indian Residential School in Saskatchewan. On June 30, a First Nation in B.C. found 182 unmarked grave sites near the former  St. Eugene’s Mission School. These findings only emphasize what Indigenous people, and reports like the Truth and Reconciliation Commission, have been saying for years: that Canada has a long and ugly history of colonization and cultural genocide against their communities.

But these discoveries have flipped a switch in many regions across the country; Canadians have been calling to “cancel” Canada Day, at least for this year, and instead use the day to reflect on the atrocities committed against Indigenous people at the hands of the Canadian government and mourn the hundreds of lost lives. Victoria, B.C., announced it would be cancelling all of its Canada Day programming, along with multiple regions in New Brunswick and some Yukon communities. The city of Toronto is going forward with Canada Day celebrations as planned, as are federally-run Canada Day events.

For Sam Howden, a Métis student who is one of the organizers behind X University, nothing much is changing in terms of how they approach Canada Day. Howden says they’ve never honoured the holiday. “I don’t really believe in celebrating this type of holiday or this country in and of itself, because of the history of genocide that happened here, dispossession and a whole bunch of other consequences that have followed from things like the residential school system and the Indian Act,” they say.

Howden says that while they are surprised to see the way the Canadian public has rallied so far around this issue, they think the mass numbers of these gravesites are making the difference. “I think that some of those actions are happening because it is the spirit of those children who have led us here,” they say. “Because it’s not as if this has not been happening for a long time, and it’s not as if we didn’t know about it.”

They say it feels like Canadians are finally ready to listen and learn. “And helping us cancel these days like Canada Day, and taking down statues and renaming buildings and renaming streets are part of this important endeavour so that we aren’t faced with the atrocities of genocide in many different spaces,” they explain.

Howden hopes that non-Indigenous Canadians reconsider their decision to celebrate Canada Day, a hope that was echoed by Sol Mamakwa, MPP of Kiiwetinoong in Ontario. He posted a video to his Twitter page on Monday explaining why he would not be celebrating Canada Day, and why he asks others to do the same this year.

This is my message to Canada on Canada Day.

I will not celebrate with picnics and fireworks. I’ll spend the day reflecting, remembering all we have lost and how to move forward.

I ask you to do the same. pic.twitter.com/leXGe2206s

“We cried, and it is so devastating, but also infuriating. We are in mourning, and people are listening and wondering what they could do,” he says. “And I think that rather than celebrating, I’d send a message to ask people to join us in solidarity as a day of reflection, no picnics and parties, no fireworks.”

Mamakwa says it’s important to acknowledge not just Canada’s past but its present. “People say it’s one of the richest countries, a great place to live, but in the backyard of Canada, there are other things that are happening,” he says. “In my riding, I have 16 boil water advisories that are happening right now. I have children growing up with no access to clean water.”

Howden notes that celebrating Canada is celebrating a country that is still responsible for the ongoing effects of genocide, pointing to Missing and Murdered Indigenous Women and Girls and high rates of incarceration among Indigenous populations. “[The effects] are still ongoing in many different facets to this day, and it should be about education and redirecting our energy.”

7 ways to learn about Indigenous culture in Toronto