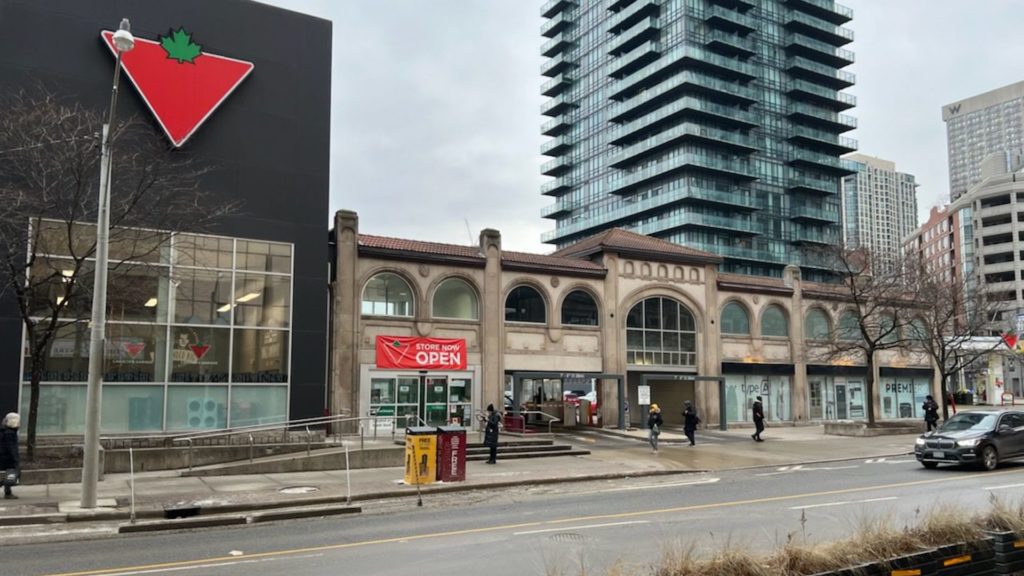 Although nothing is official yet, an insider has posted information online alleging a redevelopment application is underway for the site at 839 Yonge St. currently home to a Canadian Tire store. The large, oddly shaped 2.4-acre parcel of land is on the northeast corner of Yonge and Davenport backing onto railway tracks and the upscale Rosedale neighbourhood.

“I do from time to time, have knowledge of proposals before they become public, but often that is not sharable for business reasons and/or to protect sources. In this case, while my source wishes to remain private, I have permission to share,” read a post on development site Urban Toronto. “That the flagship Canadian Tire on Yonge, just north of Church/Davenport will be redeveloped. Plans are afoot for a multi-tower proposal. I don’t have an exact number.”

The location, and indeed this area of the city, is rich in history.

The site is home to a Canadian Tire store along with the historic Grand Central Market, which was built in 1929. Canadian Tire took over the site in 1937 as the company flagship. The property was listed in the city’s heritage register on Feb. 24, 1986. It is located across the street from another iconic heritage site in the Masonic Temple, built in 1917.

Behind the Canadian Tire is the site of the historic Studio Building at 25 Severn Street used by the Group of Seven, and built by Eden Smith in 1914. It is now a national historic site. Some commenters on the post suggest a redevelopment that incorporates a walkway down to the site and the adjoining parklands would be a positive contribution to the neighbourhood.

There is speculation that the site could handle a three-tower development, and that a new Canadian Tire would be incorporated into the site, but no application has been put forward.

The local city councillor for the area is Mike Layton. He said, he hasn’t seen an application or had any meetings with a potential developer so can’t comment on specifics, but he had a few ideas for what he’d like to see on the site at some point.

“I’ve seen the maps and gone over the local site and we could definitely have better access at the rear to the ravine system, which is very inaccessible right now,” he said.

Layton said the site does have challenges, but it is also close to two subway stations.

One concern is the potential shadowing on the ravine lands should a developer choose to simply propose tall slabs of concrete.

“If a creative developer wants to invest in the city and connect the green space, it might result in a net benefit,” he said.