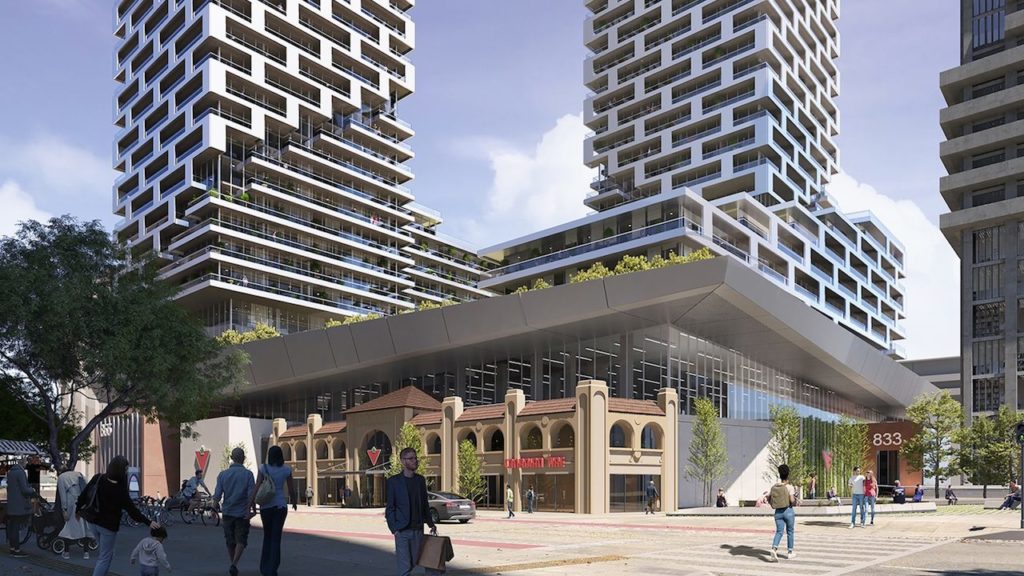 A development proposal has been submitted for the flagship and historic Canadian Tire site at Yonge Street and Davenport Road, which could mean demolishing the store.

Two towers, sitting at 41 and 49 storeys, have been proposed for 835–839 Yonge St. where the Canadian Tire, a Service Ontario office and a parking lot currently reside. Canadian Tire itself is actually proposing to build the condominiums and hopes to reopen the store in the same location at the base of the towers. A total of 950 residential units, ranging from one to three bedrooms, are planned.

Local city councillor Mike Layton said that the site could probably use some density, given its proximity to two subway stations, but he strongly insisted that there is an opportunity to create a connection between Yonge and the Rosedale Valley ravine over existing subway tracks as part of the construction. The Studio Building, once home to members of the Group of Seven and a national historic site, is right behind the Canadian Tire and could possibly be a location a walkway could connect to.

Paul Bedford, a former chief city planner for Toronto and the director of community planning with the Greater Yorkville Residents’ Association, also iterated support for a pedestrian bridge to the ravine and said the community has long desired such a connection. Bedford, who previously took part in a Zoom meeting with the developers to go over the plans, said that their initial reaction was that it would be a big undertaking, but they ultimately didn’t say no to the idea. He pointed out the John Street pedestrian bridge over tracks in the Weston neighbourhood as an example of one that was done right.

Bedford said the developer plans to demolish the Canadian Tire site and rebuild a new one while keeping the store’s historic facade that was built in 1929 as part of the Grand Central Market and was taken over by Canadian Tire in 1937 to be its flagship store. The property was added to the city’s heritage register in 1986.

Bedford said the developers were open to having an interim location for the store during the expected four to five years of construction, which he suggested could be located at the recently vacated Hudson’s Bay store at Bloor Street and Yonge Street.

The gas station at Yonge and Davenport is also included in the plans with a vision for it to be 672 square metres of publicly accessible green space.

Layton did note that the development could create shadows onto Rosedale Valley, which would be unavoidable if anything were to be built on the site. Bedford, for one, is skeptical of the height chosen by the developers, noting that it seemed arbitrary.