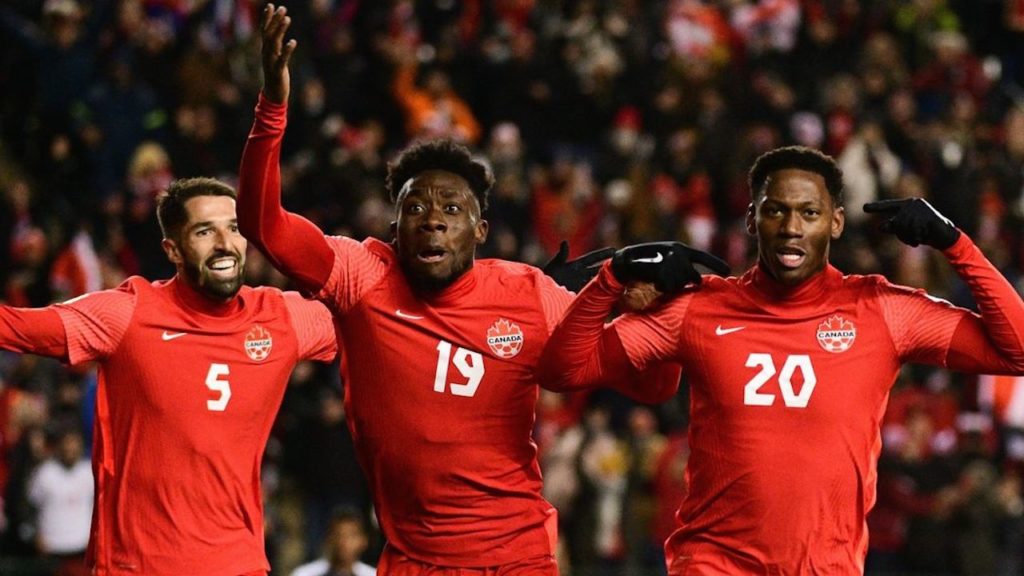 For the first time since 1986, Team Canada Men’s soccer has qualified for the World Cup. After a 4-0 thrashing of Jamaica’s Reggae Boyz in March, the team clinched its spot in the big tournament. Now, the team is set to send 26 players overseas and we cannot wait for the action to start. Here’s what you need to know.

The World Cup is being played in Qatar from Nov. 20 to Dec. 18. The 32-team tournament will take place in eight venues located in five cities around the country.

The opening match will feature Qatar (the host country automatically qualifies for the tournament) and Equador at Al Bayt Stadium in the city of Al Khor.

Catch the Canadian squad’s first match of the group stage on Nov. 23, where they look to upset group favourite Belgium. The reigning world champions are France.

TSN is the official World Cup broadcaster in Canada.

Notable absences from the World Cup begin and end with Italy. It’s the first time the Azzurri, the 2020 European champions, have missed the World Cup since 1958. Toronto’s Little Italy will not be the same this time around.

WE ARE CANADA! 🍁 WE ARE GOING TO QATAR!#CANMNT #ForCanada #WCQ pic.twitter.com/j6hZYGETak

How We Got Here

Canada’s road to World Cup glory was tough from the start. Their region’s qualification format had them playing countries from our rivals in North America, strong sides from Central America, and upcoming squads from The Caribbean. However, their long, arduous path has finally led to a positive conclusion.

Canada tied with Mexico in the final CONCACAF qualifying standings, although they went top of the table due to higher goals for/against average. They recorded eight wins, four draws, and just two losses while scoring 23 goals in 14 games. Canada suffered two heartbreaking 1-0 losses to Costa Rica and Panama.

Our men’s national team has long been an outsider in the international soccer scene. For almost 36 years, the team has defined itself as a perennial afterthought. Heartbreak after heartbreak has finally led to a successful team that combines experience and leadership with a youthful flair.

Davies has been instrumental to his Bayern squad, achieving Bundesliga stardom, winning the German Championship, and winning the FIFA Club World Cup. Bayern Munich and the Canadian World Cup squad were both given a scare when Davies suffered a hamstring injury last week during a match. But the latest news seems to indicate the injury isn’t a serious one, and Davies should be fine to compete at the World Cup. Fingers crossed.

The goal 😱
The reaction 🔥

Did you see Alphonso Davies’ goal last night to put #TeamCanada ahead 2-1 against Panama? 🤯

Reply with your reaction 👀⤵️pic.twitter.com/z3WcnAHyQy

Davies has an incredible backstory having been born to Liberian parents in a refugee camp in the African country of Ghana before the family emigrated to Canada, landing in Edmonton in 2005.

Over in France, David has hit the back of the net nine times in just 13 games while assisting three more. The feisty attacker has already tied his yellow card count from last season at three. Adding a necessary tenacity to the squad. David was born in the United States. His family moved to Haiti when he was still a baby and then emigrated to Ottawa where he grew up and discovered soccer.

Adding to Canada’s youthful growth on the offensive end is Brampton’s Tajon Buchanan. Buchanan has been lighting up the Belgian First Division for Club Brugge. He’s also a dazzling goal scorer who netted one of the four goals in their tournament-clinching match.

TAJON BUCHANAN!#CanMNT up 1-0 over Honduras in this World Cup Qualifying clash as the new Club Brugge star forces an own goal from his opposition defender ⚽️

Stephen Eustaquio has been as good as Toronto chefs at feeding Canada’s attack throughout the tournament. The young midfielder plays for FC Porto in the Portuguese league.

Many of the players on the Canadian side play in the city for Toronto FC with a number growing up in youth soccer leagues around the GTA.

For instance, 27-year-old Richie Laryea was born in Toronto and played high school soccer at Dante Alighieri Academy in North York. He’s played on the senior men’s national team since 2019, which is the same year he signed with Toronto FC.

Other Toronto players to watch out for during the World Cup include Scarborough’s Kamal Miller, a gritty defender. Also look out for Doneil Henry, who cut his proverbial teeth on the Brampton pitches as a youth.

Brampton youth soccer is very well represented on the team, including the aforementioned youthful sensation Buchanan, as well as another Brampton standout in team captain Atiba Hutchinson who anchors the midfield alongside Davies and, at 39, is a long-time veteran of the team.

One of the 416 standouts is Mark-Anthony Kaye, who plays with Toronto FC and was a standout high school player at Lawrence Park Collegiate Institute as well as with Wexford SC in Scarborough.

Canada’s veteran force and experience helped drive them towards qualification. Cyle Larin bagged his 24th goal for Canada in the 4-0 win against Jamaica. This brace helped extend his lead as Canada’s all-time leading scorer.

Much like the first, a great late run, and this time, he finishes with confidence for his 2nd UCL goal, and 3rd of 22/23

He remains in great form, which is great news for the #CanMNTpic.twitter.com/XtX1b4hgnQ

Aiding Eustaquio in the midfield are Junior Hoilett and Jonathan Osorio. While Hoilett has spent most of his career playing across England, Osorio has spent his time in the MLS, tearing it up for our hometown TFC. The combination, paired with Eustaquio, has led a powerful Canadian midfield that has orchestrated many attacking phases.

Canada is ranked 38th in the world. And, the odds of them winning the tournament are not great, tied for 21st best odds. Ghana is the lowest-ranked team to qualify at 61st. But this team of Canadians has definitely taken the world by storm this year, and there is something to be said for riding a wave of momentum in addition to coming into the tournament as serious underdogs. There is no doubt they will do us proud.