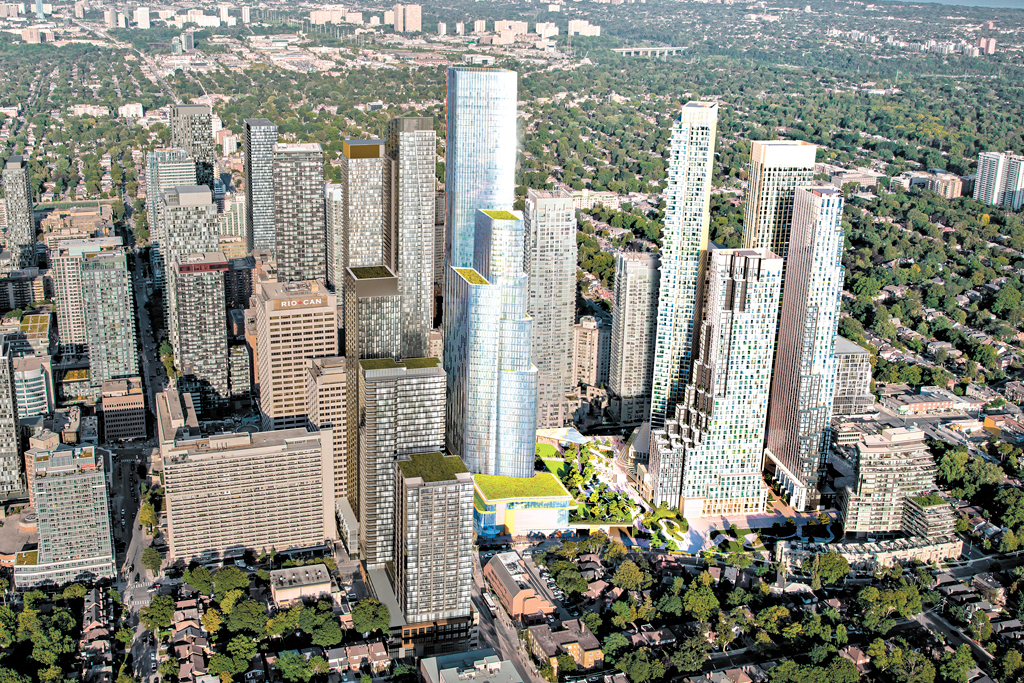 The application to develop the Canada Square site at Yonge and Eglinton is once again scheduled for a late April meeting of the Toronto and East York Community Council, and if city councillor Josh Matlow has his way, it will once again be deferred. The plan, according to him, and according to a large coalition of residents groups stretching across central Toronto, just does not work. And since the land is owned by the city, they intend to do all that they can to get it right.

The developer for the site, Oxford Properties, made a point of consulting with local residents and had released images that seemed to indicate large open spaces and community amenities, but when it came time to put in the actual application, the proof was most decidedly not in the pudding, according to Andy Gort who represents the South Eglinton Ratepayers’ & Residents’ Association.

According to a city of Toronto report, the proposal includes a total of 2,701 residential units (216,162 square metres), 58,763 square metres of office space, 1,941 square metres of retail space along Eglinton Avenue West and Yonge Street, approximately 1,000 square metres of community space and 864 parking spaces located in an underground garage.

What stood out for Gort was the lack of community amenity space, especially in light of the positive overtures by the developer prior to the application.

Development has been at a fever pitch in the midtown Toronto area around Yonge and Eglinton for more than a decade, and it has continued to grow and, according to Coun. Matlow, threatens to outstrip existing infrastructure. Matlow also explained that the Canada Square site is owned by the city and leased by the developer, so there is more control over what goes there than a typical development application.

“I see an opportunity for public service and infrastructure and open space to support our quality of life,” said Matlow. “And when Oxford came in with their application just before Christmas last year, it was tone deaf. It was really just another massive development proposal with really a token gesture of community space and community amenities.”

On the top of Matlow’s wish list for the site, for many years now while the former TTC barns have served as a rather ugly staging area for the Crosstown LRT line, has been a large and central public space for local residents as well as a much-needed school.

“We need a public school in this area because our public schools run at capacity, we need several other types of public services to support our growing community,” said Matlow. “And aside from really a very small space that they put in their plan in the podium of one of the buildings, all the other buildings were just giant residential buildings. And also, not one unit is proposed as being affordable. It does not reflect any of the city or the community’s priorities. There’s just so much work that has to be done on this.”

Gort explained that on a typical development site, the city would ask for 10 per cent of the property for open and park space. But, even with this being an atypical site, the developer did not even reach that target.

“There’s a lot of kind of open space, called privately-owned publicly accessible space. But it’s at various levels because there is a lot of slope to the property and our experience with that is over time that space gets whittled away for shops with patios and things like that,” he said. “And the actual park that is unencumbered, where there’s no garage underneath, it’s less than five per cent of the property. And normally, for a large site, the city always asked for 10 per cent of the property from a private developer at a minimum.”

Gort co-wrote a letter on behalf of the South Eglinton Ratepayers’ & Residents’ Association and a number other associations in the area to the Toronto and East York Community Council asking for a “full-scale comprehensive planning study for the Canada Square site with community representation and consultation throughout.”

And, that request is just what Matlow has in order, as well. Matlow has struck a working group to delve into development on the site to ensure the city gets full value for its land.

“What I’ve done is I have moved a motion that requests a special study area for Canada Square. This is not just another development site, these are public lands and should serve the public interest,” Matlow explains. “And that it’s also right in the heart of one of the most important junctions in our city.”

“Ultimately, the work that we’re going to do together is to propose a vision for what the community wants to see on the Canada Square site that would benefit the quality of life of the community,” said Matlow. “And that Oxford’s proposal needs to address our vision rather than us simply react to theirs.”