Yonge and Eg-normous: Canada Square is the largest development to hit midtown Toronto
Skip to content 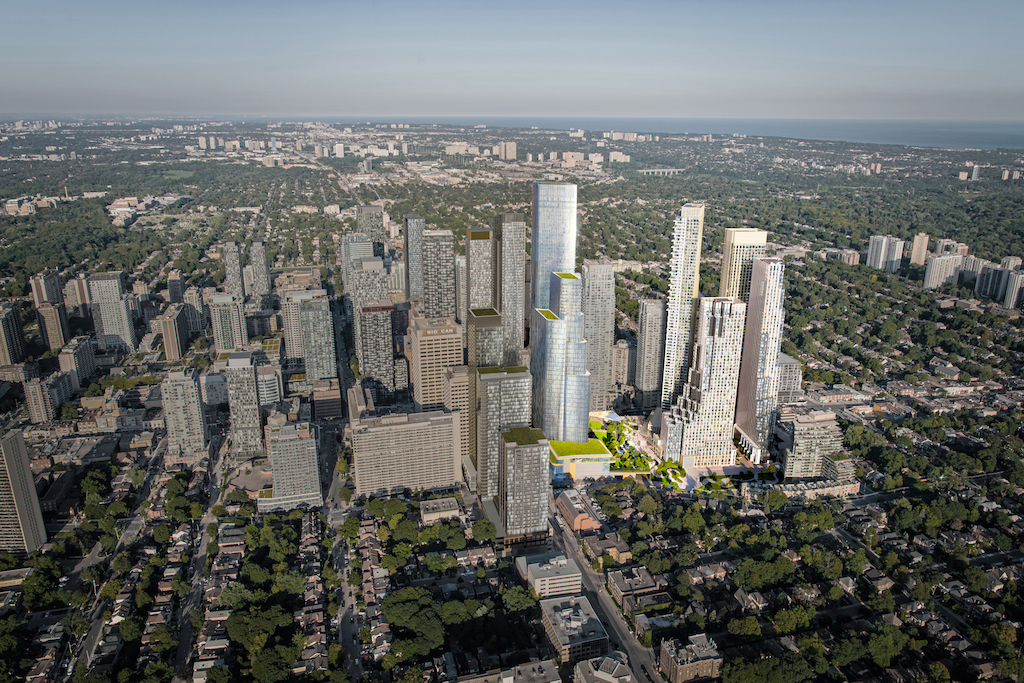 Midtown Toronto has been waiting for years for a central community node to be established with the redevelopment of Canada Square and the TTC bus barns site on Eglinton Avenue and stretching from Duplex Avenue to Yonge Street. It’s a massive 9.2-acre site. It’s ground zero for the entire midtown community, and after an initial community preview and consultation, an official rezoning application has now been submitted by Oxford Properties.

Canada Square is one of the key intersections for the entire city, an important transportation hub and one of the fastest-growing neighbourhoods. And it is one that will take many years to develop, but it is now on the way.

“The rezoning application marks an exciting milestone for the redevelopment plan and builds on the stakeholder engagement process that Oxford initiated back in 2017,” said Andrew O’Neil, vice-president of development at Oxford. “Through continued collaboration with stakeholder groups including the local community, the City of Toronto and transit agencies, we believe our masterplan proposal will deliver significant community benefits and unlock the potential of this technically complex, transit-connected site in the heart of midtown Toronto.”

The Canada Square plan involves three million square feet of mixed-use development space, and five tall buildings ranging upwards of 60 storeys or more, but it is one that also includes plenty of open space, new park space, community connections and more. And it’s one that residents in the area seem to be getting excited about. Partly because it has been years staring at the ugly abandoned site, and partly because it is a plan that puts a good deal of emphasis on the community and on public space. Also proposed are 2,700 residential units and 60,000 square metres of commercial office space.

The mixed-use building is slated to front onto Eglinton and to run from Duplex almost to Yonge, whereas the four towers on the southeast portion of the site are pegged as residential.

“Sometimes we get accused of being against every development, but I think everybody’s quite excited about this,” said Andy Gort, president of the South Eglinton Residents’ and Ratepayers’ Association (SERRA). “You know, there’s nothing very beautiful on the site today. I mean, you can’t even penetrate the site. Even the retail, whatever there is, is tucked inside. The theatre is tucked inside. And it’s a big wall on Yonge Street. So I think everybody’s quite, quite eager to see something develop.”

The official plan for Canada Square has now been submitted to the City of Toronto, and public consultations with the community are ongoing. Local councillor Josh Matlow has been keeping a watchful eye over the site for many years and has been a key advocate in ensuring that any development includes much-needed park and open space for a neighbourhood that has long been deemed park deficient by the city.

“The focus has been on the public realm and to create park space and open space and something really significant and beautiful for the community and the city,” Matlow said. “That’s always been a big focus of mine throughout all the different discussions and negotiations leading up to where we’re at now. So what I made very clear at the get-go with Oxford: there was an agreement made over a decade ago with the community. And so if there was ever any discussion regarding changes, an emphasis would have to be on improving the quality of life for the community.”

Oxford has had a couple of community consultations already and presented its vision for the site, which includes five towers of varying heights that have yet to be established but look to max out at around 60 to 65 storeys, reconfiguring the intersection right at Yonge and Eglinton to beautify it and create a linkage for people to move from one side of the site through the open space to the other side.

According to Oxford, the Canada Square development will include “a new 10,000-square-foot community space also features prominently in the central precinct, with the potential to accommodate a daycare centre, recreation space or other community services.”

The development is concentrated on the periphery of the site to allow for the creation of a central open space that looks to include a covered outdoor area.

Gort said SERRA has expressed an interest in an increase of commercial development on the site to allow for people to live and work in the same area and since there are already so many residential developments on the way. In addition, some much-needed public amenities, such as a new school and open park spaces as well as a possible cultural space.

“That’s been really high on the agenda, to have a large open area, and the preliminary framework they showed us is dedicated to doing that, so we’re really enthusiastic about that,” Gort said.

And the idea of a groundbreaking public space with impact is one that has long resonated with Matlow.

“What is unequivocal is — and I’ll double back down on this — there needs to be a remarkable public space at the corner,” Matlow said. “It needs to be truly remarkable public space, not one that is a typical Toronto open space that reaches for the height of mediocrity, but one that leaves a legacy for midtown Toronto, especially given the amount of development that has occurred in the area.”

Matlow also said that the Canada Square site is an opportunity to create some “social support and infrastructure” that is missing from a community that has been dealing with unprecedented levels of residential development over the last decade. He also emphasized keeping jobs in the area such as at Canadian Tire, which has been a longtime resident at the site, and it is hoped that the company continues to be long into the future.

“We don’t want Yonge and Eglinton to just become a bedroom community in the sky. We want it to be a complete community with jobs,” Matlow explained, “where those of us who live in the area are able to walk to work rather than have to rely on an overcrowded subway system or have to drive — a place where people can work, live and play. That’s a complete community.”

It is early days, but it is clear that Oxford Properties has hit the right note with the community as consultations continue leading to the preparation and submission of the company’s rezoning application.

“This has been a journey. The vision for the public realm, which we have put a lot of hard attention into, is really exciting,” Matlow said. “I’m really happy to see that they are serious and that not only was it not ignored, that they are putting it right into their proposal. And the renderings that I have seen I think are really exciting.”