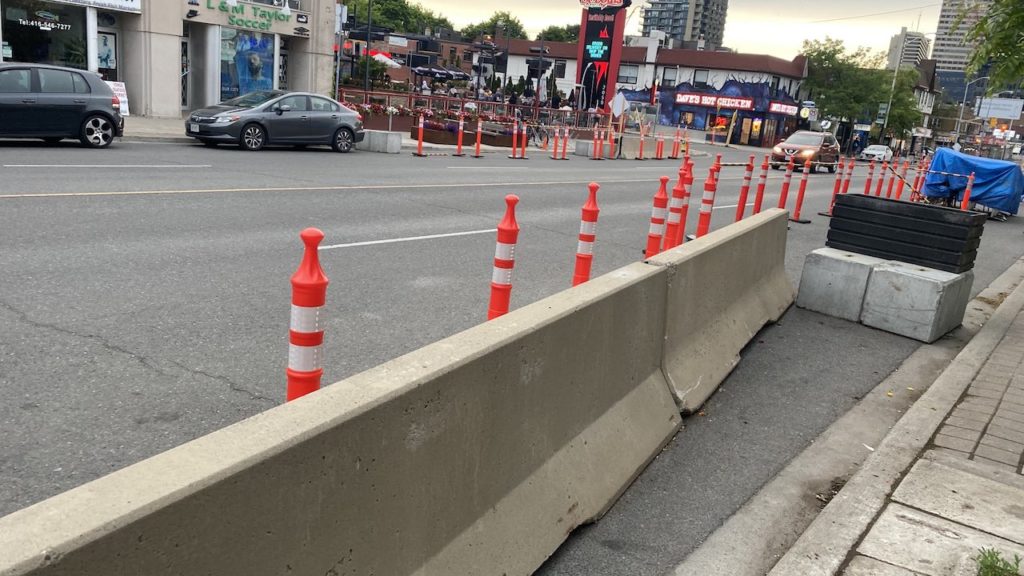 When CaféTO became a permanent fixture in the city’s dining scene, people were excited. It allows restaurants to increase their revenue, allows diners to sit outside and enjoy the sunshine, and encourages a feeling of community. If it’s done right.

The problem is that the patios popping up across the city are not exactly picturesque outdoor eating areas. Rather, they’re pieces of roads, sidewalks and even bike lanes enclosed by massive cement blocks and construction pylons, a far from inspiring setup. The less-than-stellar scenery inspired Josh Matlow, the Toronto City Councillor for Ward 12, to speak up about CaféTO on Twitter.

His tweet about CaféTO spurred conversation among community members, most of whom agreed with Matlow’s request for something that actually resembles a patio. “I like when planters are used rather than ugly concrete blocks,” replied one user. Bar Volo even responded with a suggestion:

Hey Josh, we faced our jersey blocks with wood. There needs to be more consultation with locally owned restaurants about CafeTO. New York has done a great job with similar programs. pic.twitter.com/Bv9CRxEJ0J

With what are being described as patios taking up bike lanes, cyclists are also forced to duck into car traffic, putting them in a potentially dangerous situation as a result of the CaféTO program. “I agree 100%. Also, the skinny pylons have been a bit of a mess for me biking across the city the last week,” another user responded.

An overwhelming amount of the responses pointed out that other patio programs in other cities seem to have mastered the art of the streetside patio, complete with actual decorations and some kind of an ambience. One user used New York City, an even bigger city with bike lanes and tons of car traffic, as a model for the program’s potential. Others pointed to Hamilton and Burlington as models, noting that barely leaving the city’s core makes a huge difference.

In short, Matlow and many of the community members he interacts with on Twitter want to see more from CaféTO. Like actual patios that keep everyone safe.