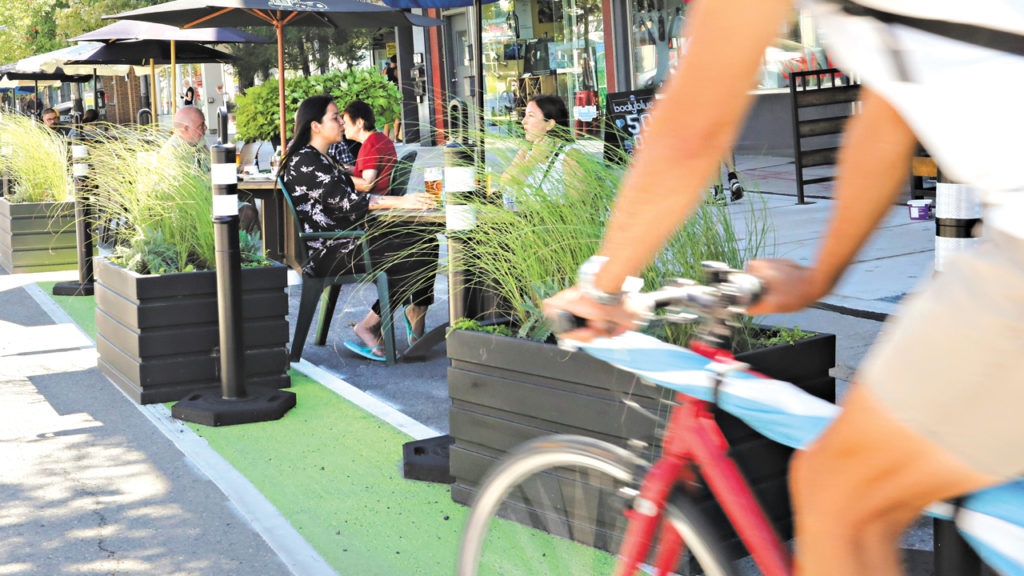 Another season of CafeTO outdoor dining spaces has concluded. It was bigger than ever before, and it was also more heavily criticized. Now, the city is soliciting the opinion of local residents and businesses to determine if the program will return as is, change, or be cancelled. A survey is being conducted by the City here until Nov. 15.

“Over the last three years, CaféTO has been a transformative program that has made our streets more vibrant and supported the restaurant industry during an unprecedented period of uncertainty,” said Mayor John Tory. “I look forward to hearing the feedback collected through this survey and I know it will help us continue to improve the program in the years to come.”

One might recall that another successful program that was developed during the pandemic, ActiveTO, was dropped without a moment’s notice earlier this year much to the chagrin of many a vulnerable road user who appreciated the increased outdoor spaces for recreation despite their temporary nature.

Of course, CaféTO benefits local businesses, so there is both a public good in lively streets and more outdoor spaces, but also the potential for increased economic activity.

Seen or used a #CafeTO patio? Own a restaurant in Toronto? Complete a short online survey to help us shape the City’s outdoor dining programs. https://t.co/h0nr6WQkk6 pic.twitter.com/qSeMOHRiqH

According to the city, in 2021, a similar CaféTO program survey received more than 10,000 responses. The results showed that 91 per cent of respondents believed that outdoor dining spaces should be allowed in Toronto in the future.

In 2022, 1,200 restaurants, bars and cafés took advantage of the CaféTO program that provides a matching grant of up to $7,500 to cover 50 per cent of the cost of the eligible property or site improvements related to curb lane café installations, sidewalk cafés or patios on private property.

CaféTO is a program that provides restaurants and bars in Toronto with the opportunity to expand their outdoor dining space through sidewalk cafés, curb lane cafés or patios on private property.

Through CaféTO, the City has amended its regulations to make it easier for eating and drinking establishments to install or expand patios on private property.

Once a program designed to aid local businesses during the pandemic, CaféTO was much appreciated when it was first introduced. And, this year, as well. But there has also been more critical than in the past, particularly regarding a large number of outdoor spaces that were ugly and unkempt as well as the gaudy use of tall orange pylons and cement slabs for spaces that didn’t have proper barriers or reflective materials.

Time to face the ugly truth about CaféTO patios: many are eyesores
– They make Toronto’s streets come alive, but do the outdoor patios have to look like construction zones? https://t.co/HwUruAGwuS

When the survey was posted on the Reddit Toronto site, many suggest the program should go further to include streets and neighbourhoods that should be made completely car-free including Kensington Market.

“Heck, just go check out Montréal. They closed down a huge chunk of Mont Royal to traffic last year, and it became a really fantastic pedestrian space. I think they did that on some other streets, too, but Mont Royal was the one I stumbled across this summer,” wrote Canadave.

In addition, there is a question of how well the CaféTO spaces work alongside other uses such as separated bike lanes that can result in cyclists having to manoeuvre through a maze of planter boxes, cement and pylons not to mention cars and delivery trucks that tend to park in the bike lanes when street parking spots are eliminated.

One poster on Reddit said it creates a dangerous situation for cyclists.

“Only issue with the patios is bikers will ride beside the patios and then cut in front of cars without looking. It’s super dangerous and have seen way too many close calls,” they wrote.

Comments regarding these points and others will help the city to decide how to best move forward with this very popular program in the future.