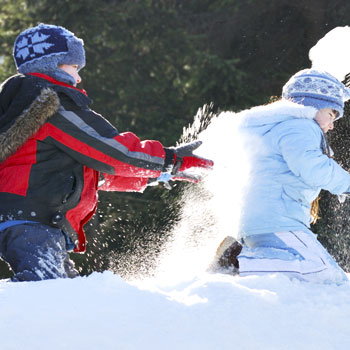 Our beloved children tend to be at their worst when they’re at each other’s throats. And so do we. Their conflicts can bring out the worst — or the best — in us.

It’s easy to go authoritarian. Saying, for example, “If you kids don’t cut it out, I’m going to.…”, or, “If you can’t stop fighting then we won’t be able to… go shopping… out for dinner… stay at the pool… on the slopes.”

Or worse, “Johnny, you started this fight and you hit your brother. Hitting isn’t allowed in this family, so go to your room.”

These responses include threats and putdowns for bad behaviour. And Johnny got singled out.

The parent, as judge and jury, has tried and convicted him. Sure, he hit his brother Billy, but do you know why?

Neither of the responses helps the combatants, who are clearly in need of assistance.

Johnny walks away angry at his parents for blaming him. He’s also now even madder at his brother, who effectively has gotten him into trouble.

As we head into March Break, we up the ante on family feuding. Family time can be heaven or hell. It isn’t possible to prevent sibling fights, nor is it desirable.

Doing conflict — the non-toxic way — is a crucial life skill, and if your kids learn conflict resolution skills at home they’ll do better in adult relationships.

Try this: When your kids fight, separate them if necessary and say, in a calm non-judgmental voice tone: “Let’s sit down and talk. Nobody’s in trouble — I just want to help you work this out.”

If you’ve not approached your kids that way before, they’ll be shocked, disbelieving, and you may have to repeat your offer a few times.

Your body language and voice tone matter immeasurably: If you project calm curiosity, they’ll buy in. Project anger or bossiness, and your kids will retreat.

Kids in explosive situations are used to getting in trouble for their misbehaviour, so they expect that. When you empathize, you get all their attention.

Then say: “I want to hear what happened. Who wants to start?” They’ll both talk at once. Say: “Stop a sec, you’re both going to get to talk. You’ll need to take turns.”

Choose the most agitated one, and say: “Johnny, what happened?” He’ll tell the story, with blaming.

Don’t listen for content! Get down from the judge’s bench and into the mediator’s chair — to help the combatants work out their problems by talking and listening to each other.

Keep asking Johnny: “Tell me more about what happened.” When Billy interrupts (as he will), say: “Billy, wait till Johnny’s done, then it will be your turn.”

When Johnny winds down, ask him: “How did that make you feel?” When he’s finished talking, ask Billy exactly the same questions.
Don’t say anything else.

Then go back to Johnny and say: “Tell me more about what happened.” When he winds down, ask: “How did that make you feel?” Then same again with Billy. And so on for three or four rounds till both kids calm down.

Then say to each kid, in turn: “It sounds like you were pretty mad at your brother. Is that right?”

The kid will say: “Yah I was really mad.” Say: “I get really mad sometimes — you’ve seen me mad. Everybody gets mad, it’s normal and there’s nothing wrong with feeling mad.”

You’re teaching them it’s okay to have bad feelings.

Then ask them each, in turn: “When you were mad at him, what did you do?” Then: “Was that a good choice?” Then: “What would be a better choice to do when you’re mad?” Then ask: “What needs to happen now?”

You’ve just taught your kids to identify their feelings, use their words, understand that they get to choose good and bad choices, and to put things right after a fight. Congratulations!