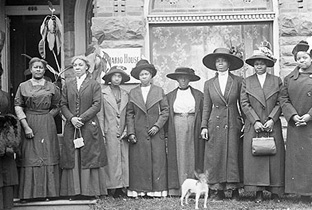 How much do you know about Black history in Canada and in Toronto? How much is there to know? “The average sixteen-year-old in Canada can tell you something about slavery and abolition in the United States,” Toronto author Lawrence Hill once remarked, but “do we know that the story of African-Canadians spans 400 years, and includes slavery, abolition, pioneering, urban growth, segregation, the civil rights movement and a long engagement in civic life?”

As we begin Black History Month 2012, here are a few things you might want to know.

1. Back in 1926, African-American historian Dr. Carter G. Woodson initiated “Negro History Week” to coincide with the birthdays of Abraham Lincoln and Frederick Douglass. But there’s too much history for just one week so, on both sides of the border, February became Black History Month. It was celebrated in Toronto as far back as 1950. And this year, the month is one day longer!

3. Uncle Tom’s Cabin is just outside Dresden, Ontario. That is to say, the cabin of Reverend Josiah Henson, on whose life Harriet Beecher Stowe based the classic anti-slavery novel. It’s only 300km from Toronto.

4. You may know that the Underground Railroad led to Windsor, St. Catharines and Owen Sound, but did you know about the Toronto connection? In 1985, the site of what is now Inglenook Community High School, the Toronto District School Board’s oldest continually operating school, was discovered to have been a terminus of the Underground Railroad back when it was inhabited by Lucie and Thornton Blackburn in the 1800s.

5. Black loyalists and slavery are two aspects of Canadian history of which many people are quite unaware. Black history in Canada goes back as far as Samuel de Champlain, whose translator was a free African polyglot named Mathieu Da Costa.

Don’t want a history lesson? Why not read a great novel, like Half-Blood Blues or The Book of Negroes. (You can’t escape history, so you might as well enjoy it.)

Evan Andrew Mackay is a Toronto playwright and humourist who writes about culture and social justice.