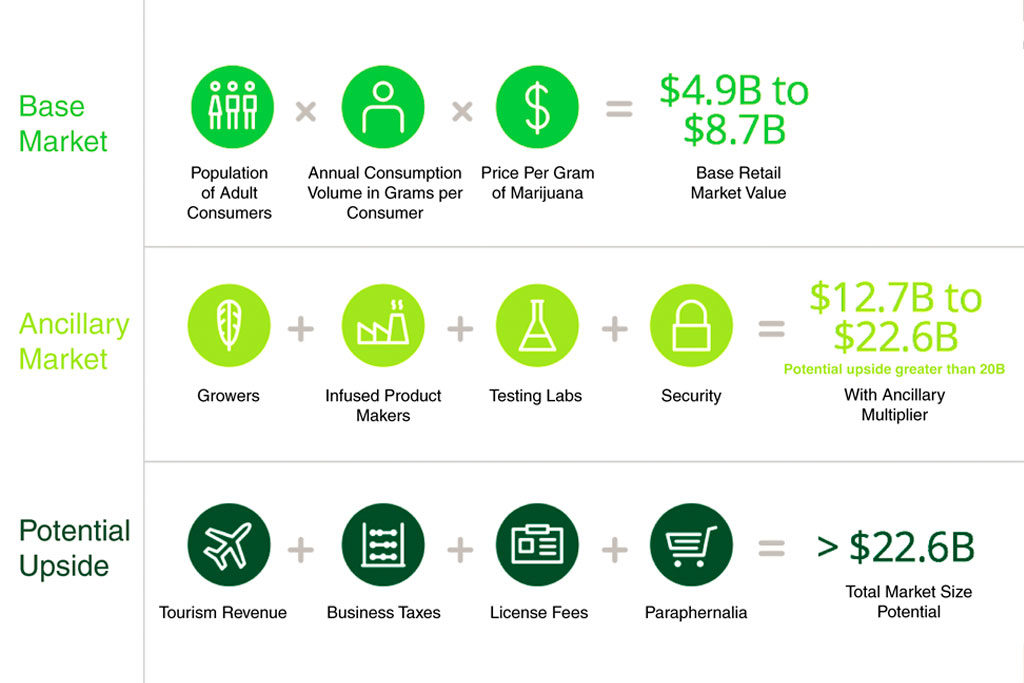 Since Justin Trudeau’s election, the Canadian cannabis space has seen  significant growth both in public and private sectors. The industry is gearing up for its entry into the legal recreational cannabis market set to open up by July 1, 2018.

Although the new cannabis bill (C-45) introduced in April presents some uncertainty as to how legalization will roll out, it provides a new landscape for Canadian businesses and investors looking to cash in on the green rush.

A recent study conducted by Deloitte puts the potential sales of recreational cannabis alone as high as $5 billion per year to start, “a number on par with the Canadian spirit market.” Taking into account the potential of ancillary business, such as security and transportation, as well as consumers “likely to consume,” this economic potential approaches $23 billion per year.

The publicly traded market saw its stock peak in November 2016 and in April of this year, with the introduction of Bill C-45, but has since taken a significant plunge.

Growing pains of this nascent industry have led to issues related to insufficient product supply, pesticide misuse and uncertainty regarding potential distribution in the upcoming recreational market. Although the drop in stocks may be discouraging to some, for those with an eye on the long-term, now is the time to buy.

“With so many licensed producers [LPs], testing labs and other ancillary businesses going public and raising funds, there are ample opportunities to invest,” says Natasha Raey, an entrepreneur and leader of several cannabis- and non-cannabis-related ventures. “Since we’re essentially at the ground floor of legalization, there are a lot of merits in investing early.”

There are 19 publicly traded LPs of medical cannabis eager to enter the legal recreational market.

“As an investor, I look at how I can differentiate between the names [of the LPs]. I want to see what the financial numbers look like and who will capture the market from a sales standpoint,” says Mick Mitrovic, a Toronto portfolio manager and financial advisor.

Consider the business model, access to capital, expansion plans aimed at ensuring consistent supply and methods of production to determine the success of an LP. Production methods include closed box — an indoor growing model for high quality at minimal cost — or greenhouse.

“Greenhouses could be riskier in the long run,” he says as the environmental control upgrades make it a more expensive option.

So what will make one business succeed over another?

“The companies that will succeed in the cannabis industry are ones who are able to execute on their plans and adapt to a dynamic marketplace,” says Max Zavet, co-founder and president of Emblem Cannabis, a publicly traded LP.

We may not have heard much about cannabis brands up to this point — due to medical advertising restrictions — but brands are the connection to the consumer.

Brands provide an additional point of differentiation for consumers and a channel of producers to acquire customers and drive market value.

Michael Lickver, the incoming executive vice-president of strategy at Cannabis Wheaton, a streaming company that provides financing to existing LPs and applicants to build and expand their cultivation facilities, says those looking for a quick turnaround on their investment should know the cannabis industry is more of a long-term investment.

“My understanding is that it took the legal alcohol industry approximately 15 years to catch up to the illicit market sales. Nothing is going to happen magically overnight here,” he says.

If Bill C-45 is any indication of how things will unroll, it will take time for the system to integrate and respond to the current demands.