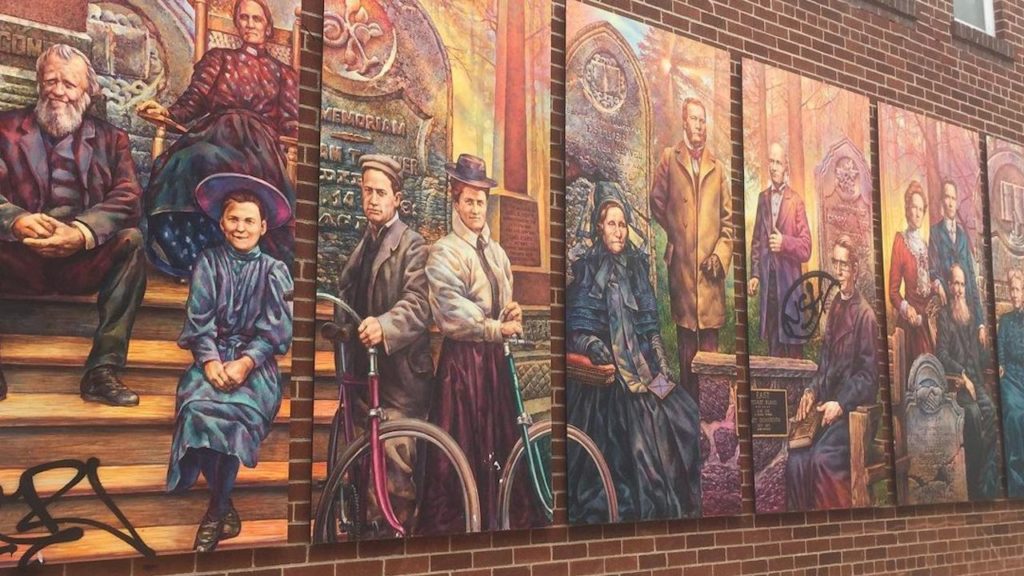 The first week of March means it’s time to get over the February blues and start planning spring adventures. We might have more snow on the ground than we’ve had in the last few years combined (or so it feels like!) but that doesn’t mean we can’t start dreaming of longer days, horrible sunburns and afternoons spent walking for longer than five minutes without freezing our fingers off.

If you need something to look forward to, check out these fun and interesting walking tours that will help you see Toronto from an all-new perspective this spring.

The Village of Islington Murals

Islington’s Art Walk features five stunning blocks of murals that depicts the community’s history through important people, places and events dating back to the early 1900s. Nestled between the cutest cafes, restaurants and shops in the area, the 28 murals are mostly photo realistic and take up a collective 15,000 square feet of outdoor space. Seasonal guided tours through the area are available through the Village of Islington, or you can download the Tour Map and guide yourself.

GPS My City has plenty of self-guided audio tours, but the Distillery District tour is one of the best. Through the app, you’ll be taken on a journey to 11 cultural hotspots along the neighbourhood that was once an industrial complex, but is now a National Historic Site of Canada. Stops along this walk through Toronto’s favourite pedestrian hub include galleries, bistros and vintage stores. The European cobblestone path makes this walking tour feel romantic and intimate enough for a fun date night activity.


Did you know Canada’s largest university just might have some ghostly spirits living in the corridors? On the Campus Secrets and Spectres Ghost Tour by The Haunted Walk, you’ll get the chance to hear all these tales while following a cloaked guide through the University of Toronto. The guide – who carries a lantern to ward off evil – will tell you about Queen Park’s haunted tunnels, the “grey lady” frequently spotted in the chapel of Trinity College, Lord Dufferin’s chilling death-predicting apparition and the tale of the Cookie King Mr. Christie’s son and his mistress who continues to haunt Christie Mansion. These stories and more are told in the 1.5-hour tour are so bone-chilling, even the skeptics in your group will feel uneasy.

As part of their Discovery Walks, the city of Toronto offers route maps that help you explore the city from a whole new perspective, including this one which takes you out of the congested city and into the fresh air among the trees. You can start at the Humber Arboretum, which is home to over 1,700 plant and wildlife species, or from the environmentally-conscious Humberwood Centre. From there, you’ll take a looped trail that goes back-and-forth between paved roads, hard-packed grounds and grassy paths along the West Humber River.

Urban Adventure’s Beer Makes History Better tour isn’t available until May, but trust us, it’ll be worth the wait. This four-hour tour will prove that beer makes anything better as you get a history lesson in how Torontonians in the past have used craft beer to ease their pains from Depressions and wars. (We should also add global pandemics to the list.) This classic tour will have you visiting vendors and pubs in the St. Lawrence Market and the Distillery District, and you’ll even be treated to one craft beer at each stop!

Explore both Toronto’s concrete jungle and its stunning parks and gardens throughout another of the city of Toronto’s Discover Tours. This tour is great for tourists and newcomers to the city, as it takes you to Toronto’s most significant structures including the CN Tower, Old Town City Hall and the St. James Cathedral. But this tour is also a great resource for born-and-raised Torontonians who may have overlooked some of the green spaces that are nestled between the city’s tallest skyscrapers, like Olympic Garden and Simcoe Park.

If you’re a nerd for buildings, the Architectural Conservancy of Ontario (ACO) has plenty of self-guided walking tours that are compiled from research about structures both old and new. ACO’s Toronto Branch offers a self-guided tour map that takes you through one of Toronto’s most architecturally rich neighbourhood, The Annex. The architecture along this walk tells of Toronto’s history, as you’re taken from the Victoria-Edwardian homes that are so common in the neighbourhood, to a Regency-rivival style semi-detached home from 1902. Then you’ll see a 1960s apartment building that demonstrated the shift to the modern style buildings found at the end of the walk.