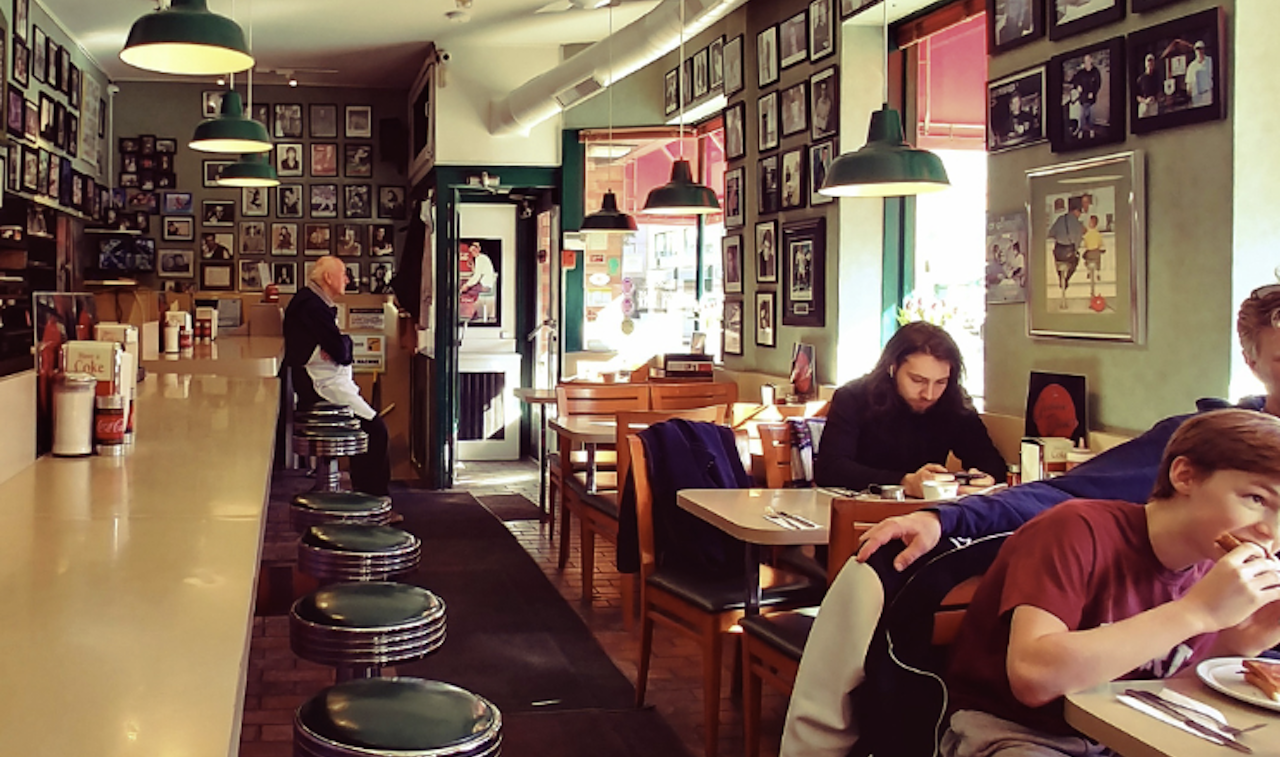 The best diners in Toronto

Since the 1950s, diners have been a staple choice for filling up on the best comfort foods from breakfasts to burgers, milkshakes and beer. Between the leather booths, bar stools, and friendly service, there’s something warmly familiar about a diner that has the power to make you feel at home, even if it’s your first time stepping inside.

Luckily, Toronto has plenty of them, so check out our list of top diners in Toronto to satisfy that comfort food craving.

Family-owned and operated, Patrician Grill has been a staple in Toronto’s diner scene since the 1950s. “Eat here. Diet at home” is the company’s slogan, and they stick to their word. There’s an assortment of jams that make the restaurant unique, but the massive menu is exploding with hearty options, like homemade soup, fried eggs, fish and chips and meatloaf. There’s also soda floats and milkshakes, perfect for washing down a slice of homemade apple pie.

Since 1944, this Toronto institution has been serving up hearty sandwiches, all-day breakfast and made-to-order favourites like pancakes and french toast. It’s become such an icon in the fabric of Toronto’s history that many celebrities have come to dine at Avenue, and their autographed pictures line the walls. It’s been operated by Louis Klasios and his family since 1970, and they’ve kept the warm, retro vibe of the place alive and well.

There’s a few Fran’s locations around the city, and the mini-chain is one of the most famous diner businesses in the city. Open 24 hours, the historic eateries offer up breakfast, lunch and dinner alike, with milkshakes, pancakes, steaks and salads all populating the menu. The first Fran’s was opened at Yonge and Dundas by Francis “Fran” Deck in 1940, and the place has been iconic ever since.

This no-frills, uptown diner is nothing if not old school. There’s the neon decor, red vinyl banquettes, and an open kitchen that screams retro. Come for the vintage vibes and stay for the food, where breakfast is served all day, and the food categories are given out-of-this-world names like satellite sides and planet poutine. Lunch and dinner fare, including burgers and hot dogs, are also available.

If you’re a Shawn Mendes fan, you might recognize George Street Diner from his “Life of the Party” lyric video. In it, Toronto plays backdrop as the Canadian singer sits at one of the vintage red leather booths found in this “wee” Irish-Canadian eatery. But, seeing it on screen isn’t enough. You won’t want to miss the chance to try the signature Ultimate Irish Breakfast, which wouldn’t be complete without Farrelly’s Famous Irish Soda Bread.

If the name alone sounds like warm summer days, that’s exactly the kind of wholesome atmosphere this diner offers. White Lily Diner displays the best in the region by working with local suppliers and offering a beer and wine list that comes entirely from Ontario. At White Lily, the bread is fresh, the donuts are made daily, and the meats are smoked in-house. The all-day breakfast means you can get the customer-favourite hash browns every time your cravings kick in.

The red leather booths, checkered floor print and large front windows definitely show off the retro style of Flo’s Diner. This Yorkville hotspot is the kind of place you stop by for a coffee and end up chatting with the cook all morning. Flo’s is known for making a mean eggs benny, which can be enjoyed while taking in the city views from the rooftop patio.

With bright walls and a marble countertop, this restaurant may be a bit more contemporary in style, but that doesn’t mean it doesn’t have the same comfort and coziness of diners from the 1950s. The large portions have made Frankie’s Diner a staple in Queen West. They’re also known for their famous burgers, which are ground and made in-house, then topped with a special secret sauce.

From the front, this aptly named diner may look like just any old family restaurant, but along the side, a large, colourful logo will catch your eye. It has certainly caught the public’s eye, as the Amazing Ted’s Diner has been featured on shows like Orphan Black and the Handmaid’s Tale. Inside, bold leather booths are packed tightly between brick walls that display hangings with stories dating back to the ‘50s when this Scarborough diner first opened. While there’s plenty on the menu, the literal shrine to bacon behind the counter is a sign to go for a greasy breakfast.