Behind the scenes at Montgomery’s, the upcoming restaurant from Guy Rawlings and Kim Montgomery - Streets Of Toronto
Skip to content 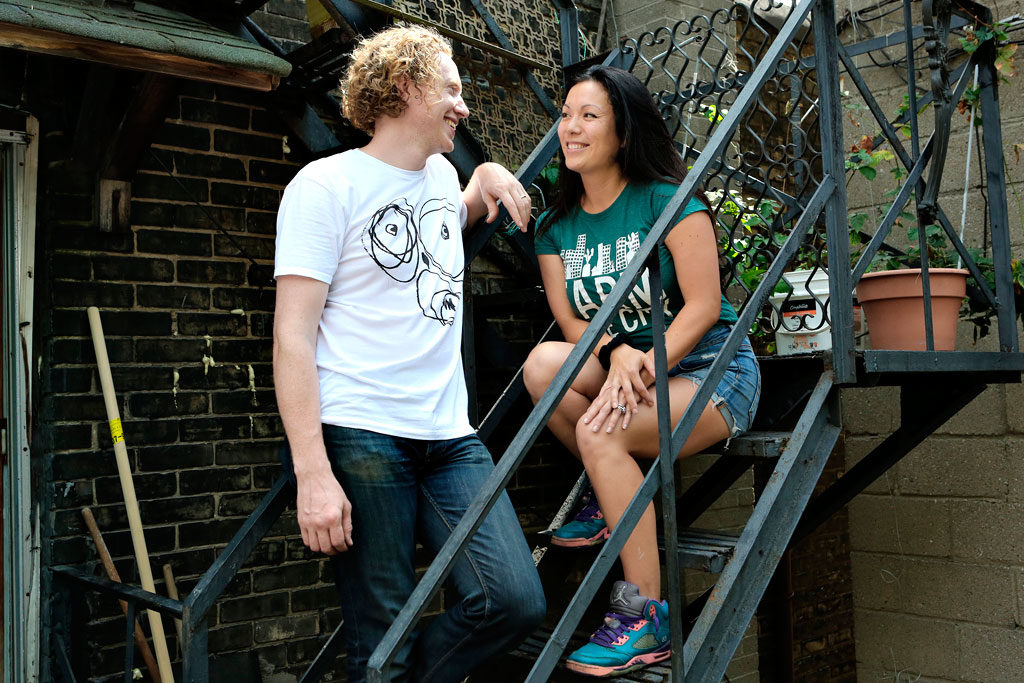 When Guy Rawlings isn’t covered in reno dust at his upcoming Toronto restaurant, chances are you’ll find the chef up in the Kawarthas, foraging in the woods for ingredients.

From helming the kitchen at Brockton General to overseeing operations at Bars Isabel and Raval, chef Rawlings has always been one to watch. So when he stepped out to do his own thing earlier this year, local foodies sat up and took note.

Following months of renovations to their 19th-century digs, Rawlings and his wife Kim Montgomery are finally set to open Montgomery’s on Aug. 15.

A July visit to the former Tom’s Family Restaurant, located at 996 Queen St. W., reveals a dark and dusty room, with makeshift lighting strung across the length of the empty space. But the acclaimed young chef glows when describing his vision for his Canadian restaurant.

“It will be very intense when you first walk in,” the tall, ginger-haired chef says, with debris fine as flour coating his all-black ensemble. “Whether you’ve had a bad day or are just ‘hangry,’ you’ll forget it all at the door.”

Upon entry, diners will immediately confront an open kitchen.

“I’ve always enjoyed the idea of a kitchen in the front,” Rawlings notes. “They have the most energy.”

Chef points out the original tin ceilings and exposed spruce ceiling beams, extending his arms — each tattooed with one of his kids’ names —  to showcase the details of the mid-reno space.

“As you continue in, the room narrows and then opens up to a soothing dining area that will seat 45 to 50,” says Rawlings. A trip up a slim staircase reveals a rooftop rimmed by planters where he’s currently growing fresh mint and, soon, hard-to-find herbs.

The England-born father of two has racked up more than 15 years of experience in the restaurant industry — here, in New York City, China and across Europe — since the age of 17. He wants Montgomery’s to represent his finest culinary achievement.

“This is the first time I’ve built a kitchen to my own specifications,” he says. “I’m excited to finally have my own place.”

Rawlings and Montgomery first met in 2011 at a foodie event and quickly fell in love.

“We were engaged in two months, had our first child a year later, got married the next year and had our second child soon after that,” Montgomery says.

Montgomery will handle the day-to-day operations of the restaurant, drawing on her  background in PR and event management.

“We hope to continue to grow and create and push each other as individuals and together as a family,” says Montgomery.

The couple’s goal for Montgomery’s is simple. “I want people to enjoy a delicious meal in a comfortable environment where they can actually talk to the people they came with,” Rawlings says. “I’ll be in the kitchen from 11 to 11 every day making minimalist, seasonal Canadian dishes using local ingredients and traditional techniques.”

The restaurant will occupy the space somewhere between causal and upscale; diners can expect to pay about $100 for a meal for two. Sharing dishes dictated by the fruits of each season will be served, helping the restaurant embrace an earth-friendly ethos. Rawlings doesn’t expect diners to know the intricacies of each dish, yet his Canadian “back-to-basics” concept is an elaborate process.

Recently, chef and his team have been hunting in the Kawartha Lakes region for ingredients such as wild ginger, lily buds and wild green grapes. From there, the essence of each ingredient will be captured using age-old techniques like drying, salting and fermenting. Though these processes can take anywhere from two weeks to two years (two pig legs are slated to cure for at least one year), Rawlings says he will combine these ingredients with seasonal foods to add depth.

Diners can expect to encounter dishes that place the focus on simple cooking. Think hearty green leafy vegetables that are poached and then seasoned with a house-made garum (a fermented fish sauce) and vinegar.

“This is what people did before restaurants existed,” chef says. “We are reverting back to old ways, and lots of these traditions led to delicious techniques. People found creativity in necessity, and that’s what I’m doing.”

Yet the effort and old-world approach hardly end there. Rawlings and Montgomery are working with urban growers in the community and buying fruits and vegetables from in-area partners.

The couple’s green outlook extends to their waste: Montgomery’s will also aim to produce zero landfill. The Ontario produce that’s purchased will be delivered in reusable crates, and glass bottles and cans will be recycled. A worm casting program is in the works to manage compostable waste — a process that helps herbs grow faster, imbuing them with more flavour.

When customers get their first taste of Montgomery’s, Rawlings wants them to describe their experience in one way: “I hope people find this project refreshing — refreshing in terms of ideas.” he says. “I’m being creative — going back to basics — to make something delicious. I hope people like it.”