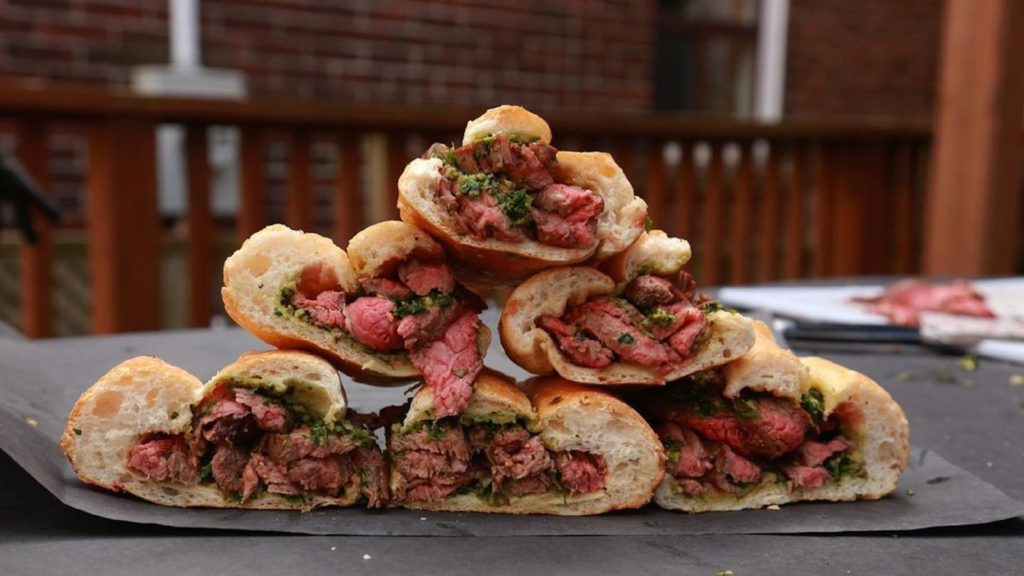 During the pandemic, takeout is ruling the culinary world. And that has given many in the business and those new to it the opportunity to experiment and try something new, often with delicious results. Case in point: BEAR Steak Sandwiches.

BEAR Steak Sandwiches is a great local sensation serving up $16 flank steak sandwiches with chimichurri on Sundays that are prepared in the Little Italy backyard of the co-owner’s mom.

“Ricky and I are born carnivores, and have loved grilling for as long as we can remember,” explains Aki Erenberg, one of the two masterminds behind BEAR. “While I have formal experience working in kitchens for my high school and university career, Ricky got familiar with grilling last year and invested a lot of his time at the farm grilling all local cuts, using a mix of his Kamado smoker and a standard propane grill. Both of us loved grilling for friends and family, and wanted to share that passion with the neighbourhood.”

The idea for BEAR Steak Sandwiches originated in co-owner Ricky Barrientos’s backyard, Erenberg explains. In fact, they used that same space as a headquarters until last week.

“One night after lockdown ended, Ricky grilled a few friends the same steak sandwich, and it was an immediate hit. A few months later in lockdown we thought ‘why not share this with everyone, and make this a city staple?’ ” he says. And so, BEAR Steak Sandwiches was born, and serves up made-to-order tarts and steak sandwiches for pick up in Little Italy on Palmerston Avenue every Sunday.

The decision to serve only steak sandwiches and tarts was a simple one for the two friends.

“Not complicating the menu allowed us to hone our craft and produce and serve a consistently delicious product every service,” Erenberg says. “We initially wanted to do different toppings, but Ricky’s homemade chimichurri is absolutely divine, and we decided this was the only other condiment worthy of our sandwich,” he says. And the tarts? Well, they’re an added bonus. “The tarts came from the notion that everyone has a second stomach for dessert,” Erenberg says, “and after seeing the tarts fresh baked on the Golden Wheat Bakery counter we knew they would complement our sandwich perfectly.”

To prepare to serve their creation to the city, the duo spent weeks perfecting the recipe.

“We didn’t want to stray too far from the steak/chimichurri combination, but did test runs of different cuts of meat, breads, and even methods of preparation — the sous-vide was not initially a part of our preparation,” Erenberg says. “After a few weeks of using our friends and family as guinea pigs, we finally came to our current recipe, emphasizing simplicity and quality.”

A simple stroll of the neighbourhood allowed them to get all of their ingredients, which complements their mission to stay simple and provide high quality food. The rolls for the sandwiches come from Golden Wheat Bakery, the same place as the tarts, the steaks come from Grace Meat Market, and the vegetables come from a local grocer.

When the restrictions are lifted, the two friends plan to keep running BEAR Steak Sandwiches. But, they plan to move to a more permanent, indoor space, which has a commercial kitchen and gives Barrientos’s parents their backyard back. And, when that happens and things pick up even more, they’ll discuss opening for more than just Sundays.

“As much as we’d love to focus solely on BEAR and quit our day jobs, we have bills to pay,” Erenberg says.

For now, BEAR Steak Sandwiches can be picked up on Sundays at 707 Dundas St. W., behind the community centre. Order online before 5 p.m. on Fridays to secure an order.