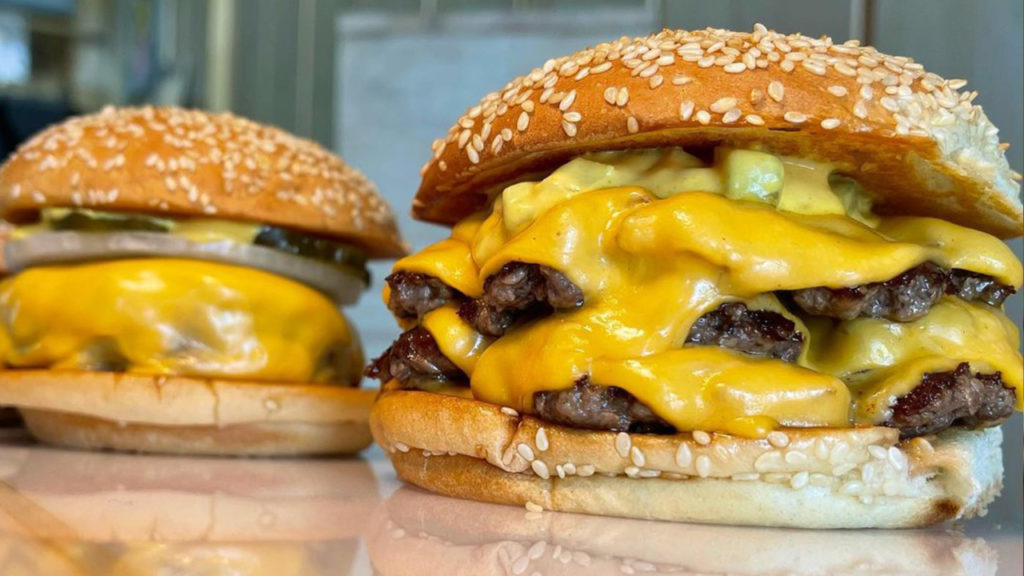 Pick your fighter: Matty’s Patty’s, Aloette or Harry’s Charbroiled? Three of the city’s best chefs known for their high-end eateries (and in some cases, Michelin stars) have all thrown their toques into Toronto’s more affordably priced burger scene. But which celeb cook takes top prize? We did a deep dive into the trio’s offerings so you don’t have to.

This Trinity Bellwoods haunt for takeout-style burgers, fries and classic chocolate shakes is a citywide phenomenon thanks to its gregarious namesake and co-founder, Matty Matheson, of Maker and Seafood Palace acclaim. The simple counter-service hub features made-to-order beef burgers plus plant-based options and sides to complement every mouth-watering order. What many locals don’t know is Matty’s Patty’s Burger Club originates from RVC Aloha in Hawaii and was created by Matty Matheson and Pat Tenore, founder of RVCA, a California-based clothing retailer. Located directly across the street from Trinity Bellwoods Park, Matty’s Patty’s Burger Club serves Matty’s signature smash burgers made from AAA beef brisket and chuck. The short and sweet menu has three burger options (the seven-ounce Matty’s cheeseburger, the Patty’s or the plant- based Impossible patty option) all ranging from $9 to $28, depending on whether you opt for a single, double or triple and if you make it a combo. Sauce options are also succinct, with your choice of Matty’s Patty’s sauce, a pickled jalapeno mayo or a spicy ketchup and sides. For the more health-conscious consumer, you can forego the bun and opt for a lettuce wrapped patty for no additional cost. 923a Queen St. W.

Topped with fried Beaufort cheese giving it a crispy edge


Aloette is a neighbourhood bistro from none other than celeb chef Patrick Kriss, serving up haute cuisine meets  comfort food and now proudly boasting an iconic Michelin Star. The upscale diner’s burger drew a cult-like following since the spot opened its doors in 2017. “We’ve definitely done a few lettuce wrap burgers or burgers with only our garnish,” says Solomon Mason, the executive chef at Aloette. “I think we’re lucky that our burger is so steak-like since it is coarsely ground fresh every day. Because of this, it doesn’t feel weird to eat it with a knife and fork.” The burger, which has been on the menu since day one, rings in at $24 with hand-cut fries and rubs shoulders with other diner-chic menu items and French-inspired cuisine, including lemon meringue pie, oysters, tartare and brie on toast. Topped with fried Beaufort cheese, which gives it a crispy edge, along with shredded lettuce, sautéed onion and Aloette aïoli on a house-made bun, this burger is a mix of brisket and chuck that will make it feel like you’re digging into a steak. 163 Spadina Ave.


If you’re a true Torontonian, you might remember Harry’s Charbroiled when it was nestled deep in the Parkdale neighbourhood, off Jameson Street behind the No Frills, in an unassuming divey spot with multi-coloured Christmas lights. Back in 2019, the restaurant took its short and sweet burger menu over to College and Palmerston, moving into the space where Woodlot used to be. Since then, the spot has evolved,with a food truck and merch, but the menu has remained tried-and-true. Grant van Gameren’s diner features seven burgers on the menu, including the classic beef patty, dubbed the Jane, available in five versions including the Plain Jane, Big Jane, Double Jane, Vegan Jane and Classic Jane. From single to double, dressed with cheese and all the fixings to hot peppers and spicy ketchup, the spot also has pork-based and plant- based options too. Opt for the red burger — a chorizo-based patty topped with havarti cheese, pineapple and jalapeno mayo — or the diner’s green burger — the Vegan Jane, an Impossible vegan patty with Harry’s sauce, lettuce, tomato, pickles and onion. The burgers range from $10.29 to $14.29 and come with delicious thick-cut french fries. 293 Palmerston Ave.