Band of the Week: Plants and Animals - Streets Of Toronto
Skip to content 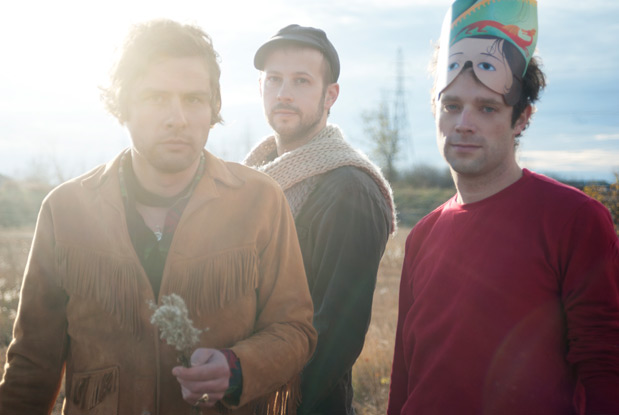 It was an angry neighbour in France who pushed Plants and Animals to finish their new album. And we salute him. The End of That represents what the trio does best — an unbeatable combo of jam-band and folk rock. Clearly, with this third album, the guys were going through some heavy stuff. But drummer Matthew “Woody” Woodley says they tried not to take it too seriously.

They’ve come a long way from their roots as an instrumental group. From the sometimes breezy and often danceable jams, their sold-out Lee’s Palace show this weekend guarantees a good time for indie rock purists. Plus, a few surprises, Woody adds.

Tell me a bit about the new album. Did you approach it differently than Parc Avenue and La La Land?
Yeah, a little bit. It’s just that we demoed the songs quite a bit more before actually going into the studio and converting them to tape, and with the first two records we sort of flew by the seat of our pants in the studio, and kind of wrote as we went. And sometimes we shaped the songs at the latter stages you know? Sometimes the lyrics weren’t written even though we had the song half done. So this time we thought it would be better to sort that out before we went in to do it, I guess that’s how most bands do it.

I heard that an angry neighbour gave you guys the final push when recording. What happened there?
Yeah we recorded in a house, outside of Paris, in a residential neighbourhood. And we were maybe 10 days into the process, maybe two weeks. It was France’s equivalent of Labour Day, and this guy had his whole family over in the backyard, probably eating some bread and cheese and drinking champagne and stuff, and he didn’t want to hear loud music that day, so, yeah he added a bit of pressure. It was a blessing in disguise, and we decided to start having a bit of fun.

The lyrics seem to be a bit more dark and heavy compared to your previous stuff.  What were you guys going through at the time?
Life. It’s pretty direct, just listening to it, you can hear what was going on and what we were going through. There’s a heaviness to it, but there’s also a lightness to it too. There’s kind of a wink in there.

Seems to me there were a lot of different sounds in this album that fall into the Plants and Animals vibe. “Before” is breezy, and “Lightshow” is more dancey. So how would you describe your sound for someone who hasn’t heard of you before?
It’s dynamic, and the live shows are like that too. We’ve always tried to have lots of different flavours and different colours in one album. I think this is the most cohesive thing we’ve ever done, but still there is that difference. I can’t ever see us playing any other way though.

Any plans to add a bassist to the live shows?
We have a bassist — he’s sitting beside me in this travelling caravan! He’s been playing live with us this whole tour, and we also did a few shows with him in the fall.

What can we expect from the Lee’s show Saturday night?
I heard it sold out, right?

Yeah, it did.
That’s exciting! We’re going to have a couple guests. So there will be more people on stage with us. We’ve got some friends. The show sounds like the album in a lot of ways. Whereas in the past, we couldn’t do that with Parc Avenue. The live show is the most direct representation of anything we’ve recorded.