Balaclavas: everything you need to know about this T.O. winter-proof trend - Streets Of Toronto
Skip to content 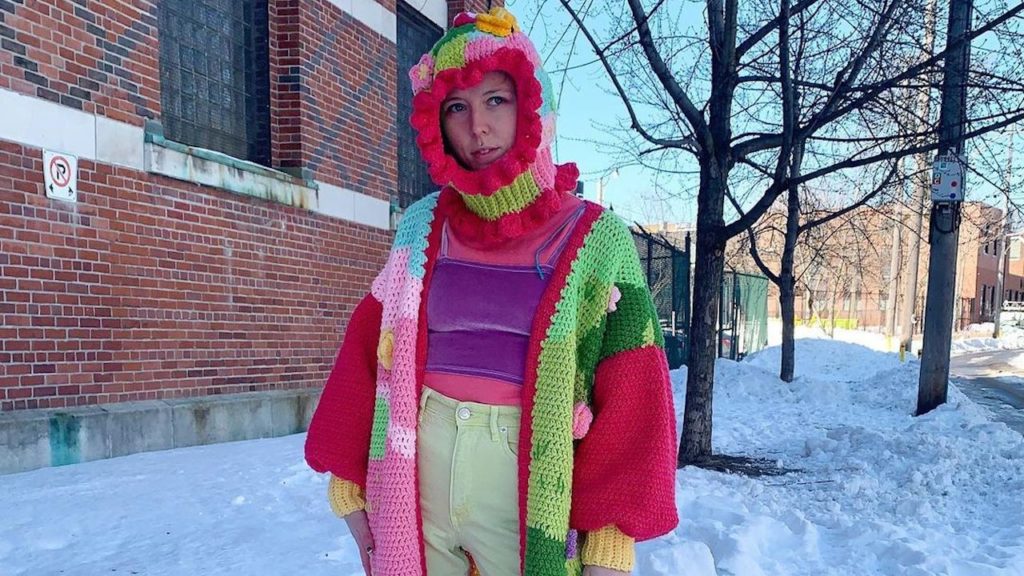 The balaclava trend has been making its presence known for fashion-forward Canadians since last winter, when the garments were first making debuts on the street. Fashion balaclavas were essentially blueprinted for the fashion community by international influencers, high end designers and celebrities, until the inspiration was planted accordingly into the DIY minds of knitwear and wearable art designers any and everywhere.

Come December 2021, it seemed like every cool Torontonian was in on the balaclava wave, adorning variants of colourful statement balaclavas, knit hoods or bonnets for a trip to the grocery store.

Fashion balaclavas tend to be expensive, factoring for the time and labour of the creator. The more complex and unique the balaclava, the more expensive it is likely to be.

Alexandria Masse is a 21-year-old textile artist studying at NSCAD University in Nova Scotia, originally from Windsor, Ontario. Masse’s balaclavas can require up to 30 hours of assembling, and sell for anywhere between $200 and $700, depending on the intricacy of the piece. She sources her 100 per cent Canadian wool from a Maritimes manufacturer, Briggs and Little Mills Ltd.


Either you pay for the clout, or you learn to make your own (and quite a few people are doing the latter), turning to social media for inspiration.

Plenty of people in the knit and crochet community share DIY tutorials so that you can easily learn to make your own balaclava. Others sell their knit or crochet balaclava patterns so that you can follow their blueprint exactly.

Even CNN has reported on the balaclava, an “unusual sartorial staple.” The article, titled “Behold the balaclava: Why a 19th century army accessory has taken over social media,” reports that search interest is up on Google too, pointing to “the question “how to knit a balaclava” growing more than 5000% in the past 12 months.” Jessica Payne, Pinterest’s head of fashion, also told CNN that searches for balaclavas have jumped 230 per cent since the start of November.

But the trend has brought up discussions about privilege in fashion, and who gets to wear trends as “fashion.”

Hyperbae published an article on Jan. 24 warning readers to consider the privilege that comes with wearing a balaclava, referencing a TikTok video produced by user @laurenblackborow which has since been taken down. The article refers to it as “a now highly criticized video, demonstrating how to turn a scarf into a balaclava, to which many responded that she was just showing her audience how to make a hijab. One comment read, ‘Didn’t they call hijabs and niqabs oppressive and ugly, now everyone wants to wear a balaclava. Funny how that works.’”

Toronto-based singer-songwriter Nemahsis chimed into the conversation by sharing an airport incident with her Tiktok followers. She explained that security assumed her balaclava was an accessory rather than her hijab, despite her attempts to explain the crucial difference, and the garment was subsequently ripped off her head – leaving her exposed.

The resulting dialogue has garnered a lot of momentum from Tiktok, now making headlines in large publications that were previously only reporting on where to buy balaclavas, and in many cases still are. Business of Fashion says “[on Tikok users are] pointing out that [white individuals are] able to wear such headpieces without fear of being racially profiled or targeted.”

The article also quotes Sidney Morgan-Petro, head of retail and buying at WGSN Marketing, who calls the trend “a perfect storm”, and GQ fashion critic Rachel Tash-jian. Both individuals attribute balaclava popularity to the COVID pandemic, and society’s consequential desire to experiment with a more extravagant wardrobe after long periods of social distancing and self isolation.

Masse, who was also referenced in the BOF article, says she didn’t start making balaclavas to profit off of the trend but more generally to take advantage of head pieces as wearable art. Now balaclavas have become a “super trend,” says Masse, noting that her social media feeds are oversaturated with these pieces. Consequently, she has begun referring to her designs as head pieces, so as to shift the focus from the trend, back to the unique nature of her designs.

Masse still gives credit where it’s due though. “I’ve been introduced to the streetwear community a lot more [since starting to make balaclavas],” an advance from the more insular crochet and knitwear communities in which Masse previously shared her work.

Regardless of the angle, balaclavas continue to pervade as a hot topic in the fashion community. They are cool, practical and definitely NOT going anywhere soon. Here are 12 Canadian creators making unique fashion balaclavas.