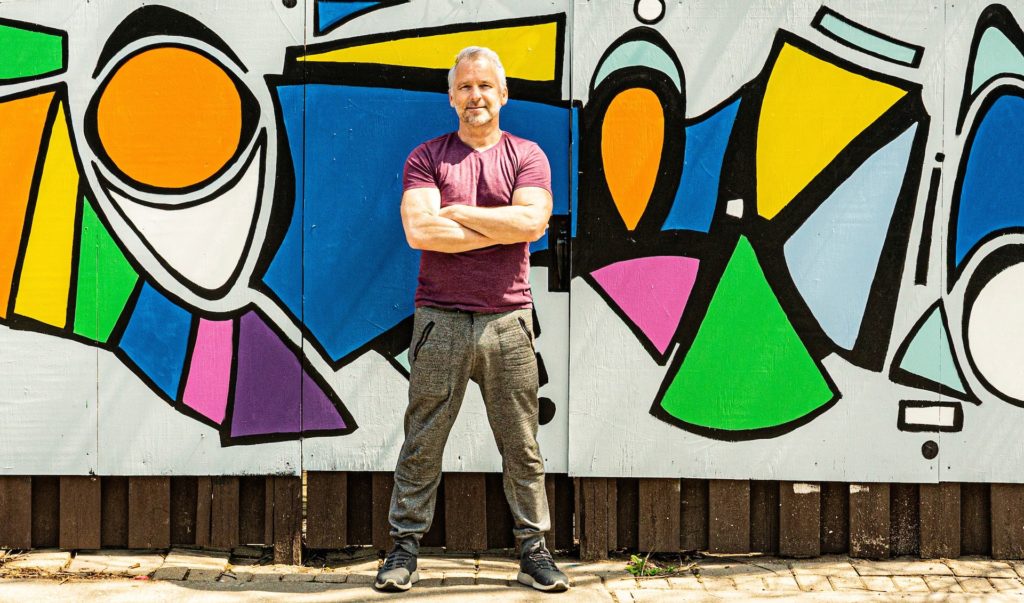 Seeking to spread joy, Canadian contemporary abstract artist, Andrew Stelmack decided to paint a mural at 365 Dundas St. E. Stelmack had never painted a mural before but wanted to share his optimism and good fortune with the community around him. He expected to brighten up the area but never anticipated the reactions to his work that he received.

Pre-pandemic, Stelmack made his living by attending gallery shows, but the pandemic put a quick stop to rooms full of art lovers. He was surprised when sales of his artwork started picking up instead of slowing down.

“Artists like myself are doing very well because our clientele are still working, but they’re not spending money on travelling, or dinner, or clothes or anything,” Stelmack says. “A lot of them are spending on their homes. A lot of people are buying art that they had hoped to buy or are adding to their collections…so life has been good…it’s the exact opposite of what I thought would happen.”

Not wanting to build inventory before retreating to his summer cottage, Stelmack decided to do something that he’d never done before. He decided to turn a large black expanse of a wall into a mural. He pitched the idea to the building’s owner who offered to provide the paint for the project.

“Everyone’s down, everyone’s depressed, so it just kind of hit me that I had the time,” he says. “It’s just my way to give back to the universe for, you know, making my life good so why not spread it. I hope it also encourages other people to hire artists to do this sort of thing. We can make the city look more beautiful and more cheerful and more happy. We can contribute and creating a mural is not an overly huge expense.”

The mural is a collection of rainbows that has a strong significance for Stelmack.

“We’re literally in a storm right now — I’m actually a storm lover in real life — and after a storm there’s often a rainbow, so my thought process was we’re in the storm but we are starting to get near the end of the storm,” he explains. “Let’s focus on the fact that the rainbows are coming..that’s why the rainbow theme came into being, I think it was a subconscious thing and I think I was doing it for myself because it makes me feel good.”

But what he didn’t expect was that his rainbows made everyone around him feel good too.

“My intention was to bring joy and I was there to see it and experience it. As a visual artist, you don’t get to see that,” he says. “You paint something and it’s in a gallery or it’s in a show and it’s gone. So here I was painting this thing and the reactions were non-stop. I had one person who even got off the TTC and said, ‘This is so amazing, I’m nowhere near my stop but I had to see this.’ ”

If you stop by Stelmack’s mural, the artist asks that anyone who visits the mural use the hashtag #andrew_stelmack on social media so he can see how people interact with the painting and see people in front of it.

“I set out to make things better and to share,” he says. “And I got it back ten-fold in ways that I never expected.”