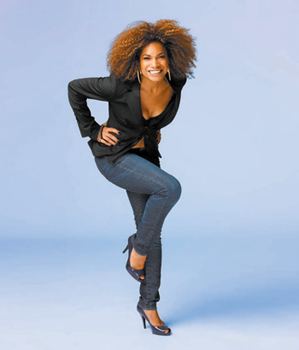 “RECENTLY I WAS backstage at a Victoria’s Secret event, and Martha Stewart was there. She came up to me and was like, ‘Great hair. Can I take a picture?’ I was like, ‘Mmm-hmm,’” says Arisa Cox with a sassy neck bob. “That’s my claim to fame: I am in Martha Stewart’s camera!”

Cox does have a signature mane of curls corkscrewing out of her head, but it’s hardly her claim to fame. This Bathurst and Finch native has already claimed fame as a reporter for The A-List and The Gill Deacon Show; guest host on CBC Newsworld, Studio 2 and Arresting Design; and producer on Entertainment Tonight Canada, Road to Rockstar and Wedding SOS.

But Cox is most famous as the co-host of E! News Weekend (E!NW), Canada’s PG-13 cousin to the evergrowing roster of television celebrity hype shows. A far cry from the manicured glitz of its competitors, E!NW lets Cox get down and dirty with the famous folks she’s interviewing. Whether that means getting drunk with Nickelback or coaxing complete sentences out of hungover Trailer Park Boys, Cox loves the gig.

“The best part about this job is feeling like you are in a constant state of inspiration,” she says. “That’s basically it — having interesting conversations with interesting people.”

But that’s not all. Cox also hits the road for the show, travelling to exciting locations across the country. Recently, she found herself in subarctic Churchill, Man., facing off with two of earth’s most amazing creations.

In Churchill, she was witness to the phenomenon that is the northern lights. “They were just stunning, green and pink and just moving. Basically just God and the universe saying, ‘Hold up, I’m gonna show off for a while,’” she says.

Another highlight of the trip was the chance to come face to face with one of natures most adorable killing machines.

“I also saw the polar bears,” she says. “They are supersmart animals. They are the Mensa crew of the animal world.”

While socializing and travelling are all stellar perks of the job, beneath that Martha-approved thicket of hair is the mind of a gifted auteur. If there were a Mensa crew of entertainment show hosts, Cox would be a founding member.

Growing up in North York, Cox was shy, an awkward wallflower, self-described bookworm and certified brainiac. “I was what you would call an ugly duckling for many years. You get people who reminisce about high school, like, ‘I smoked so many drugs, I had so much sex, and I partied so much!’ Not me. I was in the gifted program. I graduated with a 92 [per cent] average,” she says.

The daughter of Trinidadian immigrants, Cox, along with an older sister and younger brother, was raised by a single mother. At eight, Cox auditioned successfully at the Claude Watson School for the Arts. While it meant a long subway ride each morning, the experience was crucial in creating the media dynamo who exists today.

“It was just such a fertile time for an imagination. They really made you feel like you could do whatever you wanted to,” says Cox, who was classmates with Scott Speedman and an already famous Sarah Polley. “Plus, there was no bullying. My last name is Cox, so if anyone was going to be bullied, it was me.”

While dreams of onscreen fame swirled through the hallways, Cox admits she wasn’t focused on any of that. She wanted to be a novelist.

Like many aspiring writers, Cox parlayed her high marks into a spot at the University of Carleton’s journalism program. Yet again she excelled, but as her course work went on, two inescapable realities set in: writing does not pay the bills, and she was just too darned charismatic not to be in front of the camera.

“Journalism actually derailed me for a while,” Cox admits. “I went [to Carleton] because I loved to write, over and above everything else. I think I psyched myself out, that maybe I wouldn’t be able to be a novelist. I’d have to get a job.” So she did — as an on-the-street reporter for CJOH in Ottawa.

“It kicked my ass. It’s a lot of pressure, and it also showed me what I didn’t want to do. I didn’t want to do hard news, fires and kids getting killed skateboarding.” The realization prompted Cox to switch gears. She moved back to her hometown of Toronto and dove headfirst into the far more upbeat world of entertainment reporting.

“Going into entertainment journalism ticked a ton of boxes for me,” she says. “There is the storytelling element, there is the performance element — you get used to performing. And all of the other stuff is gravy.”

The relocation reunited her with her old neighbourhood in North York where she and her partner have moved and are starting a family.

“It’s an amazing fixer-upper on a massive plot of land. It’s kind of near Cummer and Willowdale. My sister calls me the turtle because I left where I came from and returned to spawn.”

That Cox, who spends her weeks knee-deep in chic, chose to return to the considerably less flashy place from whence she came is a testament to just how down to earth she really is.

“She just doesn’t really buy the hype,” says Jason Ruta, Cox’s cohost on E!NW. “The thing about her is that she is cucumber cool. She doesn’t rev up easily. We were doing our first-ever Gemini red carpet show, and it was exciting and all that, [and] we were all feeding off the energy. She just kept low-key and quiet. But when we go live, she’s on.”

Cox’s ability to avoid getting caught up in the hype probably stems from the fact that she still thinks of herself as the bookish, shy outsider who clung to the walls of Canada’s high school star factory. And it’s this attitude that has given her an edge.

“I hope my kids are late bloomers for that reason,” she says. “You have to see life from the other side. You have to not be hot, like you can talk or charm your way out of life’s real issues. If my kids are really gorgeous early, I’m going to give them the ugliest glasses. I’ll give them no money for clothes.”

All of the above might be a challenge. Cox’s good looks and magnetism coupled with her fiancé’s Persian-Norwegian heritage are bound to produce exceptional kids. Plus their mother may have a decidedly new and more lucrative career in the near future.

The circumstances are topsecret, but this high school writing nerd might just get her revenge, with a writing project of titanic proportions that could vault her from outsider to A-list insider overnight.

“In my downtime I write. I write constantly. I’m a screenwriter, so I’m working on a few really, really big projects.”

The tape recorder is turned off, the notebook is tucked away, and Cox spills the beans. And it’s juicy. Ruta knows about the upcoming project as well and offers this as a clue:

“I’ll tell you what. Arisa Cox is a star. She was born a star, and she’s going to be a huge star. She’s really just using [E!NW] as a springboard. For her it’s all about the writing. She tells me, ‘Jason, one day you’re gonna be in one of my movies.’”