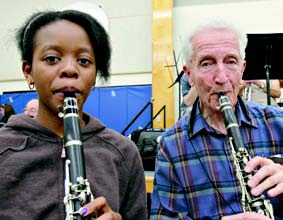 Every week for the past 23 years Bayview resident Dan Blachford has had a standing date with the Encore Symphonic Concert Band. Here, he donates his time and talent playing clarinet with the non-profit organization of retired musicians who mentor young music students and raise money through their concerts for local churches, hospitals and charitable organizations.

But don’t call this 91-year-old retired teacher a “hero.” “I want to stay away from what they call ‘the limelight,’” Blachford says humbly. “The hero here is our whole band and our conductor, John Liddle.”

Started in 1986 by a group of Toronto Musicians’ Association members, Encore is a traditional concert band with woodwinds, brass, percussion and string bass.

Today the band has approximately 55 members, and around 35 turn out regularly for their weekly practice. Though Blachford prefers to remain behind the scenes, his passion for music making is clear. He has been with Encore since its inception and is now the oldest member of the diverse group of players, who boast an average age of 74.

“I was there from the beginning, and I am the eldest by about two years,” says Blachford. “We sounded pretty awful in the beginning, when it was just a collection of happy guys. But as the word got around, we had some very talented people come our way.”

“In all those years we’ve played, we’ve never really had a bad concert,” says Blachford. “We play a whole range of music, and we’re good with jazz — what they call the big band jazz. We’re very happy doing it, and our main reason for playing is just to have fun and entertain our audiences.”

With no signs of slowing down, Blachford says the band is open to invitations to play at local community events, and as each year passes, he relishes the opportunity to continue making music and spending time with his talented bandmates.

“My best friends really are in this group, and there’s not a sourpuss in the bunch,” he says. “I know it will go on long after I’m gone. They say nothing is forever, but it’s going to go on. It’s wonderful, absolutely.

The Post salutes Dan Blachford and all the Encore band members for making a difference in the lives of local students.