Are stacked townhomes the new condo in Toronto real estate? - Streets Of Toronto
Skip to content 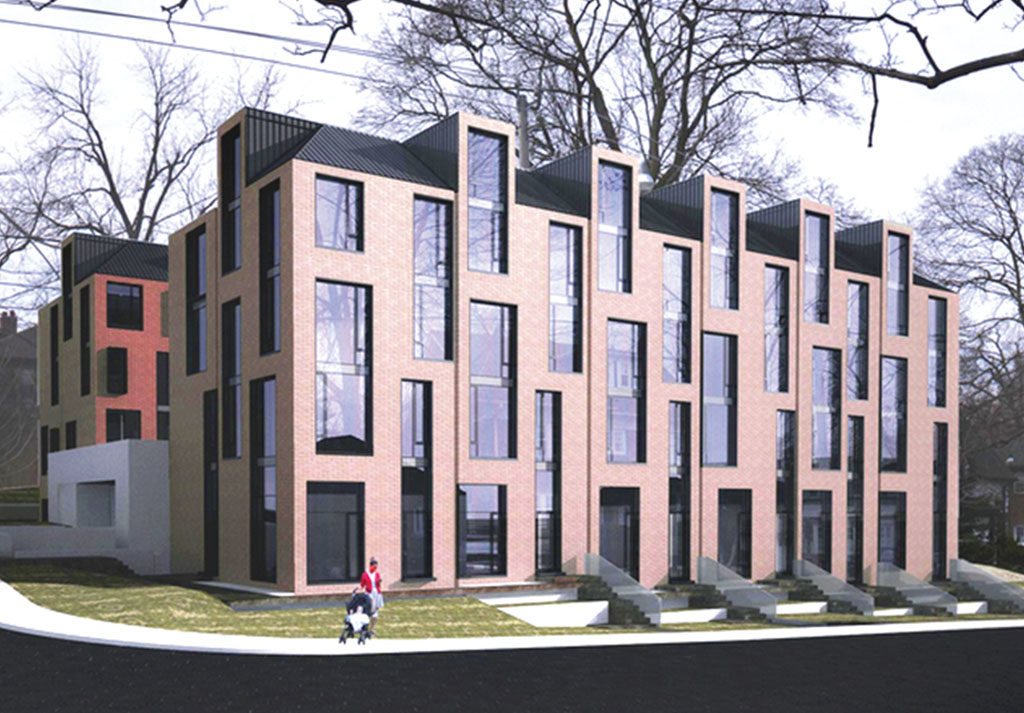 If you can’t build it, stack it. Or that’s what a land developer might plan to do.

With very little truly available space left in the city, developers continue to find new ways to build up within small spaces in Toronto. Enter the stacked townhome: the latest trend in real estate in the Greater Toronto Area, which has entered many neighbourhoods across the city.

Several more are slated for Midtown.

On the surface, stacked townhomes appear to work with a variety of problems that include zoning restrictions on height and density that prevent large condos from being constructed, while creating new property within highly sought-after city space. But they also create concern amongst residents and local councillors who say they are not an appropriate solution for all avenues and can ruin the integrity of the neighbourhood where single-family dwellings have long been the norm.

“People are outraged. There are fears about density creep, but with these townhomes it’s more about block patterns. This is about respecting the neighbourhood, and the level of frustration [from residents] has hit a ceiling,” said councillor Jaye Robinson.

Areas such as Regent Park and Liberty Village boast these kinds of builds as being great options for first-time buyers and young families.

As buying a detached single-family home in Toronto has become little more than a pipe dream for many people, this can be a solution for some willing to forfeit the freedom of a quiet street and a backyard. Prices begin in the low-range for Toronto — often around $500,000. But there is no mistaking these big-build communities.

In Midtown — an area constructed largely of single-family detached houses (with price tags starting at $1 million) and green space — residents are facing multiple development proposals that will continue to change the very nature of their neighbourhoods.

One proposal was recently submitted to Toronto City Council that would put in 22 stacked townhomes at 84 Weybourne Cres. and 51 Lawrence Ave. E. on a site that formerly was three residential lots.

Janet Griffin of the Lawrence Park Ratepayers’ Association described the development as being similar to a mid-rise condominium. “To call it anything other than that is utterly disingenuous,” she said, for an August article for Post City.

“The neighbourhood is alarmed, specifically to the development at Keewatin where the community is very concerned, as are the planners, about the impact on the block pattern, setbacks and green spaces, which are basically non-existent,” Robinson said.

Trolleybus Urban Development is planning to build stacked townhomes at 200 to 214 Keewatin Ave., but the original proposal faced scrutiny at city hall.

The developers have appealed to the Ontario Municipal Board (OMB), where it is possible they will receive approval to move forward.

“In terms of what the applicants are proposing, there are a number of issues I have flagged that need to be addressed,” City of Toronto planner John Andreevski said.

According to the preliminary report for this build, those issues include everything from storage and waste pickup to the appropriateness of the proposed height and density as well as the landscaped open space and tree preservation.

The Keewatin proposal is typical for what a stacked development brings to a neighbourhood: multiple units stacked one on top of another where one once stood.

A similar influx of developments is taking over Bayview Avenue from Lawrence Avenue right up to Highway 401. Most single, detached bungalows that used to line Bayview are either being put up for sale or have already been sold to developers.

“It’s not just that they are townhomes; it’s that [the developers] often want to build them with far further rear setbacks and taller. The valid concerns residents have is the impact on the quality of life for the neighbours and the impact on the street,” Ward 22 councillor Josh Matlow said. “The vast majority of the stacked townhouse complexes we’re seeing built in Midtown don’t follow the current zoning bylaws, and that’s why the developers will frequently go to the Committee of Adjustment to build them.”

Although the Committee of Adjustment is often referred to for the smaller issues that stacked townhomes might pose (compared to large condo buildings), developers can still appeal to the OMB and totally usurp city hall.

Matlow and Robinson both argue there would be huge benefits for Toronto if city hall could detach from the control of the OMB.

Although the city’s official plan promotes medium builds across the GTA in order to accommodate a growing population, Matlow pointed out this is intended for larger streets in the city, where it is appropriate, and not smaller residential streets.

“It doesn’t mean that every local street should see their entire character change. It is referring to the larger avenues in the city that can sustain that growth,” Matlow said.

But the reality is that Toronto is changing and growing, and experts believe this kind of development will continue to grow in most urban neighbourhoods. According to recent Statistics Canada data, the Greater Toronto Area is expected to reach 9.1 million by 2036.

“There is no green land left in Toronto. It’s a fixed-boundary municipality that can’t grow. Any growth that continues must take place within the city, so you are directed toward something where something already exists and finding a way to grow more there,” said George Dark, a partner at Urban Strategies urban design and planning firm in Toronto.

He pointed to the GTA as having some of the most desirable neighbourhoods in Canada, with a lot more people wanting to live in the centre of the city and surrounding areas than it currently has the capacity to accommodate.

In 10 or 20 years, Dark believes we will see more development on main streets but also in residential areas.

Without having full control over development in the city, there is very little the city can do to stop medium-sized developments moving into where single homes now sit.

“Our neighbourhoods are in a first run of development, going through the next round of development. Many people are taking down houses and building new houses, and often there is the phenomenon of one down two up or multiple or quads,” Dark explained.

He points to stacked townhomes as being a solution not only to limited space, but as being the future of the city.

It’s a space game — feeling a bit like Jenga — but it is also a numbers game, and as we move well past our first round of development in the core of the city, Dark said the need for invention will increase.

“Our growth could be quite spectacular,” he said.