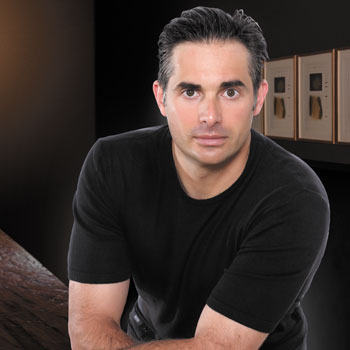 AT THE WANING end of his thirties, when other middle-aged men are dreaming of quitting their jobs and buying choppers, Anton Rabie had an epiphany.

Waking up one day, the thought of being a millionaire, winner of an Ernst & Young Entrepreneur of the Year award (in 1999), co-employer of around 900 people worldwide and president of a company that’s now bringing up the rear of a North American toy-triumvirate led by the indomitable Hasbro and Mattel seemed, well, slightly cursory. And along came Rabie’s latest passion: philanthropy.

“In my twenties, I was just incredibly intense and was all about growing the company and focusing on myself,” he says. “One day I woke up, and it was almost like flicking on a switch, like the day when I had a child. I said, ‘It’s time for me to begin the second half of my life, which is all about giving.’”

Those who know Rabie intimately — many of whom happen to be conglomerated in Thornhill, where he spent a good chunk of his formative years — say that he’s never been one to meander when he sets his sight on a task. A humanitarian-oriented Rabie could very well fatten the coffers of his chosen causes with the effectiveness of an altruistic cyborg.

He is, after all, an efficiency machine. He’s a fanatical, obsessive delegator.

He’s able to break down the structure of his weekdays with mathematical precision: “My mind engages from the minute I wake up,” he says. He’s out of bed at 6:30. Checks emails. Has breakfast of steel-cut oats with blueberries or 10- grain pancakes with eggs. Weights, cardio or tennis for an hour (loves tennis; he’s got a mean forehand, heavy on the topspin).Works from nine until six. Eats constantly: four small meals throughout the day, plus dinner. Takes phone calls on the commute home. Puts the Blackberry away. Spends two hours with his daughters.Takes the Blackberry back out. Goes to bed, always on an empty stomach, for health reasons.

He likes to break things down into percentages and numbers. He hasn’t watched a television show in 21 years.

He watches one movie per year (two thumbs up to Slumdog Millionaire).

Fifty per cent of the time, he’ll work a second mini-shift from home in the evening.

Twenty per cent of the time, the slings and arrows of managing an empire mean he’s too distracted to be totally in the moment during his allotted weekday daughter-time.

He has three, count them, main passions: parenthood, exercise and charity. “I only do a couple of things,” he says, “and I try to do them well.”

And as a youth, Rabie worked out compulsively, often flexing wistfully in the mirror in search of results. He was remarkably tiny until around the age of 18, smaller than most of his classmates, which made him ambitious, his brother says.

That ambition was always readily visible in his earliest entrepreneurial efforts.As a teen,he sold lamps at a local flea market and sold fertilizer, lots of fertilizer, door-to-door around his Thornhill neighborhood.

He was himself born to a Jewish family in Cape Town.

When he was seven, he and his family left their affluent lifestyle in South Africa to escape apartheid (his father,a well-to-do clothier, was almost shot during a riot and decided enough was enough).

Rabie was fourteen when the family headed to Thornhill.

There, he would play tennis, sell things and hang out with other South African newcomers, going for walks in Thornhill’s parks or taking them to parties.

One such émigré, Jonny Varkul, is now one of Rabie’s closest friends. He recalls being immediately struck with Rabie’s disciplined intensity.

As an outgoing, socially adept youth, Rabie partied the way he worked: with purpose. Going out on the town, he always made sure to dress with exact appropriateness for the particular club he was going to,arriving at the club at an exactly appropriate time. “Because that’s what we were doing, we were focusing on that,” reminisces Varkul, who used to tag along. “Focusing on how we could extract the most utility from that particular event.”

When he isn’t focusing on his work or being a parent, Anton now focuses on charity. Of particular interest to him is autism. He sits on the board of directors at Autism Speaks Canada.

He raised over $135,000 for a Dancing With our Stars event this month, the proceeds going to Baycrest’s Centres for Innovations in Aging.

At the event, happening November 4, he will dance in front of judges and an audience, despite, by his own admission, being of the double left-footed breed. But he’s not one to shy away from a challenge.“I like to tackle things that require heavy lifting,” he says, in his strangely appealing mechanized way.

In the meantime, Spin Master continues to grow exponentially. For the past five years, it’s grown about 20 per cent per year.While Rabie won’t dish on his company’s annual revenue, in 2009, Businessweek pegged it at over $700 million.

A recent venture into girl’s toys, a notoriously difficult market to crack, has proven successful.

And, according to Rabie, Spin Master is expecting one of its latest enterprises, a series of collectible, ridiculously cute fantasy animals known as Zoobles, to bring in tens of millions this Christmas.

With Rabie doing his thing, Spin Master’s two other co-founders, long time pals Ben Varadi and Ronnen Hararay, have little reason to expect a premature end to the success. It doesn’t take an epiphany to realize that.