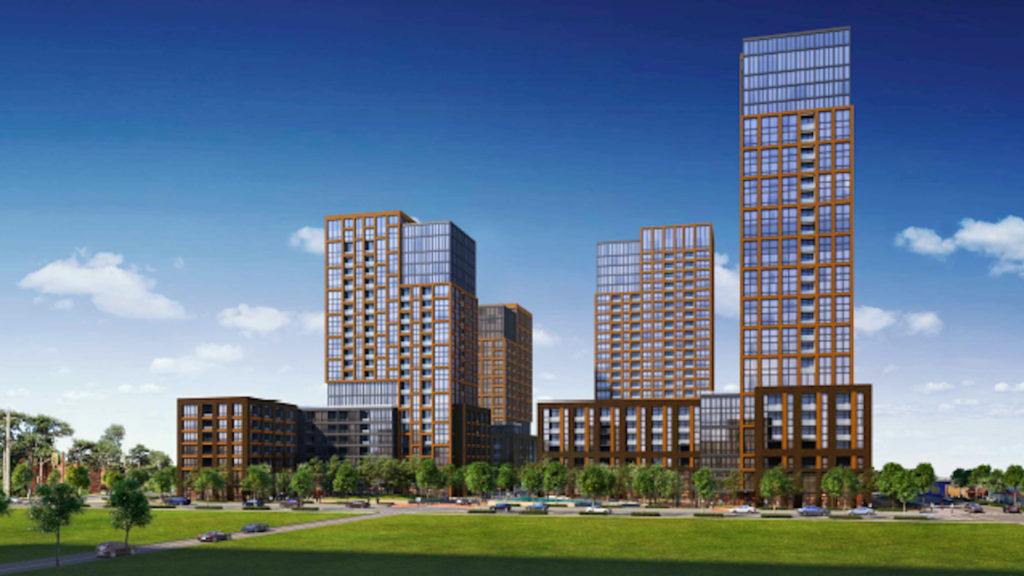 The site, which is on the route of the Crosstown Eglinton LRT, housed a long-time Staples store, as well as a piano store, and other retail amenities.

Already, the application has caught the eye of local city councillor Jaye Robinson, in whose ward the development site is located.

“While this application was only submitted a few weeks ago and is at the early stages of the City’s planning process I am very concerned by the proposed tower heights,” said Robinson.

The development application includes room for 937 parking spaces for residents, visitors and commercial patrons are provided in a two-level underground garage. There is also an off-site public parkland dedication and westerly expansion of the existing public park (Leonard Linton Park) to approximately Aerodrome Crescent adjacent to the redevelopment site on the south side of Vanderhoof Avenue.

The development will require both an official plan and a zoning bylaw amendment. Robinson said, the properties are also subject to the new Laird in Focus Secondary Plan, which city council approved two years ago. She said, Laird in Focus anticipates maximum heights of 12-16 storeys for the site.

“Despite the clear policies in the place, all but one of the proposed towers in this application exceed the maximum permitted height, ranging from 16-28 storeys,” said Robinson. “It’s frustrating to see developers continue to disregard new municipal planning policies. This approach is not conducive to good planning and does not respect the efforts of city staff or the community members who put countless hours into developing a comprehensive, community-based plan for this fast-growing area of the city.”

On the opposite side of Brentcliffe to the new proposal, Diamondcorp’s mixed-use development contains three towers with another six towers that are part of the redevelopment of the 8.8-acre site on the southeast corner of Laird and Eglinton.

The developments will bring thousands of new residents to Leaside.