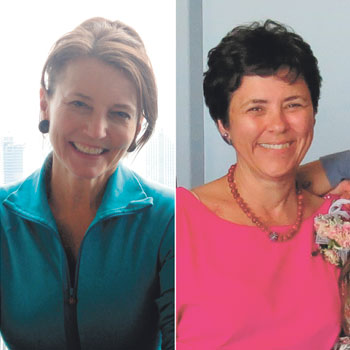 Inspired by two local mothers, a gala event aimed at raising awareness for early-onset Alzheimer’s disease across a young demographic has raised $35,000 for the Alzheimer Society of Toronto (AST).

Jane Holland-Poirier and Patricia Fudurich, residents of the Yonge Street and York Mills Road area, were both diagnosed with early-onset Alzheimer’s disease in their 50s. Seeing its effects on their mothers’ lives, daughters Carolyn Poirier and Kathryn Fudurich became determined to help support others coping with the disease. With the help of other local volunteers, they organized the now-annual Memory Ball, held last month.

There, attendees were encouraged to write a message of support to honour a loved one with Alzheimer’s.

Tickets to the event, featuring drinks, dinner, dancing and a silent auction, sold out, and the amount raised after expenses far exceeded the ball’s inaugural $21,000 contribution. Last year’s inaugural event sold out as well.

In 2010, two years after her mother was diagnosed, Poirer approached Katherine Andrikopoulos, a family friend, about mounting an event fundraiser. With other friends, they approached AST and corporate sponsors with their own ties to the disease to create the gala.

“The disease is something that many people deal with, but it’s not spoken about as much as other terminal diseases,” said Andrikopoulos. “We feel positive about drawing the much-needed attention and funds to ATS.”

According to her, plans are already underway for Memory Ball 2014 and the volunteer team is growing. Memory Ball expects to showcase various perspectives and stories on the disease — to continue educating young adults about its impact — soon to be available on its blog at www.memoryball.org.