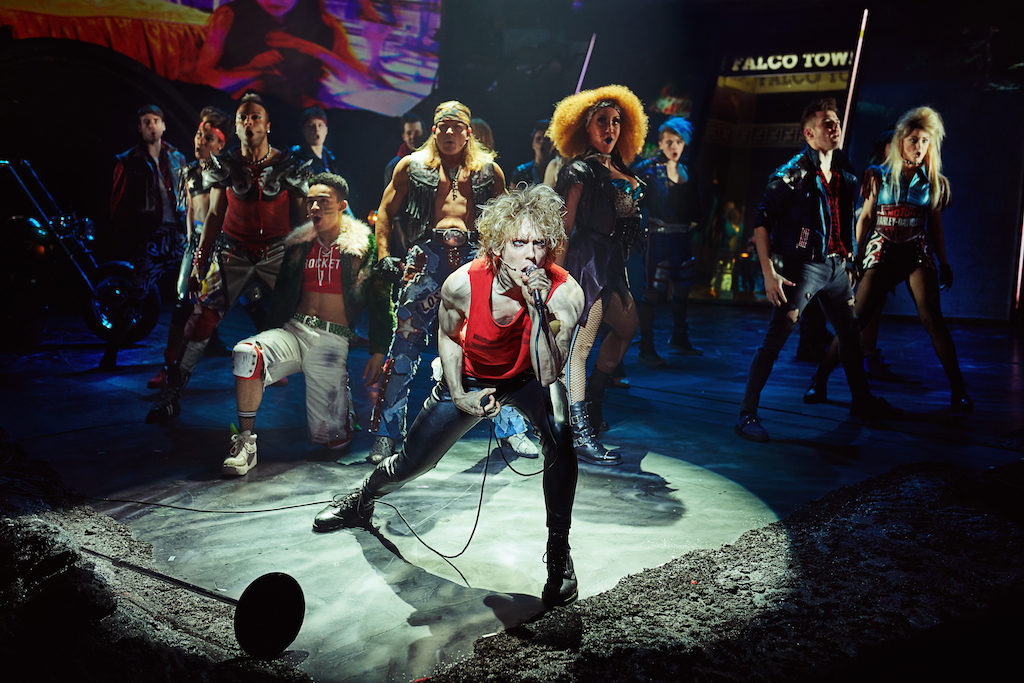 Bat Out Of Hell: The Musical returns to Toronto for a short three-week run at the Ed Mirvish Theatre.

The musical production features rock legend Meat Loaf’s most iconic hits including “I’d Do Anything For Love (But I Won’t Do That)” and “Paradise By The Dashboard Light.”
Typical of a rock ‘n’ roll musical the plot involves young love and some sort of tyrannical overlord who is a total buzzkill.

Back in the lead is the fiery and talented American actor Andrew Polec, who has wowed audiences and critics alike for his bold performance. He won the Joe Allen Award for best West End debut when the showed played at the London Coliseum in 2017.

Post City caught up with Polec and asked him about the show and coming back to Toronto.

Happy to be back in Toronto? What do you enjoy about the city?

I love everything about this city. I am so thrilled to be back by popular demand. A personal favourite is the EdgeWalk at the CN Tower. I am terrified of heights and yet I felt like it would be amazing to put my fear to the test. I went up there and decided to sing a little “Bat Out Of Hell” from the top of Toronto. It was wild.

You’ve been playing this role for a while now, what keeps you interested and ready to rock?

The audiences are what keep me coming back for more. Every time we step on the stage we are met with a huge burst of energy from the crowd. We give our sweat, our blood, and our love and they give it back twofold or even threefold. It’s a love fest — a celebration of humanity with beautiful music by Jim Steinman and Meat Loaf. It’s the role of a lifetime and a story for all ages. I’m so grateful. Who could ask for more?

What first attracted you to the role, and were you familiar with the Meat Loaf?

I fell for Meat Loaf and Jim Steinman’s music back when I was a teenager. I was originally a lacrosse player and was going down the route of a sporting life. That all changed when I got into a terrible bicycle accident that put me in the head trauma unit for five days (always wear a helmet). Coming out of the hospital, the doctor told me that I couldn’t do contact sports any more. I was lost and didn’t know what to do with my life until my dad played me “Paradise By The Dashboard Light.” I was completely blown away by Meat Loaf’s performance on the album and Jim Steinman’s witty lyrics. It pushed me down the rock and roll path and when someone told me during a Spongebob audition that Bat Out of Hell was auditioning right down the street, I knew I had to go and give it my all.

Meat Loaf was involved originally, at least in a promotional capacity, what was that like?

Meeting Meat was like meeting the Godfather of Rock n Roll. I fist met him in a limo going to the Q Music Awards in England. It was thrilling to be in the same car with him and when I told him that he was a true rock star and a legend and that I idolize him. He stopped me in my tracks and said, “I don’t like to be called a star or a legend. I’m just an ordinary guy, a regular human being that wants to connect with people through love.” He was so humble and sweet and gave me so much advice on how to sing these incredibly challenging songs. I’m grateful for Mr. Loaf’s love and support of the whole show.

What’s the highlight of the show, for you?

Ending with the mega hit “I Would Do Anything for Love (But I Won’t Do That) is always a joy for the whole team. It has audiences singing along and ends the show with such a heartfelt BANG.

What are you hoping people take from attending the show?

We always want people to leave feeling loved. No matter who you are, you are special and a shining person in this beautiful world. Rock out.

How did you develop such good chemistry with your co-star Emily Schultheis?

It started on the first day like an explosion of the heart. During the first rehearsal, we rocked out on the same wave length and it’s been grooving ever since.

What do you find most challenging and rewarding about the role?

The stamina is the biggest challenge. The whole cast is running a marathon with their voices and their bodies. We are all sweaty, hyperventilating messes by the end. I have no idea how Meat Loaf did all the songs. We split them up among the whole cast now. He is a true Vocal Olympian.

What can audiences expect from the show?

For people who saw the show last year, this version has new scenes and new characters. Overall, you can expect a visceral experience of love and rock and roll that will touch you to the core of your soul and have you dancing in and eventually out of your seat. It’s a real adventure. Join us and sing along!