Restaurant’s patio yurt almost gets nixed by city inspector, giving manager a run for his money - Streets Of Toronto
Skip to content 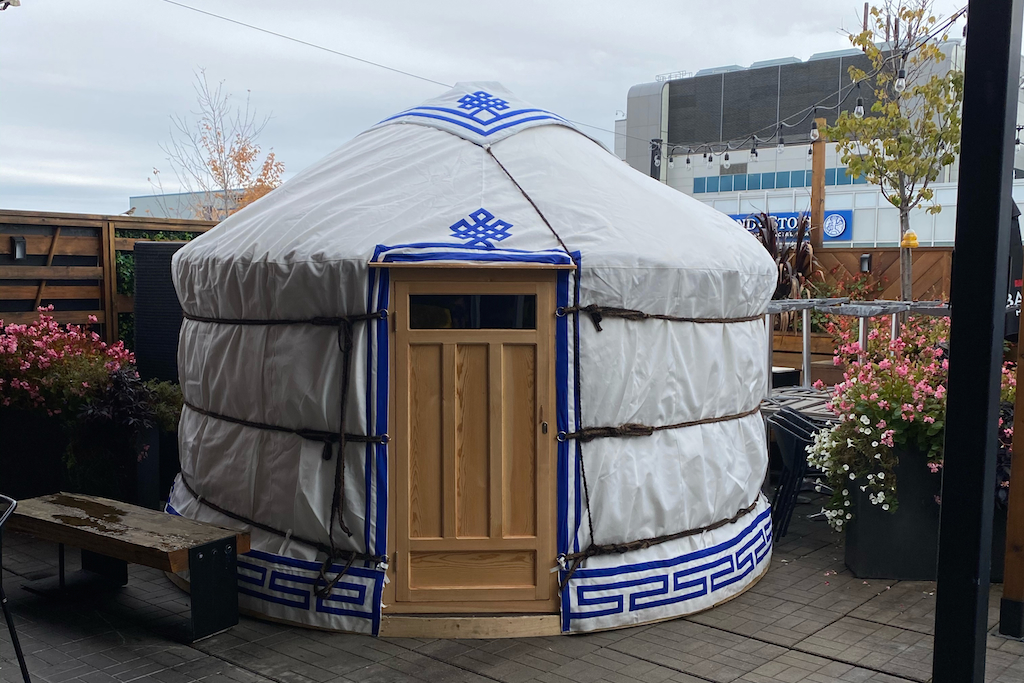 With modified stage two restrictions still in effect, Toronto restaurants are getting creative in a desperate attempt to keep their businesses afloat during the pandemic. General Manager of Amsterdam Barrel House in East York, Matt Peacock says that based on the recent encouragement of Mayor John Tory to “get creative” with outdoor dining setups, their team invested $11,000 in an outdoor dining yurt set to launch this weekend and give the business a much-needed boost in revenue.

Peacock says when designing the six-person yurt, the team made sure to closely follow the guidelines on the City of Toronto bylaw website, which meant making sure to include two open panels in the form of a vented roof cap that can be removed and a door wrapped in sheepskin. The team started marketing it on social media and received a large volume of demand within 24 hours.

At $400 per party, the yurts should generate at least $3,200 in revenue for the restaurant this weekend. However, when the health inspector came to review the yurt yesterday, Peacock says the plan was almost put to an end before it could even begin.

“The health inspector comes in yesterday, comes out and looks at the tent and says ‘I don’t know,’” Peacock says. “He says let me call my supervisors, then while on the phone shakes his head ‘no.’”

The inspector cited a rule that wasn’t listed on the bylaw website—the openings had to be open 75 per cent and Peacock’s yurt apparently did not meet this guideline. He says the inspector was unable to highlight this specific detail in the guidelines because it’s still a matter “in front of the house.”

“This is make or break for this restaurant—my sales will be chopped by about 45 per cent if we can’t go ahead with the yurt,” Peacock says. “Right now, the government and public health agencies are completely out of alignment. It’s an absolute challenge.”

After a stressful and confusing 24 hours for Peacock, Premier Doug Ford made a statement today during a press conference, encouraging restaurants to make use of the outdoor dining bubble structures.

“It’s not the full solution but it’s another tool they can use we got that approved through our health table,” Ford says.

Peacock is relieved that Amsterdam will be able to go ahead with the yurt after all just in time for the weekend.