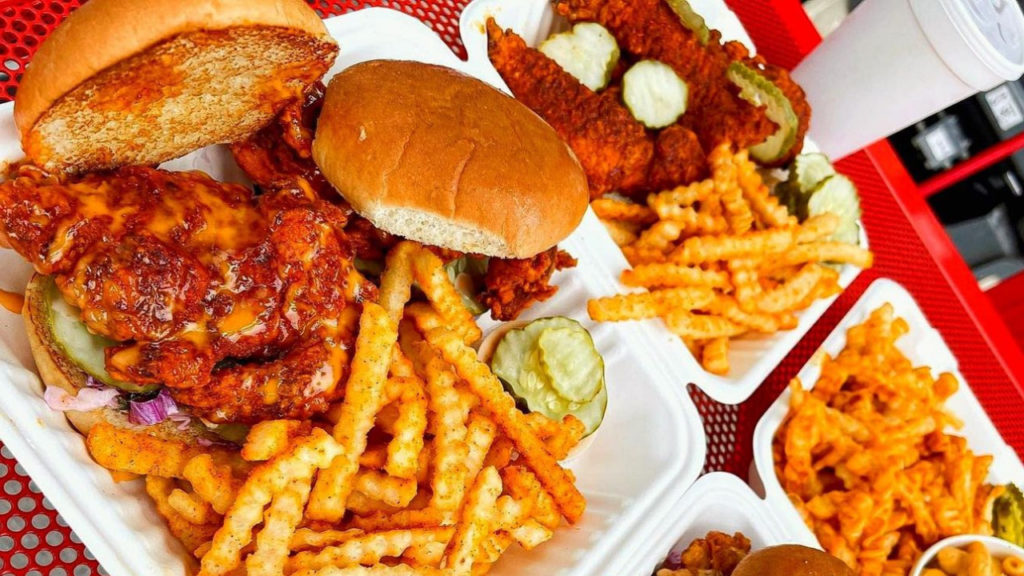 A fast-growing American fried chicken chain that was brought into Canada by the founder of the Toronto Raptors is opening a new location in Leslieville. And, just like the Toronto locations before it, it’s brought along scrutiny from the surrounding community – this time before opening day.

Dave’s Hot Chicken, the California fast food restaurant specializing in spicy southern-style chicken, will soon be opening its third location in Toronto – something that has seen its fair share of contention. The eatery’s first foray into the city last year also brought its own concerns.

The first location of Dave’s opened where Pete’s Corner Grill (located at 1582 Queen St. W.) once stood. That spot, a neighbourhood staple, was known for wallet-friendly and filling breakfasts but was forced to close down at the end of October after nearly 12 years. The brand flagship Toronto location opened during the pandemic and saw massive lineups around the block during opening weekend, causing Parkdale locals to question the COVID safety measures the company was taking.

Their grand opening today. The photos of inside are worse. A crowd inside too. No distancing. No masks. Like, who would eat there? It's been reported to City Health by multiple neighbours. pic.twitter.com/qHLaCNdCPV

Local residents also criticized the family funding the expansion of the brand into Canada; John Bitove, founder of the Toronto Raptors, partnered with Dave’s along with his daughter Blair Bitove to open the new Canadian locations.

Dave’s Hot Chicken that opened up in parkdale (replacing Pete’s corner grill) is owned by some wannabe influencer with a rich daddy and they apparently threw a huge private opening party this week lmao ew this is the worst. #toronto #gentrification

Though the second Dave’s location, near Yonge and Davisville, opened with little fanfare (aside from those craving some hot chicken), this soon-to-open location at 1130 Queen St. E. is not without its detractors. The fried chicken chain will be replacing Stratengers, a neighbourhood pub popular with locals that closed after 32 years in January 2021 when the owners decided to retire.

Those unhappy with the news of an impending Dave’s Hot Chicken took to social media to air their concerns, with a lengthy comment chain popping up in the “I am a Leslievillian!” Facebook group. While some were happy to welcome the new business to the neighbourhood, others lamented the loss of a longstanding staple and wondered if Leslieville was losing its charm.

“Our stretch from Carlaw to Leslie has lost way too many great locally owned businesses that gave us an awesome vibe, and they are being replaced with Corporate or Cannabis operations,” one commenter wrote.

At the time of writing, the franchise did not respond for comment.

The American chain announced plans to branch out of the U.S. with 30 Canadian locations, starting in British Columbia and Ontario. Dave’s Hot Chicken partnered with Toronto Raptors founder John Bitove for the expansion into Canada. Bitove’s daughter, Blair has taken on the role of director of business development.

The concept for Dave’s Hot Chicken comes from best friends Dave Kopushyan, Arman Oganesyan and Tommy and Gary Rubenyan. What started as a parking lot pop-up in east Hollywood in 2017 has quickly grown into a franchised brand with locations throughout California as well as in several other states.

The California-based brand is known for its spicy and crispy chicken with an extra-fiery kick thanks to the bold blend of spices and hot sauces. Each piece is topped with a mix of signature spices, ranging from “Mild” to “The Reaper.”

It remains to be seen whether Leslieville locals will fully embrace Dave’s once it opens, but for now, the hot chicken chain isn’t going anywhere.