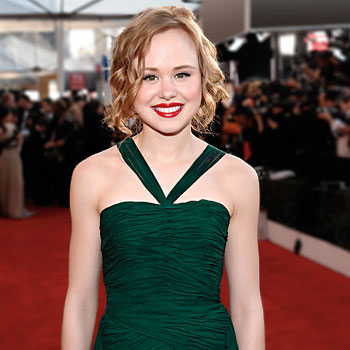 ALISON PILL WAS 10 years old when she decided she was going to be an actor.

It was a feeling that blossomed on the Toronto set of the martial arts TV series Kung Fu: The Legend Continues (it’s the thought that counts here), when the young thespian worked for the first time as an extra. From a young age, Pill had stars in her eyes.

Her mother, however, was worried that she saw it more as fun than hard work. So she got Pill and her older sister onto the set to show her that acting was first and foremost a profession.

“So we would be prepared for the long hours,for how boring it was,you know,how silly the whole thing really is,” recalls 24-year-old Pill.“What she didn’t recognize is that I would fall in love so completely.”

Pill, who stars in the upcoming Toronto-based comic book movie Scott Pilgrim vs. The World, has also acted in Broadway plays and appeared in such films as the Academy Award–winning Milk.

But it might not have happened for the rising star if she had grown up anywhere other than Toronto. Pill discovered at an early age that nursing an acting bug and acing Grade 4 is more than most kids — and most grown-ups — can manage.

That’s when she auditioned for the Claude Watson School for the Arts, the North York intensive arts program. It was a free arts education Pill doubts she would have gotten had she grown up in New York, where she now lives.

And if she hadn’t grown up in North York, she may not be where she is today. Which is,in case you hadn’t noticed,a lot of places. “It’s one of those great things about Toronto,” Pill says about her stint at Claude Watson.

“Living here now, I don’t know of that many other programs that are so public and so available for specific needs.”

By the time she was ready for high school, Pill’s busy schedule was filling up with commercials and TV shows, and she attended a few schools before settling in at the right place.

She found it at Vaughan Road Academy, in Toronto’s Cedarvale area.

There, Pill enrolled in the Interact program, which is designed for students with outside commitments in dance, music, theatre and athletics.

“Until I found Interact, it was really hard to get through the system,”says Pill.

“So much depends on attendance. Even if you can do the work,you lose marks for attendance. So trying to make compromises at school is really hard.

“The whole program was amazing. It would have been impossible for me to pass high school without it.”

And that she did, straight into the arms of the New York theatre world. It was on those grand stages where she honed her much-lauded skills alongside such heavyweights as Edie Falco, with whom she recently completed a twowoman show; Jeff Daniels, who costarred with Pill in the acclaimed drama Blackbird; and even Little Miss Sunshine herself, Abigail Breslin, in The Miracle Worker on Broadway.

In the meantime, Pill has also rubbed shoulders on celluloid with Steve Carell, in the comedy Dan in Real Life, and played lesbian campaign manager Anne Kronenberg to Sean Penn’s Harvey Milk in the 2008 biopic, a role that earned her a place on the list of “Five Attention- Getting Turns”in the New York Times.

On the horizon is the August 13 release of Scott Pilgrim, the muchanticipated adaptation of the comics by Canadian Bryan Lee O’Malley, which also stars hometown boy Michael Cera.

That film, about a 22-year-old slacker who must fight seven ex-boyfriends to win the girl of his dreams, was directed by Edgar Wright, of Shaun of the Dead fame, and filmed in Toronto last spring and summer.

Pill says it was refreshing to act in a movie that actually takes place in Toronto. “Toronto is a fantastic city, and I’m hoping this movie will really prove that to other people who just think it needs to be secondary to New York or another American city,”she says.

“It was so nice to be able to shoot in Toronto and actually have the CN Tower in the background and not be, like, setting up fake New York taxi cabs.”

With all of that, elfin-faced Pill, who looks a bit like fellow Canadian actor Ellen Page, could be on the verge of a mainstream breakthrough.

Not that she’s too concerned about it. “I don’t really think about it that much. I just kind of let it come, which seems to be working so far,”she says.

If Pill sounds like a quintessentially unfettered Canadian, it’s probably because she is. She grew up in quaint Rathnelly, a three-block neighbourhood north of the Annex near De La Salle College,where her parents (non-showbiz types) still live.

While she briefly considered going to university, an ambitious Pill couldn’t put her dreams on hold. At 17, she went to New York to perform in her first play, None of the Above and officially moved to the city a year later. She was nominated for a Tony Award in 2006 for her performance in Martin McDonagh’s The Lieutenant of Inishmore.

Pill credits her work in theatre with helping her make the transition from child actor to adult professional.

“It’s the best training you can do as an actor, I think. You know, when you’re a kid, it’s just something you do, you don’t really have to think about it too much? And then I realized I wanted to treat it more as a craft, as something that you improve upon and kind of build your life around,” she says. “Once you make that choice, it’s important to train yourself, and because I didn’t go to school, I wanted to take advantage of as much training as I could. And what better training than theatre.”

Her experience onstage may be the reason why Pill, who looks to Cate Blanchett as a role model, can seemingly play anyone. In Scott Pilgrim, for instance, she is almost unrecognizable as shaggy-haired Kim Pine, “a caustic drummer” in Pilgrim’s band who once dated the title character.

Pill describes her experiencing filming Pilgrim as “a blast.”

“My friends were in Toronto. I got to show them around the city,” she says, matter of factly. On the agenda were Jays games, some un–New York–style veggie dogs and lots of dinner parties on her Annex terrace. One of the highlights on the set was drum lessons from Sloan’s Chris Murphy, who taught Pill how to wield her sticks like a pro.

“I was like, ‘Oh my God, this is amazing,’” she says. Pill also hung out with members of Toronto’s Broken Social Scene, who contribute to the movie’s soundtrack.

Another high point was working with Cera — a master of the awkward pause — who played Pill’s brother in a movie almost a decade ago.

“He’s so talented. He’s kind of a Renaissance man,” she says. “He plays beautiful music, writes great stuff and is a fantastic performer.”

Pill is also reunited with another former co-star, McAdams, in the Allen film,supposedly called Midnight in Paris.

The two played best friends in the 2002 Canadian film Perfect Pie. Pill admits that, with all the goings-on in actors’ lives, she doesn’t keep in touch with her fellow Canadians all that regularly.

But when their paths cross,it’s just like coming home.

“When you see them again later in time, it can be like a family reunion,” she says. “You know, people that you don’t need to see all the time, maybe once a year? There’s just some big connection that draws you together.”