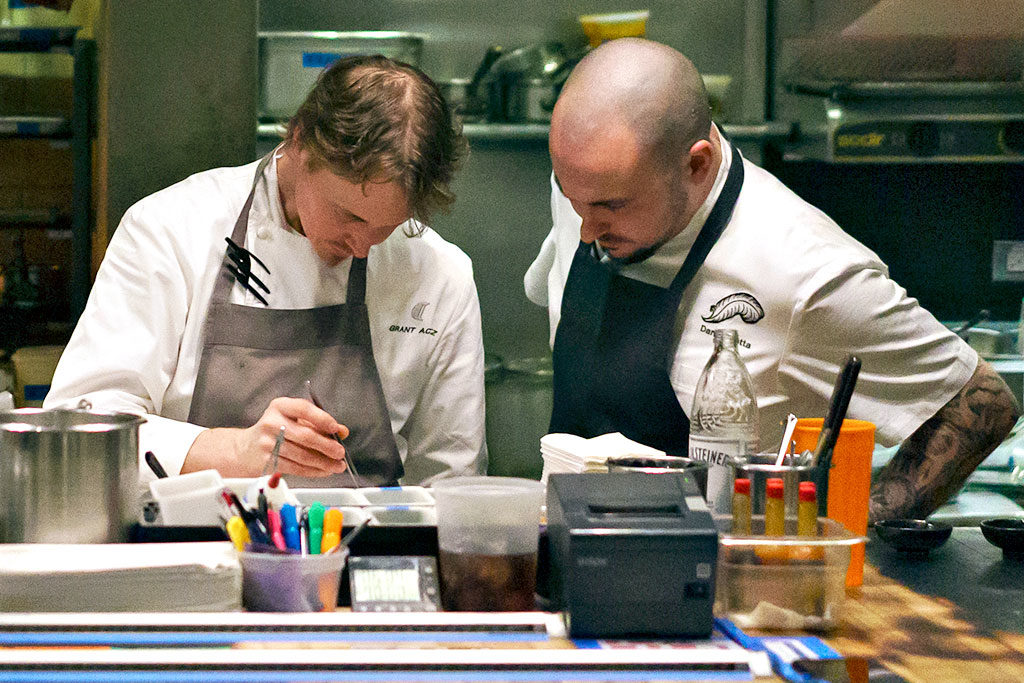 Dan Perretta has wanted to be the greatest since he first started cooking. And he is well on his way. During a bout of shoptalk he may precede any mention of his current boss, Grant Achatz, with the words, “one of the best chefs of his generation” with no hint of exaggeration.

As a teenager, Perretta spent his summers working at his uncle’s restaurant in Richmond Hill — Ponte Vecchio, a stalwart of the 905 food scene.

Now, he’s the executive chef of Michelin one-starred Roister in Chicago, an à la carte restaurant in the Alinea Group of restaurants. At Roister, he’s playing with fire — literally. He’s hanging bananas around a hearth in the middle of the restaurant, which will produce a sweet, smoky, creamy nectar accompanying ember-infused brown butter ice cream for the restaurant’s play on a classic banana split. And they’re smoking fish carcasses for up to 18 hours to make a crystal clear one-bite dashi course.

After working with Grant Achatz for the better part of the last decade, Perretta is now an ambassador for the brand best known for manipulating food to its most playful, often unrecognizable but always awe-inspiring form.

“I’ve never cooked over the hearth like this, but I think that six or seven years of thinking outside the box at Alinea has allowed me to work closely with chef Achatz on how do we really get creative with this fire?” Perretta says. “What can we do with this fire that will bring the element of surprise?”

Chef Achatz is an institution in his own right. His restaurant Alinea, in Chicago, has had a Michelin three-star rating since 2010 and been a staple on S. Pellegrino’s 50 Best Restaurants in the world since 2007. Achatz is a six-time James Beard Award recipient, among a growing list of accolades, for his whimsical brand of culinary alchemy. You may have seen Alinea’s edible green apple helium balloon or Bacon, Butterscotch, Apple, Thyme, which suspends a single strip of dehydrated bacon wrapped in apple leather in mid-air like a Newton’s Cradle. You may have even been at one of his four restaurants, of which two have Michelin stars, and one, Next, is so exclusive it regularly sees scalpers selling table reservations online for upwards of $500. A pioneer of modernist cuisine, Achatz and his brand have become the Zeitgeist, rather than simply a chef in a restaurant.

So it’s true: Achatz is one of the best chefs of his generation. Perretta knows because he’s worked with a lot of the best chefs — with Ferran Adrià at the legendary elBulli in Spain, and with Heston Blumenthal at the Fat Duck in the U.K.

His first job was local — at Harbour 60, laying out slabs of steak alongside grilled asparagus in the centre of plates — and he was happy for the opportunity.

His first foray into modernist cooking was at Senses Restaurant and Colborne Lane with Claudio Aprile, himself a trailblazer of experimental cooking techniques in Canada. It was a revelation for him.

“Every dish had upwards of 10 components,” Perretta says. “There were knife cuts that were very meticulous. There were sauces and dots on plates that had to be in exact spots.”

Through a connection Aprile had with Alinea’s sous chef, Perretta did a stage for Alinea when the restaurant was just two months old. That started him on a worldwide culinary tour, working at the most impressive kitchens on the planet.

“He had written a letter to the Fat Duck,” recalls Aprile, “and he said, ‘Chef, I’m not sure what I’m going to do. I got a response from the Fat Duck, and I have an opportunity to work there. What should I do?’ I looked at him and I said, ‘You’re fired.’ ”

Aprile recognized this as a pivotal time in the young cook’s career.

“I forced him to resign,” says Aprile. “I said, ‘This opportunity is going to open up every door in the culinary world, doors that you didn’t even know existed.’ ”

At the time, modernist cuisine was gaining global popularity, innovated by chefs like Adrià, Blumenthal, Wylie Dufresne and Achatz. It was treated equally with public fascination and skepticism for its mad scientist techniques, involving the use of liquid nitrogen, dehydration and spherification.

For Perretta, it wasn’t just the chemistry and the cool gadgets that captivated him –– it was the discipline and the meticulousness of the food preparation.

“You’re looking at photos of a place in Spain on the beach and a guy who is making bubbles out of carrot juice and wondering how he’s even doing it. And then all of a sudden, you’re there,” says Perretta. “Really, you’re not there to learn how to make carrot bubbles. You’re there for the discipline and for the repetition of the actual techniques to take hold one day when you become the chef of a restaurant. It’s not about the recipes. You don’t go to these places to learn recipes. You go to be surrounded by like-minded people who just want to keep pushing themselves.”

He joined the Alinea team in 2007. On his first day, Grant Achatz dialed into the restaurant from a hospital in New York via video conference. He announced that he had been diagnosed with stage IV tongue cancer that was rapidly metastasizing to his neck.

“I remember that basically the entire staff immediately started crying,” Perretta recalls. “It was a bleak moment.”

But later that week, he says, Achatz went back to work.

“I remember him being in the kitchen before everybody else, probably at 8 a.m., leaving at 10:30 a.m., when we would arrive, to go to chemo or radiation. And he’d come back, continue to prep, eat staff meal, work the entire night. And we would leave, and he would still be there working,” says Perretta. “He was doing that seven days a week. He was on a mission to not let it affect the restaurant at all.”

As he grows his presence in the Alinea Group, Perretta says he finds it’s harder to come back home. He tries to make it back once a year at least. He’s been following Patrick Kriss on Instagram and wants to try Alo. His parents still live here. But Toronto’s just one city in a much bigger world.

But Perretta is a little more diplomatic.

“I just work as hard as I can, every single day,” he says.