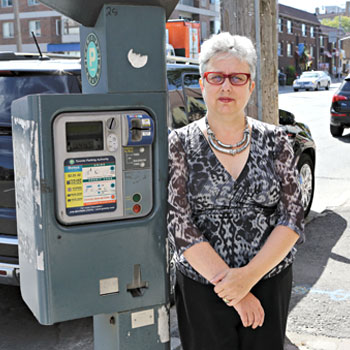 Through the window of her accessories store on Eglinton Avenue West, retailer Maureen Sirois has become used to watching as unwelcome visitors descend on her street and chase her customers away. Some days they come almost every daylight hour, and even a glimpse of their red, white and blue vehicles swooshing past is enough to make shoppers drop their purchases and flee.

For businesses on Eglinton, frequent visits from Toronto parking enforcement officers have become a major headache. As in many other parts of the city, Green P lots are in short supply and businesses consider on-street parking vital to attracting passing customers. But, according to Sirois, who is chair of the Eglinton Way BIA, ticketing on both the main drag and nearby side streets has become overzealous, and the blizzard of yellow tags is making customers see red.

“Enforcement has been a huge problem because we have very, very overly aggressive ticketing on Eglinton Avenue,” says Sirois, adding that officers are out checking on cars at least 10 times a day.

“The problem for businesses is that everyone underestimates how long they are going to be on Eglinton or any street. This heavy enforcement eliminates what I call the dilly-dally factor, where people are tempted to just linger a little longer on the street and maybe pop in and try on a jacket, because they are so worried about the parking enforcement that they just race along to get their car,” says Sirois.

Data released by the City of Toronto and published on the website www.parkintoronto.com shows that, whereas the clogged streets of downtown attract the most attention from enforcement officers, midtown contains a surprising number of hot spots for yellow tags.

The number one location for tickets in the entire city is Sunnybrook Hospital, where parking costs an eye-watering $4.75 per half-hour and nearly 50,000 tickets were written between 2008 and 2012.

Also making it into the top 20 locations city-wide were the library on Orchard View Boulevard near Yonge and Eglinton, where around 11,300 yellow tags were issued; a spot near the Minto towers on Yonge Street, which garnered 10,800; and one on Asquith Avenue near Yonge and Bloor, which received 10,700.

“This heavy enforcement eliminates what I call the dilly-dally factor.”

According to files obtained by the Toronto Star, the city’s top performing enforcement officer operates in midtown around Forest Hill and Eglinton Avenue, and in 2012, he wrote more than 97,000 tickets worth in excess of $4 million to the city coffers.

Councillor Josh Matlow, whose ward includes the stretch of Eglinton from Yonge to Spadina, is one of the more outspoken members of Toronto City Council on parking issues in Toronto. He has called for a number of changes to the way the parking is policed, including the introduction of a clear 10-minute grace period after a meter has run out.

Matlow believes many drivers find it “incredibly frustrating” to find themselves slapped with a $30 ticket just because the lineup at a store was longer than they expected.

“They don’t see any public interest in being tagged for that amount of money for just being a few minutes late,” he says.

Currently, the council and police are at odds over the length of the grace period, with the city believing it to be 10 minutes, whereas the boys and girls in blue insist it’s five.

Drivers who are, say, seven minutes over their time find themselves in a grey area and have to formally dispute the ticket to get it cancelled. Last year, one in four of the 2.7 million parking tags issued in Toronto was nullified for various reasons, including being issued during the grace period.

Matlow also wants to see changes to the way parking enforcement officers are deployed. He believes that too many tickets are being issued on quiet side roads where cars are not causing a problem while the city’s arterial routes are often clogged at rush hour by illegally stopped vehicles.

In July, council approved a motion introduced by Matlow that requires the chair of the Toronto Police Services Board to come up with proposals for reorienting parking enforcement toward major routes.

Matlow pointed to areas such as the Yonge and Davisville intersection, where drivers are often illegally parked at rush hour to drop someone off at the subway, and the stretch of Yonge south of St. Clair, where delivery trucks regularly flout no stopping rules, as locations where enforcement action would actually help keep traffic flowing.

“What I’m asking for on behalf of my residents is for the police to use their resources wisely and allocate them to where they can be best used to serve the public interest,” he says, adding that ticketing on quiet side roads appears to many residents to be little more than a “money grab.”

Pointing out that parking restrictions on many side roads are there because residents asked for them, Filion says many people in his Willowdale ward would be angry if enforcement officers ceased policing their local streets.

“If that policy was adopted, it would upset many residents for whom parking restrictions on their local streets are as important to them as the major intersections,” he says.

Filion believes that a more effective strategy would be to change the law to enable officers to issue a ticket even if they can’t physically put the yellow tag on the offending vehicle.

“Many of the cars blocking major intersections at rush hours aren’t parked; they are just stopping to drop someone off at a subway station or whatever,” Filion explains. “As soon as they see the police car pull up behind them, they just pull off.”

However, responsibility for the necessary laws lies at the provincial level, and so far, calls for change have fallen on deaf ears at Queen’s Park.

But for the retailers and drivers in Leaside, Upper Yonge, and the Eglinton Way, the wrangling between the police, the city and the province is of little interest.

As work on the LRT line gears up and brings with it the prospect of disruption and the loss of on-street parking, shop owners are fretting that the yellow rain will further discourage shoppers.

For retailers like Sirois, the message to the parking authorities is simple: “Call off the dogs.”