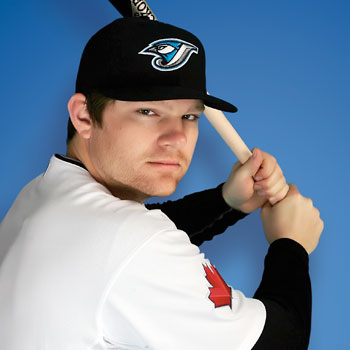 IT WAS THE spring of 2007, and Adam Lind, a skinny, straw-haired kid from Anderson, Indiana, found himself eating alone at a restaurant on Yonge Street.

The future star slugger of the Toronto Blue Jays had just been called up to the big club, and he was terrified. Not so much about his big league appearance — he was confident in his swing and had terrorized pitchers in Triple A — but about being in the big city.

Back home in Anderson, Lind knew wide-open spaces, warm summer nights at the ballpark and knowing just about every face in town. Suddenly, there was honking, flashing, people everywhere and not one face he knew.

“It was a whole new world, man. Nothing like I’d ever experienced before. Unlike Indiana or Alabama or any of the stops I’d had in the minor leagues,” says Lind.

One face, though, stood out. Richmond Hiller Lakeyshia Bertie was dining at the same restaurant that night and noticed the cute guy eating by himself. She had just moved downtown and knew the feeling of being alone in a new place.

“I passed him a couple times and was like, ‘Hey, what’s his story?’” recalls Bertie. “So I went over and talked to him, and he said he was alone in the city and didn’t know Toronto.… It sucks to be in a new city and not know anyone, so I said we should stay in touch and I can show you around.”

That Sunday, Lind called and asked her out; this November, they’ll tie the knot at a ceremony in Toronto.

The marriage will mark the second major contract Lind will have signed this year. In April, Lind accepted a four-year, $18 million extension with the Jays, evidence of the team’s intentions of making the 26-year-old designated hitter a cornerstone of their rebuilding process, and Lind’s intentions of making Toronto, and Richmond Hill, home.

For a city searching for a champion — or even a contender — this was a major coup.

Last season was a breakout year for Lind, who won the Edgar Martinez Award, recognizing him as the best designated hitter in the game, and a Silver Slugger Award, denoting top performance in hitting, for his impressive statistics: a .305 batting average, 35 home runs and 114 runs batted in. Staggering totals for any player, but especially one as young as Lind.

But Lind is quick to deflect credit. “A lot of it was to do with Cito,” he says of the team’s general manager, Cito Gaston. “He’s always talking about having your plan. I found a plan that worked. I could control the strike zone a lot better, which pitches I swing at.”

If he was searching for proof that his “plan” was a good one, he needed to look no further than his performance last September at Fenway Park, home to the Boston Red Sox and some of the most ruthless fans in baseball, when Lind hoisted three home runs over the famous green outfield wall in one game. Suddenly baseball commentators from coast to coast were clamouring about the hottest new thing in baseball.

For any kid who grew up on the sandlot, this was the stuff of fantasy. But for Lind, it was just one more achievement.

“I remember when I got to the big leagues and I could say I played in Fenway Park. And then I hit a home run over the Green Monster.And then two years after that, I hit three home runs,” he says. In fact, Lind looks at his entire career in baseball in the same modest way: never get beyond yourself, simply focus on the task at hand.

“It was always just the next step,” says Lind. “If you do good, you move.… I had success at each level, and you just keep moving up the ladder.”

Had baseball not worked out, chances are Lind would be back in Indiana at this very moment, sitting atop a John Deere, baking in the summer heat and putting the finishing touches on the outfield.

“I enjoy the idea of taking your shirt off, being in the summer sun. I love the design and the smell of fresh cut grass, all that stuff,” he says. Back in Anderson, Lind’s dad, Al, was the town’s resident lawn care specialist, cutting the baseball and football fields, and most of the neighbourhood while he was at it. His dad’s love for cutting grass rubbed off on his son, who considered studying agronomy in college.

Toronto should be proud to have such a humble star to call its own, but that’s a distinction we’ll have to fight Lind’s hometown of Anderson for. To have one of its native sons achieve such success has given his native city of 60,000 something to rally around in the face of school closures and job losses.

“The auto industry was big in our town, and it started taking a hit here years before the recent economic collapse,” says George Bremer, a sports reporter for Anderson’s Herald Bulletin who has covered Lind’s rise since high school.“Adam provides a bit of good news for everyone. He’s an example that good things can and do come out of Anderson.”

When Lind’s feeling a bit homesick, a trip to Bertie’s parents’ place at Bayview and Major Mackenzie reminds him of Anderson.

“I enjoy it because we can get away from the big city, [and it] feels a bit like I’m back home. It’s a neighbourhood,” he says. “It’s nice to see a front yard, backyard, fence. We can let our dog out to run around a bit. But there’s a lot of people everywhere, even in Richmond Hill.”

There’s an added bonus in the clubhouse, too. His new connection to Toronto gives him a leg up on his teammates. “A lot of the guys on the team, they know the Rogers Centre and the three blocks around there. But you know, I can go to, well… Richmond Hill,” he says with a laugh.

Lind is thankful to his dad for helping him get to where he is now. “He was the perfect dad when it comes to playing with your son. Whenever I wanted to go outside and hit baseballs, he would throw to me.

There were some days he really didn’t want to: You know, he’s an old man taking naps, and I’d have to wake him up and he’d say, ‘Not now,’ but for the most part, whenever I wanted. Not a lot of kids’ dads would do that,” he says.

The Jays must be thankful to the senior Lind for the extra batting practice. They’re hopeful, too, that junior can continue to produce as he did last year. The Jays are off to a hot start, and currently sit third in the competitive American League East.

As for Lind, his start has been slower than last year, though he is on pace to reach significant totals: 23 home runs and 84 runs batted in. But the expectations go both ways, says Lind.

“Hopefully by the time my contract’s up, we’ll have done some damage, been to the post-season and hopefully won a World Series. These things are a process. Hopefully I’m not like that college senior when a new basketball coach comes in. You know, you do the hard work, and then all the glory comes when you’re gone. So I hope we get it done while I’m still here.”

If not, there are still at least two reasons to come back to Toronto. It’s his fiancée’s hometown, for one, and he says the Rogers Centre grounds crew have told him to give them a call after his playing days are over.