Adam Korson: the star of CityTV’s new sitcom Seed dishes on family values and why he’s still a Thornhill kid at heart - Streets Of Toronto
Skip to content 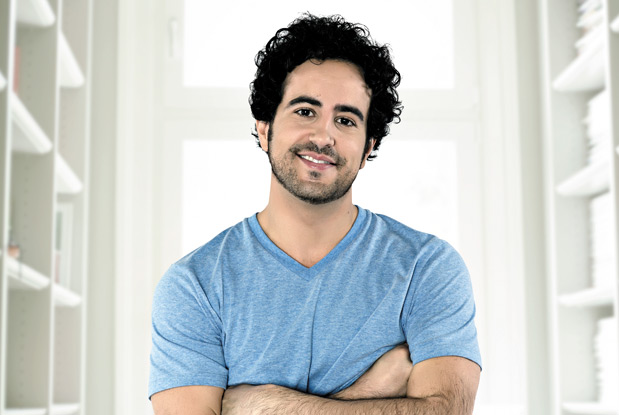 Adam Korson is a man who talks a lot about sperm. Not in a pervy way, he just has a lot to say on the subject. Especially when it comes to the issue of sperm donation.

“Sperm donation is just so relevant right now,” says the Thornhill-born actor. “People go to these clinics because they need them. They want to raise a family, they want kids, but they can’t, either because they’re gay or because physically they’re unable.”

Korson is sitting in a downtown bar talking about guys and their swimmers because he stars in Seed, a new sitcom on Citytv that starts airing this month.

Korson plays Harry, a thirtysomething barman whose life of easy sex and video games gets rudely interrupted when the results of his deposits at a sperm bank years before start showing up at his door.

Courtesy of some computer hacking that would have caused consternation anywhere other than in the world of sitcoms, his offspring are able to track down their sperm-donor father.

First to arrive is nine-year-old Billy, who is being raised by a lesbian couple; then comes Anastasia, a troubled teen whose life is being ruined by her neurotic professional parents; and finally there’s the highly strung Rose (played by Scarborough-born Carrie-Lynn Neales), who’s pregnant with yet another of Harry’s kids. It’s a study in modern family values.

“What attracted me to the show is that it wasn’t the typical Leave It to Beaver family,” says Korson. “We live in a day and age where there are unique families. There are all these different facets that we live in now, and it’s nice to see that being shown on television.”

Korson believes that one of the strengths of the show is that, despite the complex family structure, the characters still remain relatable.

“What attracted me to the show is that it wasn’t the typical Leave It to Beaver family.”

“The whole show is really about what your role is as a parent. What does it mean to be a father and how does that change or stay the same if you are biological or a stepmom or stepfather?” he says.

The 13-episode season was filmed in Halifax over a three-month period and the show is an almost totally Canadian production. The entire cast comes from north of the border, including child actors William Ainscough (Billy) and Abby Ross (Anastasia).

“With anything you always have to be on top of your game but more so with the kids,” says Korson. “They’ll throw you curveballs without knowing they’re throwing you curveballs. But we had a blast — because I’m a kid myself.”

When we meet, Korson is in Toronto promoting the show and visiting his family. For the last four years he has been living in Los Angeles, and Korson laments his lost resistance to the Canadian winter. “When you’ve been away for a while, you really start to feel it more,” he says.

Although Seed explores many of the different ways of successfully raising kids, Korson’s own upbringing followed the nuclear family model. One of three kids, he was raised by his parents — who have been married for 36 years — in Thornhill where his family still lives.

“What’s nice about Thornhill is that there is such a sense of community. We were all so close together,” says Korson, reminiscing about evenings spent at friends’ houses or snowy afternoons tobogganing at Huntington Park. (“It was better when you were, like, six,” he admits.)

“As a family, every Saturday night we would order pizza and watch movies. Usually we kids got to pick one and my parents picked one. We’d pick a more recent film, and my parents would pick a classic, and so I was introduced to film history at a very young age — Hitchcock and Casablanca and all the great classics.”

A graduate of Toronto’s Randolph Academy for the Performing Arts, Korson set out to be an actor from an early age. Although in childhood he wanted to be a lawyer, a doctor or a football player (“I still do — I’m in training,” he jokes), those family movie nights soon persuaded him that his future lay on the screen.

Although he says he was somewhat shy as a child, the signs of an actor were always there.

“I remember in seventh grade, my teacher told the class we were going to do a presentation on an explorer,” he says. “In my mind that translated into: ‘one-man show.’ So I wrote and performed a one-man show on Christopher Columbus.

At Thornlea Secondary School, Korson became heavily involved in the drama club, working on one-act plays and productions of shows such as Goodnight Desdemona (Good Morning Juliet) and Dark of the Moon. “It was nice to be involved there. We had great support, great teachers,” he says.

Korson comes across as a friendly, down-to-earth kind of guy. He’s good-looking but has curly, slightly riotous hair that gives him a hint of the dishevelled. He’s the perfect choice to play Harry, a character that so easily could have come across as a complete jerk in the wrong hands.

Having put in a series of guest performances in shows including 2 Broke Girls, Normal and Emily Owens MD, this is Korson’s first leading role. That’s a big deal for any actor, but more so for Korson who had to work hard to get his career back on track after an eye injury playing hockey stopped him acting for a long period in the mid-2000s.

Once he’d recovered, and with Toronto’s TV and movie industry still in the doldrums after 9/11 and the SARS outbreak, he decided to head for L.A. and really make a go of his acting career. “I thought ‘If not now, when?’ ” he says.

Korson’s relocation to California was a life move. “I was moving because that’s where I wanted to spend my life,” he says. Since many auditions these days are done by sending over video clips (that’s how he landed his role in Seed), Korson doesn’t need to come back to Toronto often to pitch for roles with companies like CBC.

But when he does get back to town, you may see him mowing down on some midtown chicken. “Duffs Famous Wings at Bayview and Eglinton, that’s my spot to go to,” he says. And if you do see him there, you won’t be stuck for a conversation topic. Just talk about sperm.