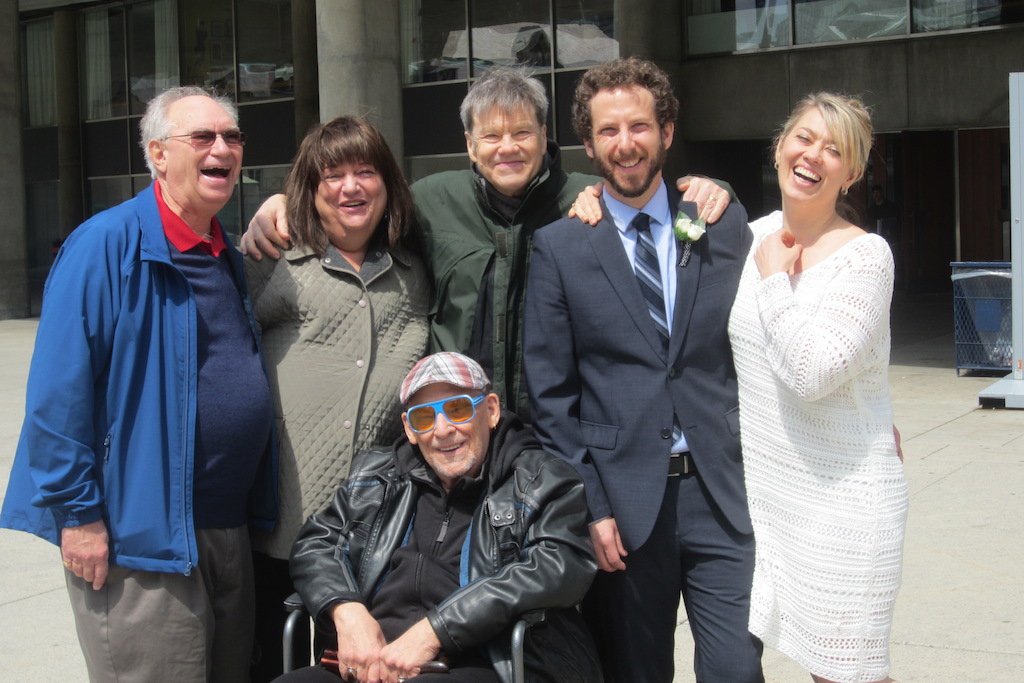 After wrapping up her role on the sitcom Mr. D as everyone’s favourite gym teacher, Bobbi Galka, Naomi Snieckus has moved on to other projects. Catch her on the big screen this month in her new movie Canadian Strain which hits theatres in Toronto on March 20. Here she gives us the inside scoop on what it’s like when two comedians (her and husband Matt Baram) fall in love.

How they met
We met at Second City Toronto — it was love at first laugh!

The proposal
It was my birthday, and Matt had planned to take me out for a fancy dinner. When it came time to go out, I said to Matt: “Wouldn’t you rather just order Chinese food and watch a movie in our pyjamas?” He said, “Well, yes.” His lack of enthusiasm confused me. He loves Chinese food. He agreed to change our plans on one condition: I come with him to pick up dinner. To which I agreed, also on one condition: I’m not getting out of my pyjamas. So, we grabbed Chinese food, and on the way home, he convinced me to sneak into a bar and have a fancy cocktail in the corner. It was my birthday after all. We snuck into the Soho Hotel, and as we parked in the underground lot he said, “We’re actually staying here tonight!” What fun! Luckily, I had my “nice” pyjamas on, the kind that people may think I was wearing to a yoga class. He showed me to our room that he’d set up earlier with strawberries, champagne and lovely music. I burst into tears. “Since you’re crying already.…” And he bent down on one knee and proposed to me. I sat down on the floor with him, and we both cried at how lucky we were. Then, we had Chinese food. It was kind of perfection.

The wedding
We got married at Toronto City Hall. Not so fancy, but we were getting our green cards so needed it to be speedy. I thought it was going to be a quick signing of paper, but it ended up being incredibly moving. Our dear friend Dov Mickelson was able to take off time from rehearsals and be there. He put on some Ella Fitzgerald in place of the organ music. Matt’s aunt and uncle happened to be in town, so they were there too. Then our two fathers were present, and we did some really great awkward photos in the square out front. It was exactly right.

Balancing careers and marriage
This is a constant juggling act. Like, if we were in the circus, we wouldn’t be juggling chainsaws, bouncy balls and apples. We’d be juggling show producing, acting careers and improvised podcasts. Matt and I are partners in everything: writing, improv, producing.  We’ve figured out our roles when it comes to creative stuff, but are always juggling life and art. Sometimes date night turns into a production meeting.

Shared hobbies
This is tricky because the line between hobbies and career is blurry. We produce our own comedy shows and our podcast Baram & Snieckus, so that is something we share. We also have a little cottage that we love fixing up. We spend most hours in the day together, so pretty much everything is shared! Is cleaning the fridge a hobby? We share that too!

The home
We live in Little Italy and have for more than 10 years. We love it!

Secret to success
Laughter. I mean, doesn’t that go for everyone? Joanne Woodward said: “Sexiness wears thin after a while and beauty fades, but to be married to a man who makes you laugh every day, ah, now that’s a real treat.” I know I’m lucky to be married to a man that makes me laugh every day. Even if I don’t feel like laughing, he finds a way. And to be onstage with him and see people enjoying his comedy genius is equally rewarding. So the secret? Laughter. And knowing when to go out and have a coffee date on your own. Absence makes the heart grow fonder, even if you’re only gone for an hour!