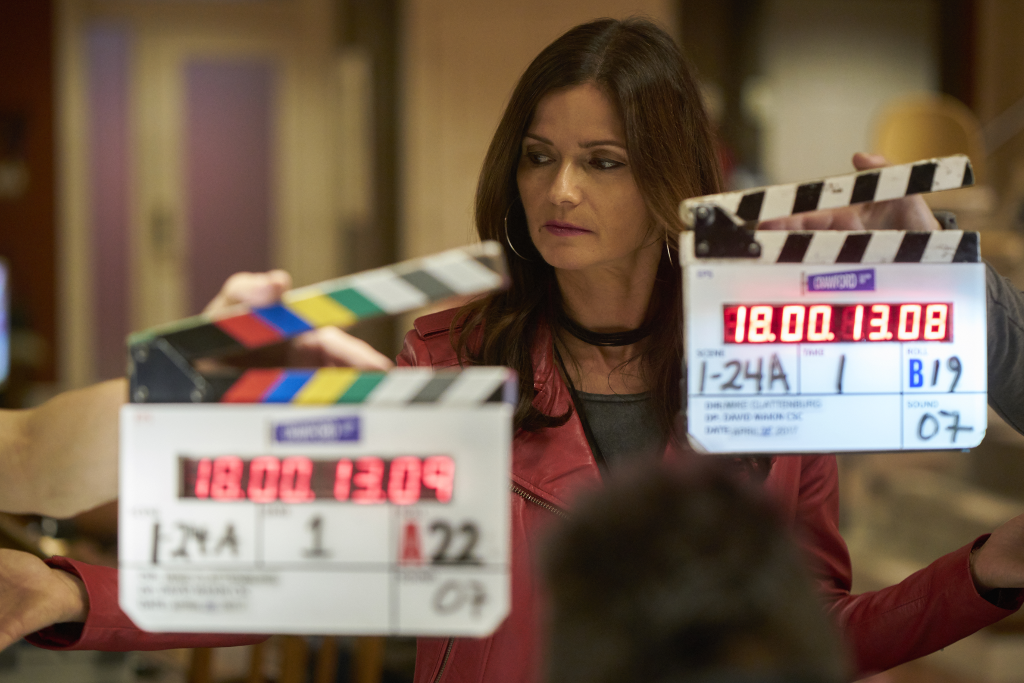 Born in Edmonton and raised all over Canada—from Burlington to Cranbrook, BC—actor and musician Jill Hennessy always knew she loved performing, but she never thought she could do it as a career. It wasn’t until her grade twelve drama teacher singled her out for the drama award that she realized she just might have the chops to make it as an actor.

“I thought, ‘you know I would love to try this acting thing. I’ll give myself a year, I’ll go to Toronto and I’ll see what I can do. I’ll waitress, I’ll do whatever I can,’” she says.

As it turned out, her gamble didn’t pay off right away, and she spent a few years in the city working odd jobs and busking until she landed a gig in a play bound for Broadway.

“I didn’t get that much work. It would have been nice if I did. I worked at the Eaton Centre as a waitress and as a bus boy and I played guitar in the street, which was great. Then I got a job in a play that was going to Broadway, which was great because they were looking for musicians and actors, so that’s what sort of got me on that road,” she says.

In New York, Hennessy rubbed elbows with the city’s music crowd. She met other musicians and played in a few bands in the West Village until she landed her role as Claire Kincaid in Law & Order. The actor says the show’s rigorous shooting schedule left her little time for music, and she set it aside for a while to focus on acting.

“I didn’t really return to playing until I started writing my own music,” she says. “I’d always been too terrified to write my own lyrics and I guess it wasn’t until I was working on a show called Crossing Jordan and had my first child and went through some life stuff that I started writing, and it was the writing that helped me deal with everything that life was throwing at me.”

Now, with two studio albums under her belt, ‘I Do’ and ‘Ghost in My Head,’ Hennessy’s career as a singer/songwriter has taken off. The artist says her husband has been her most fervent supporter throughout her development as a musician.

“My husband was a huge part of that, he was like ‘you’re good, just put it out there.’ He’s been a great supporter and proponent of that and getting me out of my insecure box to come out and just do it,” she says.

Hennessy recently finished shooting the first season of Crawford: a quirky Canadian comedy about a dysfunctional family with a raccoon problem. In it, she plays the mom of the family—a busy cereal executive with a husband who has lost his ability to speak, a young personal trainer boyfriend and three children.

“The raccoons invading the home in the first episode throws everyone into chaos in a necessary way. It was necessary to upset the balance of this family to reinvigorate relationships. The raccoons are the instigators of a lot of really good positive stuff and a lot of comedy. It’s really emotional and it’s hilarious,” she says.Hennessy says one of the show’s highlights is its mostly-Canadian cast and crew. Alex Lifeson of Rush plays her character’s boss at the cereal company, while Mike Clattenburg and Mike O’Neill of Trailer Park Boys are two of the brains behind the show’s script. She says the cast dynamic made for plenty of spontaneous improvised moments in the show.

“We got to know each other really fast in an intense way just by playing. You’re sort of thrown into it, you’re doing nine, ten pages a day and it’s sort of like, ‘let’s try this, let’s improv that,’ so it was nice to be in a collaborative atmosphere with Mike Clattenberg and Mike O’Neill, who I adore from Trailer Park Boys,” she says. “I love their sensibility and that tone you’ll see throughout Crawford, a little bit of that bizarre, dysfunctional-functional aspect and just hilarity.”

The show was shot in Toronto over a three-month period last spring, and Hennessy says that although she lives in New York now, she still always appreciates coming back to
visit the city where she got her start.

“I love hanging out near Ossington. That area is just smoking hot right now. I went out with the cast there to a tequila bar and we went to a place called Squirly’s on Queen Street West, which was just awesome. There are so many great neighbourhoods in Toronto, I was frustrated I couldn’t visit them all while I was here,” she says.

Hennessy also cites Trinity Bellwoods Park, the Beaches and the AGO as some of her favourite Toronto haunts. Mostly, though, she works: her roles as an actor, musician and mother keep her busy enough. She says her most recent acting project is a Netflix TV series called Yellowstone.

“I’ve been working on a show for Netflix that Taylor Sheridan is writing and directing—he did Wind River and Hell or High Water,” she says. “He’s a tremendous writer and director. The show is dealing with a lot of the issues within the Native American community and shining a light on it—things you never see in TV and film. It’s really good to see.”

As for music, Hennessy says she recently returned from a tour in Italy where she performed in the Cortona Music Festival, and she’s been working on some new songs, too.

“I’ve been writing a couple more songs. I always go through that phase where I’m like ‘I’ve got a new song but I’m afraid to play it for anybody.’ Maybe if I play it in an empty room,” she says.

Crawford is available to stream on Feb. 2 at cbc.ca/watch and on the CBC TV app