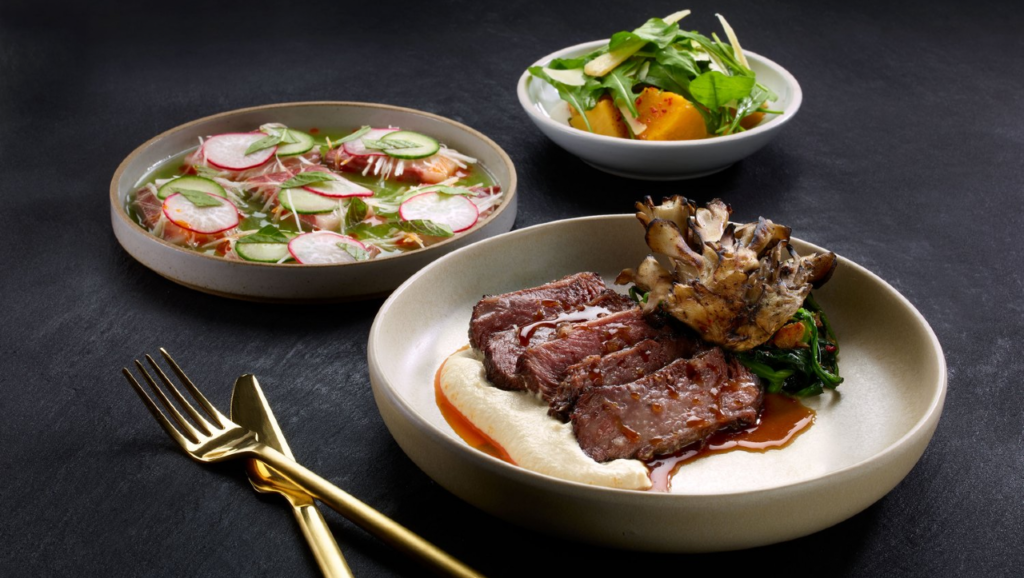 A new restaurant offering European dishes with a Korean spin is moving into 156 Cumberland, the site of former French restaurant, Chabrol, who temporarily shut its doors earlier this year due to ongoing strain posed by the pandemic closures.

The new spot, named after its street address, is an intimate space with chandeliers and gold accents echoing the upscale Yorkville neighbourhood it now calls home.

With indoor seating that fits up to 40 people, patrons can cozy up for dinner, selecting from a refined list of appetizers, mains and desserts – all made in-house using fresh, seasonal ingredients.

Start with beef tartare, complete with fried tofu skin and Gochujang for a kick of spicy-sweet Korean flavour. Follow up with one of two main dishes, like the Halibut complemented by charred kale, celeriac and seaweed butter.

Sweeten the deal by finishing things off with brown butter cake, topped with poached pears and homemade burnt honey ice cream. Imbibe? A selection of wine, beer and cocktails are available, too, with half-priced wine on Wednesdays.

Owned by MJ Jeong, former chef at now-closed Queen West restaurant Cannis, opening 156 Cumberland has been a lifelong dream, though, not without its risks.

“It scary seeing so many restaurants close down the past few years, but it was my lifelong goal to open my own restaurant so when we were given the opportunity, we took it without a second thought,” says Jeong, who has been running the restaurant since October with help from his wife Jennifer, a health care professional who took a leave to focus on this new venture.

Chef Jeong has always has a vested interest in food. He grew up in Yeosu, a small ocean town in the most Southern part of Korea, well known for its food culture. Learning to cook from his mother and grandmother, he went on to pursue a career in the food industry, working all over Korea before coming to Toronto. All along, he knew he wanted to combine his love for traditional European dishes with the tastes of his home country in a place he could call his own.

Chef Jeong plans to rotate the menu seasonally and will eventually offer patio-seating for the warmer months of the year.

Swing by 156 Cumberland for dinner Tuesday – Saturday from 5 p.m. to 10 p.m. for contemporary Euro-Korean cuisine in the heart of trendy Yorkville.