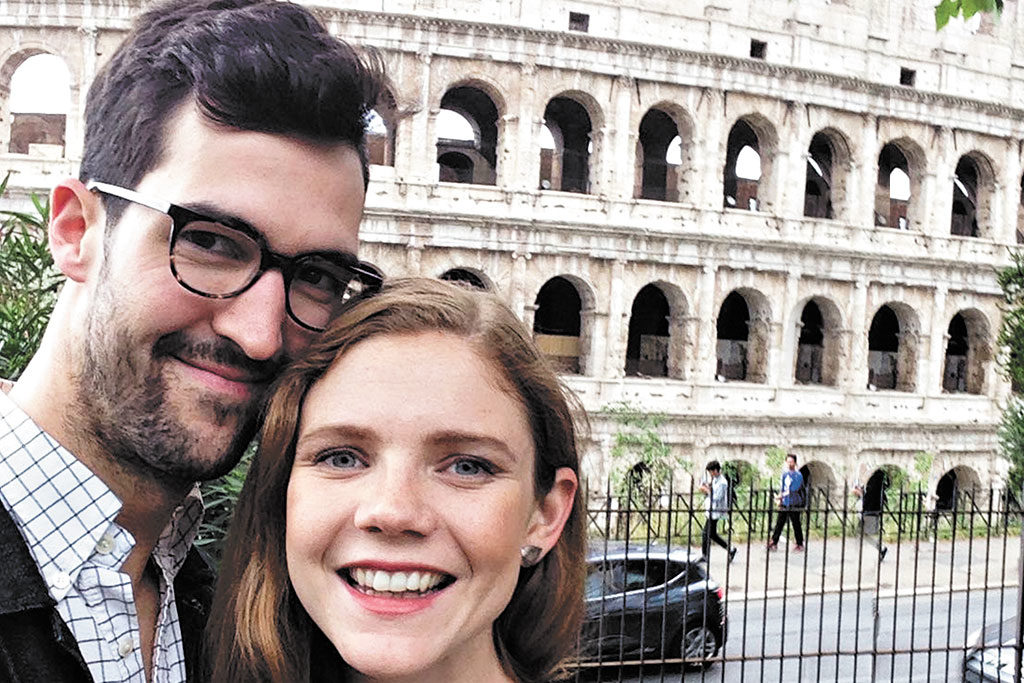 How they met
Kate: We met at George Brown Theatre school. We were in the same class for three years and started dating toward the end of second year. Nothing like a few romantic scene studies to get that spark going!

The first date
Fraser: Well we were friends for a year and a half before we started dating and went on outings together that were emphatically not dates. Our first official date was a trip to Rainbow Cinemas Market Square to see One Week. That movie date was on a Friday, and that weekend Katie’s parents were away, so we spent the weekend house-sitting for them. We were both afraid that we’d get sick of each other if we spent too much time together, but it didn’t happen. We’re still waiting.

Memorable moments
Kate: That first summer, Fraser had plans to live and work in Ireland. He was set to leave a month and a half after we started dating. One day we went for a walk down Cherry Street, sat on a pier and had a nervous conversation about whether we would stay together for the four months he was away. We were trying to be so careful, but really we were in love and wanted to be together, and so we agreed, and that was that. Also, one time we had a “night of many bars” where we put our favourite bars on pieces of paper and drew them from a hat. We went to four different bars, ate and drank a bunch and ended up on the bleachers at Central Tech singing “Moulin Rouge” at four in the morning.

“I hope we’re onstage or on set until our dying days, working and creating together.”

The proposal
Kate: It happened while we were reading our books and drinking coffee on a blanket at Ashbridges Bay, which is something we love to do, both ordinary and spectacular on a sunny July day.

The wedding
Fraser: We got married in June of 2016 at Runnymede United Church. The reception was at Katie’s family’s house, the place she grew up. Her parents and brothers made the yard look beautiful, and the neighbours graciously allowed us to tear down part of the fence and use their backyard as well. There were oysters and a big tent and many wonderful people. For our honeymoon we ate and drank our way through Italy for three weeks.

Balancing careers and marriage
Kate: We sort of short-circuit that problem by working together when we can. We’ve created short films together, made theatre together and are currently in rehearsals for Mary’s Wedding, a gorgeous Canadian play about love and the First World War.

Shared hobbies
Fraser: We love to cook together. We have a tiny little kitchen, but we like being in such close proximity. Katie recently took a Vietnamese cooking course at George Brown College, and I’ve been exploring Sichuan cooking, and we’re learning from each other.

Secret to success
Kate: We’re lucky in so many ways. We love being around each other, we can talk for hours, we have many of the same ideals. We talk about our relationship a lot, about how we got together and fell in love. If some problem arises between us, we address it quickly. We both try to be as generous as possible with our time and energy and strive to think constantly about what we can be doing for each other.

Life after retirement
Fraser: Retirement? Ha! I hope we’re onstage or on set until our dying days, working and creating together.

Mary’s Wedding is on at Streetcar Crowsnest from Jan. 31 to Feb. 16.