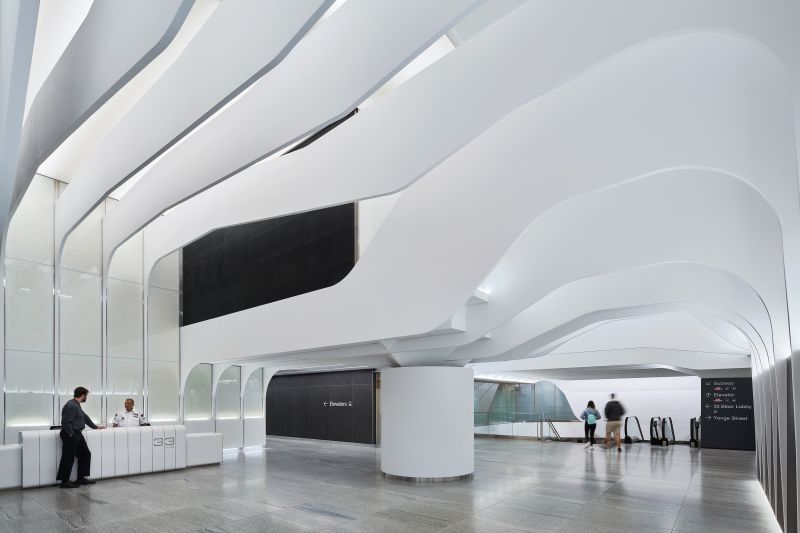 Toronto’s busiest subway interchange has been crowned a winner of an Architecture MasterPrize (AMP) Design of the Year Award in the transportation category. Now in its sixth year, the AMP honours designs in the disciplines of architecture, interior design, and landscape architecture with the goal of advancing the appreciation of architecture worldwide.

Located on the first floor of a 17-storey building at 33 Bloor St. E.  and built above the Bloor-Yonge subway station, the ground level of the office tower received a $25 million futuristic redesign back in 2020, courtesy of WZMH Architects, with Andrea Tocchini at the helm.

The hefty price tag included the reconfiguration of the existing public and retail areas and the creation of a southern entrance that improved street presence and helped to alleviate congestion at the heavily used northern entrances to the subway.

For the architects at WZMH, the vision was clear.

“Urban densification, the emergence of transit hubs and the need to move people efficiently and comfortably have created opportunities for new architecture that moves people well, celebrates the importance of public transit, while enhancing the experience of transit users,” the company stated on their entry submission.

Describing the aesthetic as a “serpentine cosmopolitan of organically shaped ceiling arches” these then act as a natural wayfaring system linking the access from three adjacent streets to the main lobby.

Beating out contenders from all over the world, the ultramodern space boasts soaring arches that usher pedestrians into the building.

“Like waves they move along the north/south corridor, animating the space, directing people naturally to the subway platform entrance,” WZMH Architects explained. LED lighting enhances the arches which are flawlessly clad in the solid surface material.

The AMP jury panel consisting of top designers, architects, curators, and academics were impressed by the innovative concept and scope of the project.

“In this Toronto transit hub, interior design and lighting work seamlessly together to create a striking and flowing ribbed ceiling installation.”

Other Canadian AMP winners included The Sustainable Energy Engineering Building at Simon Fraser University in Surrey, B.C. in the educational buildings category, the Laurentian University Student Centre in Sudbury in the institutional architecture category, and the Grand Théâtre de Québec in the Restoration and Renovation category.