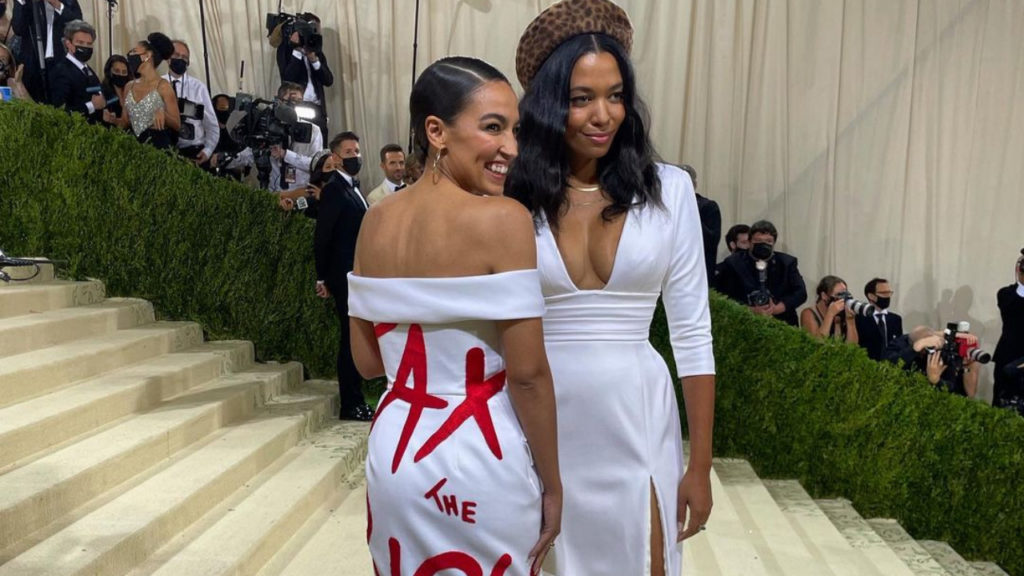 Unless you’ve been on a social media cleanse, it’s hard to miss that the 2021 Met Gala has been the talk of the internet ever since it happened on Monday. And headlining the coverage is the jaw-dropping dress worn by U.S. congresswoman Alexandria Ocasio-Cortez. Though you’ve probably seen the dress a hundred times by now, you may not realize the designer, Aurora James, is a Toronto local.

From the front, AOC’s dress is a simple, off-the-shoulder, white mermaid gown. But on the back, sprawled in a hard-to-miss red print, reads the line “Tax the Rich.” In the nook of her elbow, a red purse has the same words printed in white.

The dress comes from the fashion label Brothers Vellies. James, who invited AOC to the gala, began the label in 2013 at flea markets around New York. Through footwear and accessories, Brothers Vellies continues to work alongside artisans and craftsman across Africa and South America to highlight and celebrate traditional designing practices.

Aurora James is also started the 15 percent pledge initiative, to encourage people to buy from Black-owned businesses after the death of George Floyd.

Though the statement made on AOC’s dress was the talk of the gala, it has had some controversial feedback. Critics have called the move hypocritical considering the congresswoman was invited to freely attend the event created for the wealth with tickets costing over $30,000 each.

Viewers are taking to social media to express their outrage, calling the message tone deaf.

Wearing a “Tax the Rich” dress to an event surrounded by some of the richest people in America and largely funded by multi-billion dollar businesses, perhaps isn’t the statement you think it is, @AOC. #metgala pic.twitter.com/KDwgJDxspS

Others, on the other hand, are in support of the critical message and think the gala was the perfect platform for social change.

For anyone giving this upstanding young woman flack about, “Yeah, at a $30k/head party? Hypocrite!”

My response is this:
What better place to spread the mantra of Tax the Rich than at such an event?
—-
Bless.❤️💯 pic.twitter.com/IrzDg6uOYG

James, however, is unphased by the controversy.

“Fashion at its best is a tool to express ourselves, share our cultural identities and challenge ideas and norms,” James wrote in an Instagram post. “With access comes great opportunity. We can never get too comfortable in our seats at the table once they’ve been given.”