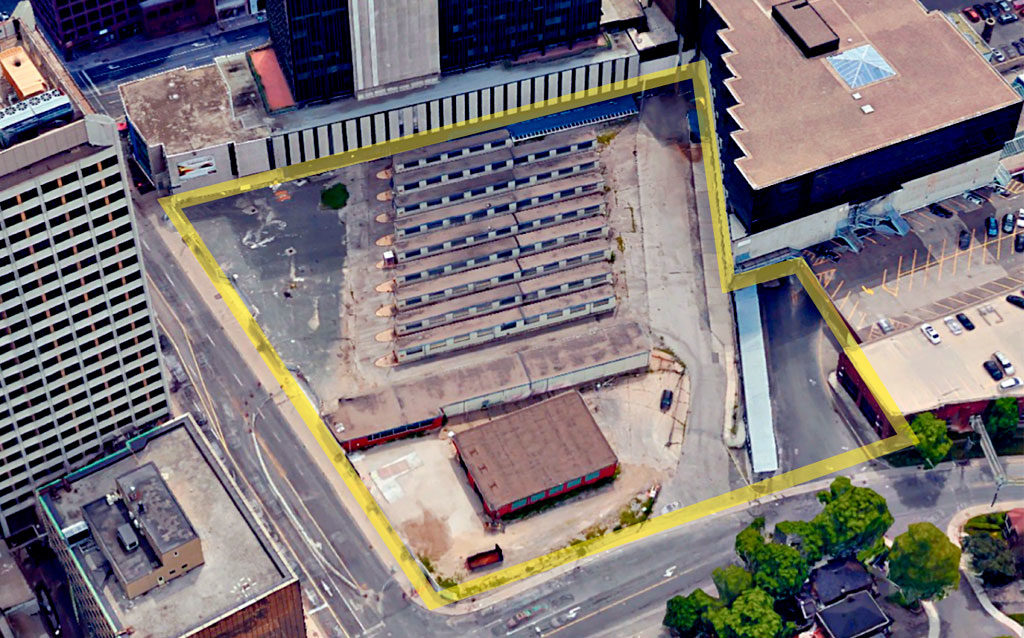 The rate of development in Midtown Toronto is outpacing much of the rest of the city. And it shows no signs of slowing down with the Eglinton Crosstown LRT line only increasing the pace along the transit corridor.

Thousands of new residents are piling into towers that are sprouting up like towering glass weeds around Yonge Street and Eglinton Avenue. It is a neighbourhood that has already been deemed park deficient by the city, having far less space per thousand residents than other neighbourhoods — and there seems to be little hope for open space relief on the horizon.

Parks are overrun with people. Finding a square of greenery to toss a ball around with the family on a summer weeknight at Eglinton Park is a monumental undertaking that requires shrewd negotiations and some creative use of space.

And without the addition of enough green space to accommodate activities beyond a swing set and a fountain to fill up Fido’s portable water dish, it’s only going to get worse.

As a result, local councillors, such as Josh Matlow, have done their best trying to carve out a little open space by purchasing slices from places such as Manor Road United Church. That sale facilitated improvements to the church and secured some green space for locals. Matlow is also behind the city’s purchase of the Glebe Manor Lawn Bowling Club site for $3.5 million.

In addition, Matlow managed to pass the creative Midtown in Focus plan through Toronto City Council that will dot the neighbourhood with tiny bits of green and ever-so-slight public squares, which is certainly something.

But there is another site, one that the city already owns, that could provide the burgeoning Midtown area with a true destination park that its population demands. It is an opportunity to craft a truly special place for future generations to enjoy.

The Toronto Transit Corporation (TTC) lands at Yonge and Eglinton are likely the last opportunity the city has to create that space for its residents.

“We have an historic opportunity,” said Matlow, “to create a grand public space here: not just another concrete square, something green and beautiful both for the city at large and to be enjoyed by the local community. And that’s what great cities do. We need to measure up. This wouldn’t even be debated in Chicago or New York.”

The lands are almost surrounded by condominium and office towers proposed, under construction or recently built.

The area is divided into four parts, as part of the planning process, including an area already occupied by buildings, which have long-term leases held by the development company Oxford Properties; the old TTC bus terminal area to the west of Yonge that extends to Duplex Avenue; and the area of the temporary bus terminal, office building and parking stalls to the south of the site that angles to Berwick Avenue to the southeast.

In Midtown Toronto terms it is a massive development site with a correspondingly massive land value. But the only real obligation the city has is to the development of new and replacement transit infrastructure.

“There is a huge population at Yonge and Eglinton already and as many as 45,000 new people added in the next 20 years and no parks,” said Terry Mills, an urban planner and Midtown resident who was part of a working group that began work on the site in 2003. “Meanwhile, the area is already deficient in parkland, so there really is a premium to be looked at there.”

The city is already putting the land in the hands of development agency Build Toronto, and it’s that agency’s job to get the most financial benefit from a development site.

Yes, a public square has been mentioned as a requirement of any development. But some might ask why it is already a given that the site needs residential and commercial development.

Opening the rest of the site up to development and carving out a little park while paying market rates for tiny squares of green throughout the neighbourhood seems almost counterintuitive.

“It’s a neighbourhood that is growing so much and has already got such limited green space and limited opportunity for the addition of significant pieces of space,” said Dave Harvey, the founder and executive director of Toronto Park People, Canada’s first citywide park organization.

“Even with what little there was on Yonge and Eglinton, having lost that square on the north side, I really hope something can be worked out.”

Harvey explained that he had encountered a similar — though much smaller — site on Richmond Street that was also in the hands of Build Toronto. A strongly focused community worked in tandem with the local councillor to win the day, and they were rewarded with an expanded park and community spaces for their neighbourhood.

Harvey said that he thinks Coun. Matlow is up to the task.

“Build Toronto will do what they are told to do,” said Harvey. “It will take strong leadership from the councillor so there is not a big public fight.”

Mills said that, in his experience, with all the competing interests on the site, it is a very complicated block.

“In that area there is a lot of leg wrestling involved in it,” he explained. “You can come up with this or that conceptually, but it will be something that comes forward to council many times in many different forms.”

Matlow seems disinterested in playing the usual game that allows developers to use the Ontario Municipal Board as leverage to crowbar in the marginal mixed-use developments, which add little value to the public realm, or chip in a few million dollars to a listless parkland acquisition fund that allows the city to buy cheap green space in the fringe areas of Toronto, only adding to the problem.

“I have made it very clear to Build Toronto that I have asked them to go and get a written commitment from Oxford, the developer, to waive rights of appeal to the OMB,” he said. “This is one of few lands the city has leverage over with respect to redevelopment.… Essentially, I want to have them just say yes to whatever we tell them.”

And according to Matlow, he is cooking up something special on the southwest portion of the site.

“I expect to have a remarkable public space there,” he said. “It will be public realm more than a public square, and it will be green space but also a destination for farmers’ markets and that sort of thing.”

Late last month, city council’s executive committee was scheduled to meet to establish the interests that will be at the table and start the ball slowly rolling on what could be a monumentally important project.

“The item on executive committee does nothing more than gives council’s nod to begin work in earnest to work details out that ensure the urban planning vision is supported, the community respected, a public space created and transit plans that work really well and also don’t sanitize the rest of the site, ” Matlow said.

What happens after that might have a lot to do with political will and community involvement. And that’s where you come in.